Now tied for the worst record in the NL, the Phillies look for some wins against one of their fellow bottom-dwellers. Jimmy Rollins needs four hits tie Mike Schmidt, and five to set the new team record. 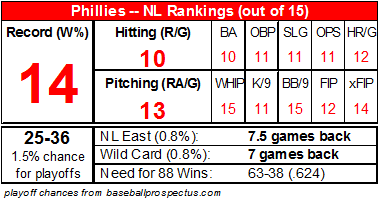 Will soon need more decimal places to show the chances of making the playoffs.

- lost 8 of 9- lost 22 of 32 since May 4th, when they were 15-14- tied for worst record in the NL with the Cubs, at 25-36- worst run differential per game in the NL (Arizona has a larger total differential, but have played 5 more games)- 2nd worst pythagorean projection in the NL, ahead of only the Padres (only because losing 4-2 is worse than 5-3 for purposes of the pythagorean expectation)

Padres
At only 3.10 runs scored per game, there isn't anyone close to the Padres' offensive ineptitude. Even their wRC+, which adjusts for pitcher-friendly Petco field, is the worst in the league. 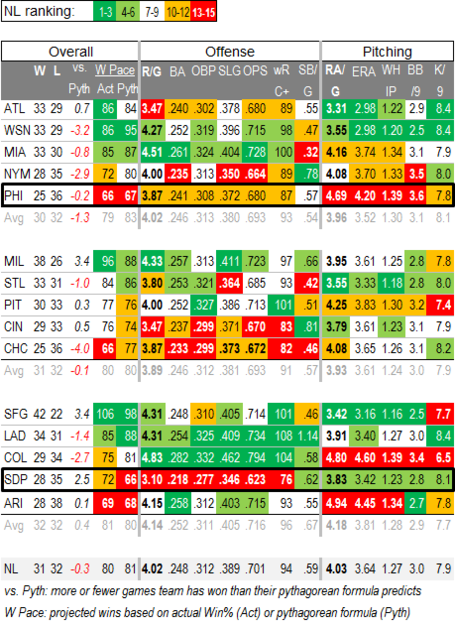 Phillies Team Stats vs. 2013 and vs. the Padres

PhilliesThe Phils are next to last in the NL in fWAR by position players (just ahead of San Diego), and both hitting and fielding are contributing:

If one's looking for things to cheer, they've grounded into the fewest double plays in the league. Yay!

Padres
San Diego's offense is at or near the bottom in virtually every hitting category. They are fifth in stealing, though. 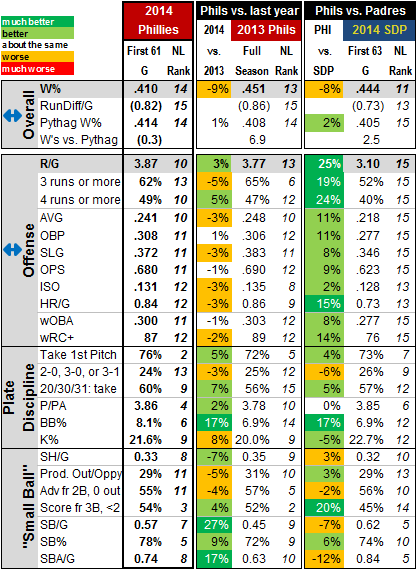 The Phillies' average runs per game has declined from the middle of the pack to below average over the last two weeks, and it's due to declines in each component of hitting:

BABIP, and Batting Average along with it, have been steadily falling since May after a hot start.

Isolated Power improved some in May but has stalled below the league average and even dropped some.

And the walk rate has dipped to the league average over the last week or so. 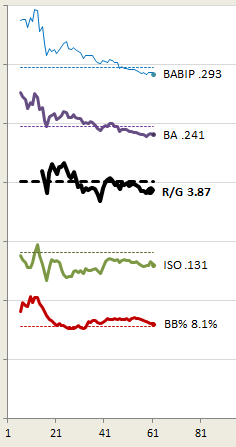 Padres
Even adjusting for their pitcher-friendly park, the Padres have a staff that has been at least average, and maybe somewhat better.

For the weekend series, the Phils will be facing:

Their fielding has also been about average, i.e. much better than that of the Phils: 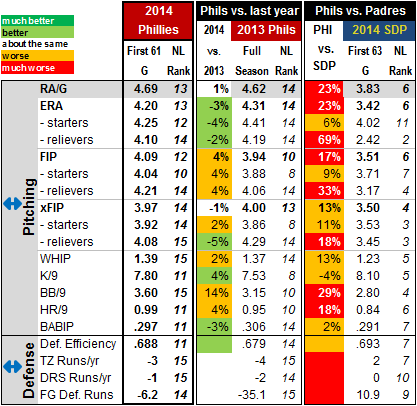 Not a lot to be excited about in recent weeks, with Mayberry the only player to record a .900 OPS or better in the last 30, 14, or 7-day periods. 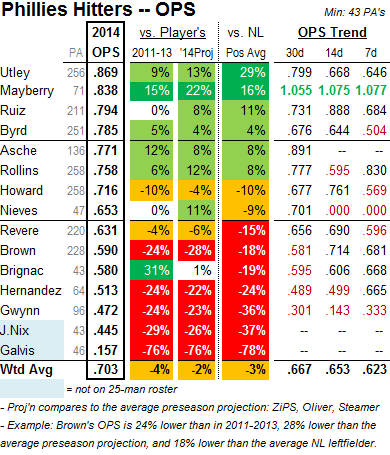 1974: Mike Schmidt hits a ball off a public address speaker suspended from the Astrodome roof--117 feet up and 300 feet away from home plate. The ball bounced back onto the field, and he settles for a single, and the Phils win 12-0.

1981: Pete Rose singled off of Nolan Ryan to tie Stan Musial's NL record of 3630 career hits. Ryan got revenge by fanning Rose in his next 3 at bats.

1914: Visiting Pirate Honus Wagner had 2,999 hits entering the game against the Phillies. The crowd cheered when he hit a ball past the shortstop in the 4th inning, but the official scorer ruled it an error. Wagner officially got his 3,000th in the 9th inning with a double to left field.

1977: After the first three Phillies reach base to start the game, Greg Luzinski hit one out for a grand slam to help the Phillies beat Atlanta 13-10. On base were Larry Bowa, Rich Hebner, and Mike Schmidt. Luzinski hit a 3-run double later in the game, putting him one short of the team record for RBI in a game.

1983: Steve Carlton strike out 9 in a 9-7 win over Pittsburgh, bringing his season total to 101. It was his 17th season with more than 100 strikeouts, tying Warren Spahn's National League record.

1985: Von Hayes became the 21st player in major league history to hit 2 homers in a single inning, when he connected twice in the 1st during a 26-7 pounding of the Mets. In all, the Phils collected 27 hits, including 10 doubles (3 by Bo Diaz). The runs, hits, and total bases (47) are all team records for the Phillies and records for the most given up by the Mets.

Recent milestones and those that may be reached over the next week or so.(For reference, Phillies' all-time top ten lists published last week: here)

Rollins is now four hits away from tying Mike Schmidt's franchise hits record, and needs five to pass him. With six games in the homestand, he has a good chance to set a new franchise record before the Phillies leave to go on the road again. 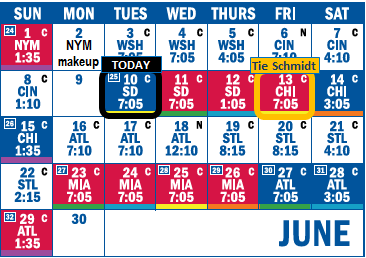