Rollins will hopefully get the hits he needs this weekend, before the Phils go on the road. 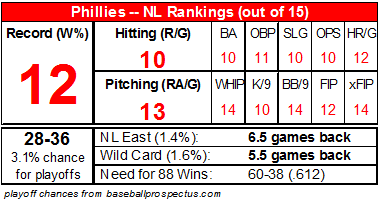 Tonight they try to win four in a row for the first time in over a year, since they won five straight on June 2nd through the 6th of last year.

CubsChicago's run differential is only -15 (compared to the Phillies' -40), but the Cubs have played further below their pythagorean expectation than any team in the NL. They've won four fewer games than their run differential would suggest, partly because they are 5-11 in one-runs games (the Phils are 11-11). Not that any a single series is predictable anyway, but the Cubbies may not be quite the patsies they appear to be at first glance. 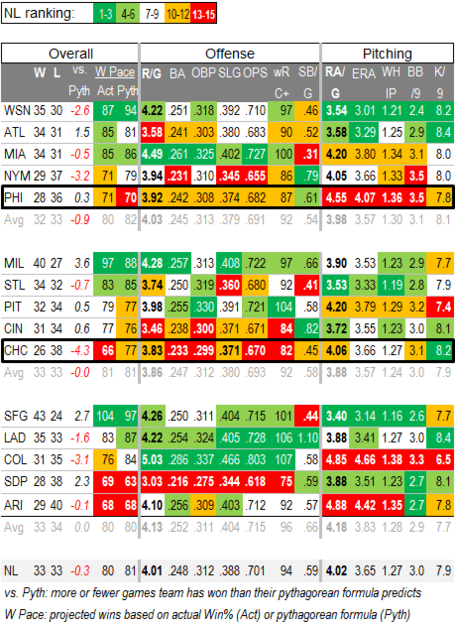 PhilliesAfter failing to lead the league in SB success rate last year for the first time in seven seasons, the Phils are back near the top again so far this year. Washington at 83% is the only team in the NL with a better SB%.

CubsChicago appears to be fairly patient at the plate, tied with the Phils for 2nd most pitches per plate appearance, but there's not much else that they're good at.

They are especially bad at stealing, with by far the worst success rate in the NL (57%). 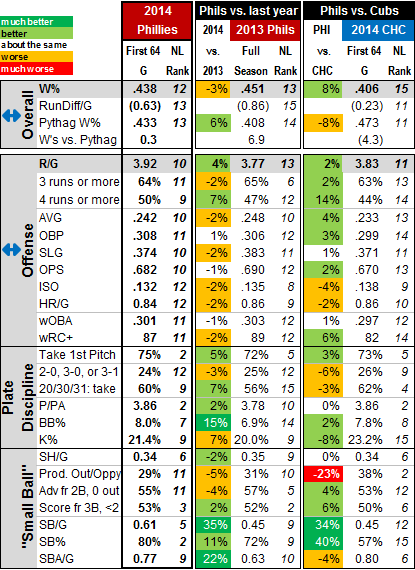 CubsIf the Cubs have a strength it's their pitching, where they rank average or better. Their starters in particular are second in the NL in FIP so far.

The Phils will face righties Jake Arrieta and Edwin Jackson today and tomorrow, and lefty Travis Wood on Sunday. 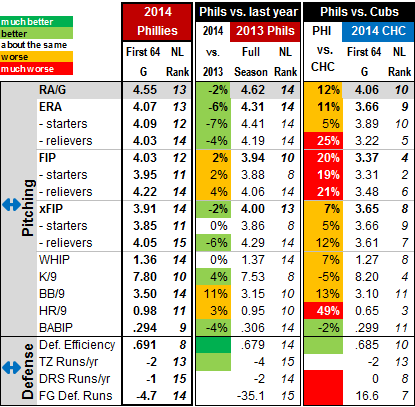 Reid Brignac is furthest over his 2011-13 OPS, John Mayberry the furthest over his average 2014 projection, and Mayberry and Utley are beating the average OPS at their respective positions (LF for JMJ) by the largest percentages: 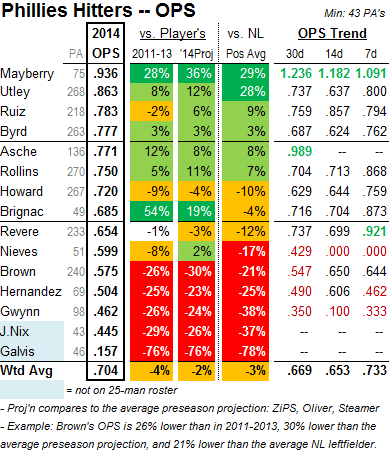 1945: The Phils lose the first game of a double-header against Boston, their 16th in a row, which would have set a new team record. However, when a suspended game from earlier in the month is completed in July, the Phillies win, nullifying the record loss streak after the fact.

1939: Grover Cleveland Alexander attends the opening of the Baseball Hall of Fame in Cooperstown, NY, along with Connie Mack, Babe Ruth, Cy Young, and other initial inductees. The ceremony was timed to commemorate the 100th anniversary of baseball's origin.

1959: San Francisco's Mike McCormick in 1959 throws a 5-inning no-hitter against the Phils. Richie Ashburn gets a hit in the 6th inning, but the game is halted by rain and the hit doesn't count.

1987: Right fielder Glenn Wilson throws out Montreal pitcher Bryn Smith at first after an apparent single. It was the second time in a year he accomplished the feat.

2008: Brad Lidge became the first Phillie to start a season with 18 consecutive saves when he closed out a 3-0 victory over Florida.

Also: Catcher Red Dooin and second baseman Otto Knabe played together on the early 1900s Phillies teams. They also shared the birthday on June 13 -- Dooin in 1879, and Knabe in 1884.

1890: Owner Al Reach takes over a manager in place of the temporarily blinded Harry Wright. He leads the team to a 4-7 record before yielding to Bob Allen

2009: The MLB Network show "The Pen," which follows the exploits of the Phillies' bullpen, debuts

Rollins' next hit ties the Phillies all-time franchise record. Hopefully he will tie it and break it during this series, before the team goes on the road starting Monday. 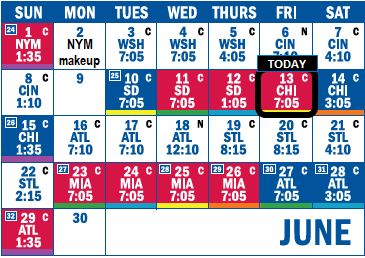