The Braves have scored exactly as many runs as they've allowed this season, but still manage to lead the NL East. The East, meanwhile, has the best run differential of any division in the NL, by a narrow margin. 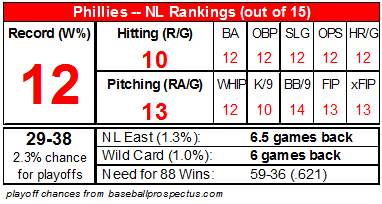 The Braves have a Run Differential of exactly Zero, but have two more wins than the .500 record that would project to. While they are holding on to 1-game lead in the division, the Nationals have been the better team even without Bryce Harper, who will start rehabbing this week. 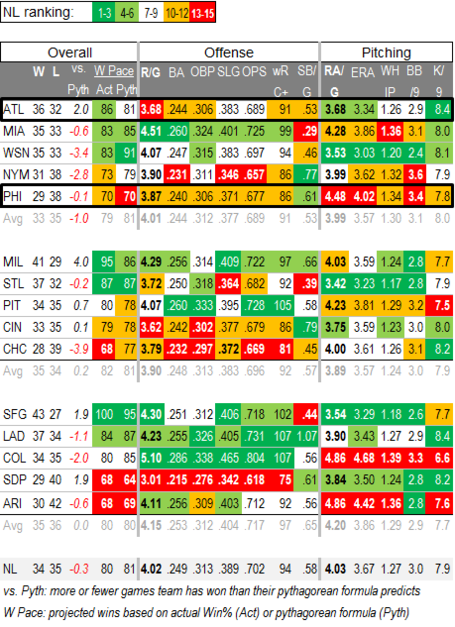 Phillies Team Stats vs. 2013 and vs. the Braves

Braves
Atlanta may have run into some bad luck with sequencing, as they rank around the middle of the pack in most offensive categories, including wOBA (9th), but are only 13th in scoring.

They lead the league in swinging at the first pitch, and are near the bottom in pitches per PA, and yet still have the second highest strikeout rate.

Jason Heyward leads the Braves in fWAR, but he's doing it primarily with the glove, hitting around league average at .255/.336/.386 (104 wRC+), but leading all NL players (at any position) in defensive runs above average. The Braves also have the #2 defensive player in the NL in Andrelton Simmons. 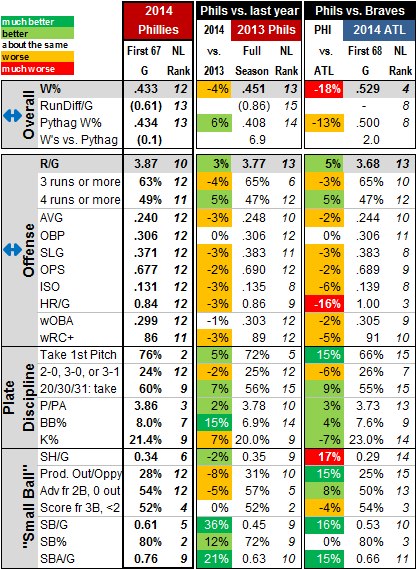 BravesAtlanta has one of the better staffs in the league, with a bullpen that leads the NL in both FIP and xFIP, to go with a starting rotation that is above average.

The Phils will face all righties in this series: 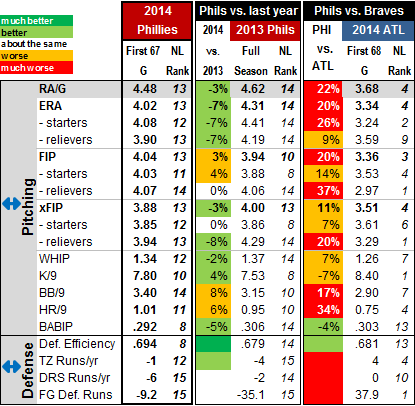 Although the Phils took four out of six on the homestand, and there were the occasional bright spots, most of the starting lineup had a rough week: 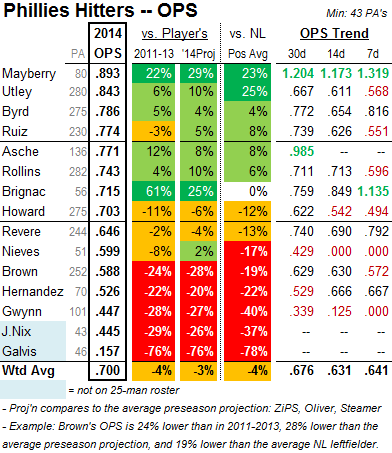 1991: Pitching the fourth inning against Cincinnati, Andy Ashby struck out the side on just nine pitches. It was only the 12th time in National League history that it had been accomplished, and the first time by a Phillies pitcher.

2010: Pitching in new Yankee Stadium, Jamie Moyer gives up a home run to Robinson Cano in the second inning. It's the 42nd major league ballpark in which Moyer gave up a home run, setting a new record.Moyer got the win in the Phils' 8-3 victory.

1949: Eddie Waitkus is shot in a Chicago hotel by 19-year old Ruth Steihagen. She is sent to a mental institution, and Waitkus will return to the majors the following year.

1952: In the second game of a double-header in Pittsburgh, Granny Hamner was on third with one out when Smoky Burgess hit a pop foul in front of the Phillies dugout. The ball was fielded by Pittsburgh's catcher, but no one covered home, so Hamner scored, giving Burgess an RBI. The Phils won 6-3.

1962: Signed minor-league free agent Ferguson Jenkins [Jenkins would be traded to the Cubs in April 1966]

1968: After guiding the team through more than 1300 games, manager Gene Mauch is fired over escalating disagreements with Dick Allen. Bob Skinner is named as his replacement. Mauch's career record was 645-684-2. Skinner had been managing AAA San Diego.

1930: Chuck Klein gets a hit in his 26th straight game, setting a modern team record. He had gone 0-for-3 before knocking a single in the 8th inning against Pittsburgh.

1988: With the bases loaded and one out against New York, Steve Jeltz hits what looks like an inning-ending double play. Milt Thompson alertly holds up going into second, getting into a rundown that allows two runners to score before he's retired. Jeltz is credited with 2 RBI on the double-play.

2012: Playing in Toronto, Jim Thome leads off the second inning with a home run, his 100th as a Phillie. Thome became the 4th player in major league history with at least 100 home runs for three different teams, following Reggie Jackson, Darrell Evans, and Alex Rodriguez.

If Rollins winds up being traded at the deadline, it will be the third time since Ed Delahanty set the record in 1901 that a Phillie got just enough hits to set a new team record before retiring or being traded: