The Phils have won 7 of 9 to pull ahead of the last-place Mets, and try to keep rolling in St. Louis, where they'll meet a Cardinals teams that has won 8 of their last 10. 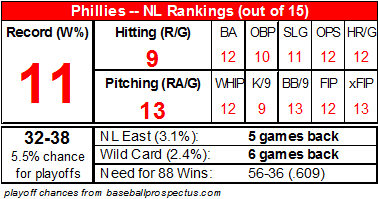 Cardinals
As recently as June 6th, the Cards were sitting at 31-31, but have since won 8 of 10, including a 5-game winning streak that was snapped by the Mets and Bartolo Colon yesterday.

They are now 3 1/2 games behind Milwaukee, but would get one of the two wildcard spots if the season ended today, along with LA: 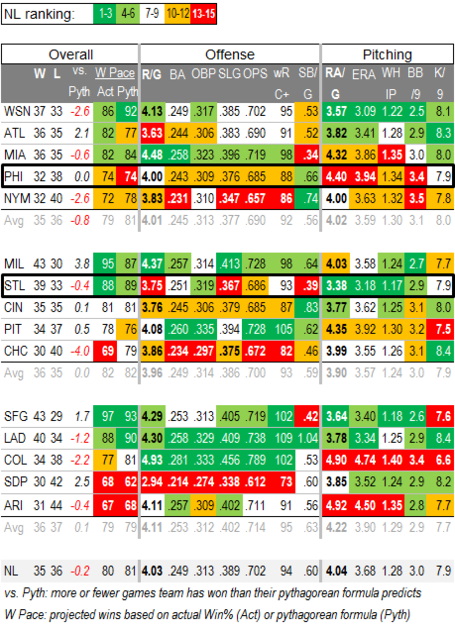 Phillies Team Stats vs. 2013 and vs. the Cardinals

Cardinals
The Cards have less power than the Phillies, but get on base at a somewhat better rate, .319 to .309.

Overall however the two offenses are fairly similar: while St. Louis has the slightly better wOBA (and better wRC+, accounting for its home park), they are also 3rd from the bottom in the NL in runs scored per game. 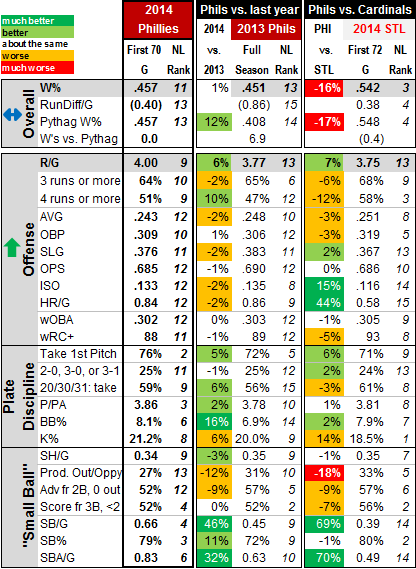 St. Louis has one of the best staffs in the league, which, combined with their excellent fielding, means they're allowing the fewest runs in the NL. xFIP doesn't like them as much because much of their success comes from suppressing home runs, and their 7.1% HR/FB rate is the lowest in the league. However while there may be some luck to that, their rate has tended to be on the low side the last few years (it was 2nd lowest last year, at 8.5%).

The Phils will start the series against the back end of the Cards' rotation, before it gets even tougher over the weekend: 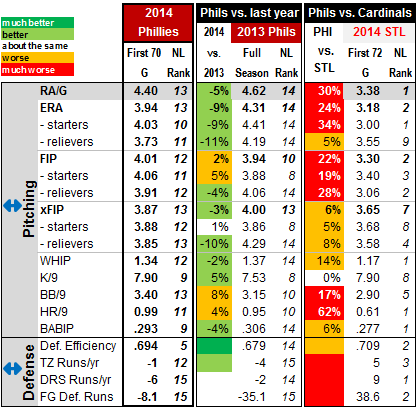 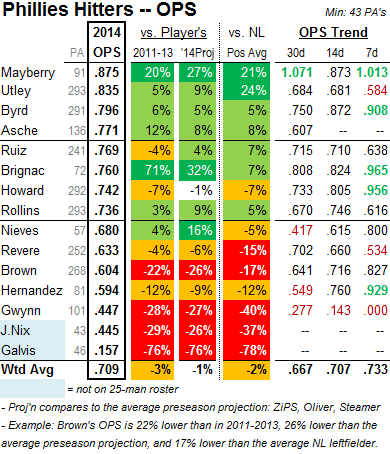 Dom Brown has pulled his OPS over .600 for the first time since May 5th. Utley continues sliding, and the bench has looked better lately thanks to Brignac and Mayberry:

1927: Phillies pitcher Jack Scott pitches both games of a double-header in Cincinnati and goes the distance in both. He beat the Reds 3-1 in the first game, but lost 3-0 in the nightcap. No pitcher has recorded two complete games in the majors in a single day since.

1970: In the only face off between Hall-of-Famers Jim Bunning and Tom Seaver, Seaver earns the win while fanning 11 and Bunning retires only two batters while allowing 7 runs.

1971: Larry Bowa was credited with 2 stolen bases on a single play. Playing the Mets in the top of the 14th, Bowa and Oscar Gamble attempt a double steal. Bowa makes it to third, while Gamble is caught in a rundown. Bowa then advances home, scoring and drawing a throw that allows Gamble to reach second safely.

2000: Randy Wolf allows a solo home run to Quilvio Veras, the last in a team-record 12 straight starts in which he yielded a long ball.

1927: In a game at Wrigley Field, Phillies Jimmie Wilson and Fresco Thompson steal home in the same inning (the 8th). Both steals came on the front end of double-steals. The Phillies scored six runs in the inning, earning a 7-2 victory.

1982: Catcher Bo Diaz steals home on the back end of a double-steal, as the Phillies beat Pittsburgh, 8-3.

1987: Before a game in Chicago, the Phillies fired manager John Felske and replaced him with coach Lee Elia, a former Cubs skipper and Philadelphia native. Felske had a 190-194 record over three seasons leading the Phils.

1989: Traded Steve Bedrosian and a player to be named to San Francisco for Terry Mulholland, Dennis Cook and Charlie Hayes

1989: Traded Juan Samuel to New York (NL) for Lenny Dykstra, Roger McDowell, and a player to be named

1967: Larry Jackson throws a 1-hit victory over the Mets. It's his 18th straight win over New York, a streak that dates to the first game the Mets ever played. The only hit he gave up was a double by Tommy Davis in the second.

1997: Bill Giles announces his resignation as team president and elevates his protege David Montgomery to the post. Giles becomes the team's chairman.

And for all the Paul Bako fans, the Phillies signed him to a minor league deal 5 years ago yesterday (6/18/09), and he turns 42 tomorrow.

Milestones by Phillies players that may be reached over the next week...