Phillies Milestones: Update at the 1/3 Mark

Updates of the Phillies' all-time top ten lists, and where current Phillies might finish on those lists by the end of the year.

Share All sharing options for: Phillies Milestones: Update at the 1/3 Mark

Time for a break from the current lackluster series and the progressively more depressing standings.

While we track movements on the Phillies' career lists, it can be hard to see the forest for the trees. Below are the Phillies' all-time top 10 lists as they stand as of now, with current Phillies highlighted.

The arrows indicate the movement they are projected to make up a list this year (or movement down in a couple of cases) -- e.g. Jimmy Rollins started 2014 in fourth place in hits, and is expected to to finish the year in first. Rollins, Utley, Howard, Hamels, and Lee are color coded.

The lists as they stood at the beginning of the year (through April 6th) are here (along with rough timelines of when players would move up each list), and a Rollins-specific milestones post is here. 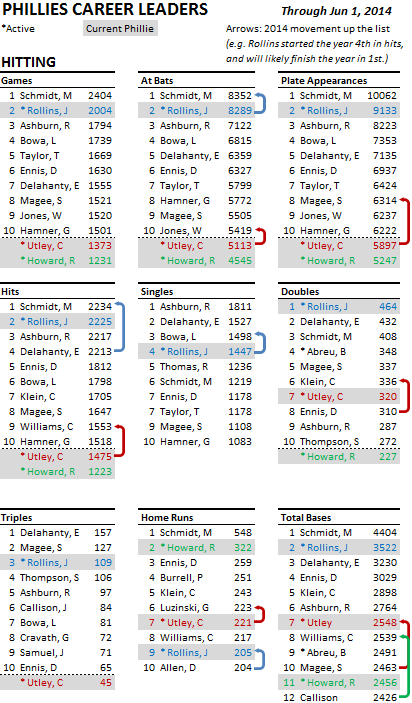 Rollins: soon after he passes Mike Schmidt in hits, he will likely also become the franchise all-time leader in At Bats. Rollins will not catch Schmidt in either Games played or Plate Appearances before his current (should that be emphasized?) contract expires.

Utley: will move into the top 10 in Hits, At Bats, and Plate Appearances later this year.

By the end of the season, Rollins, Utley, and Howard will likely be 3 of the top 8 in Phillies history in both Total Bases and RBIs, and 3 of the top 9 in Home Runs. 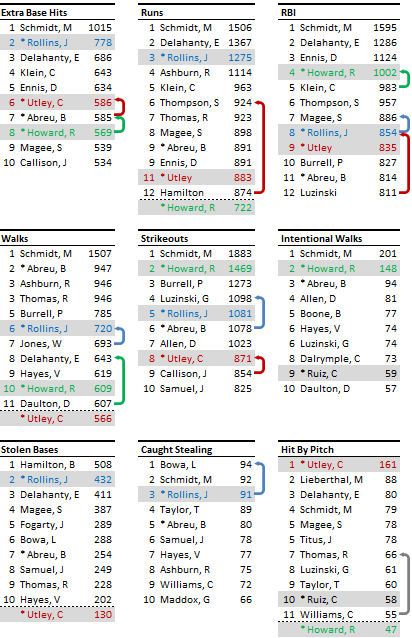 Utley: will move past a couple of tightly bunched groups this year, to go from 12th to 6th in Runs scored, and from 12th to 8th in RBIs.

Ruiz: Chooch could be as high as 7th in HBPs in franchise history by the end of 2014. 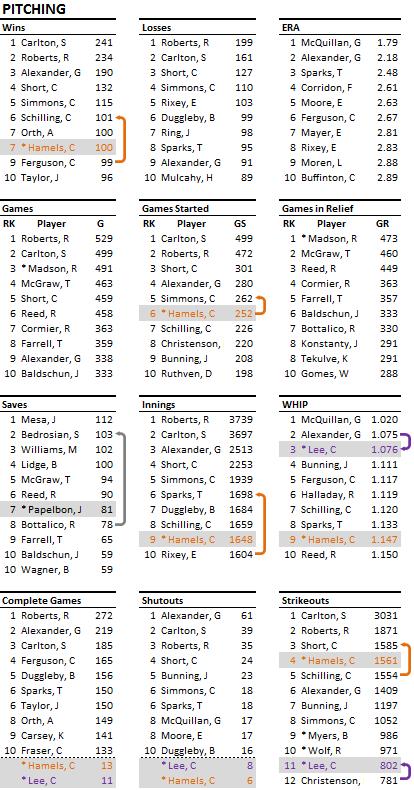 Hamels: I still think of Hamels as being relatively young, so it's kind hard to believe that in about a month, there will be only five pitchers in history who threw more innings for the Phillies. And only two who struck out more batters.