The East has had only one very good team so far (by run differential), but overall it's right in the middle between the Central and the West. Utley ties Luzinski on the Phillies' home run list, and Rollins is about to play his 2000th game at short. 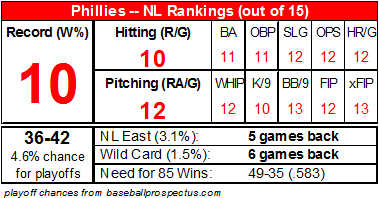 It will take much more than 85 wins for the NL wildcard, so that's not going to happen, but 85 wins could conceivably be enough to win the NL East this season.

The Phils have to play .583 ball (a 94-win pace) the rest of the way to get to 85 wins. They've made a small start to that by winning 12 of their last 20, now all they have to do is keep it going for the next 84. Piece of cake. (And of course that assumes that none of the other NL East teams get their act together enough to win more than 85 games).

Phillies
The Phils have won 11 of their last 17 to stay within 5 of NL East-leading Washington. The come into this four game series four behind the Braves.

Braves
Atlanta is hanging on to second place, but they have a negative run differential so far this season, thanks to a below average offense. 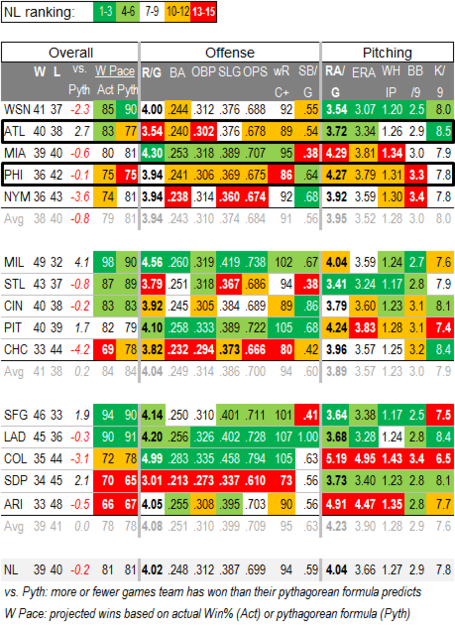 The pythagorean projection of the NL East Leader is about 90 wins for the full season, essentially the same as that of the leaders of the West and Central. If there is any weakness in the East, it's in the #2 team. But, at least relative to the West, that's more than made up for by the East's bottom teams not being as bad as the Diamondbacks and the Padres. With unbalanced schedules, the best of the West will get to feast on poor teams far more often than will the other divisions. 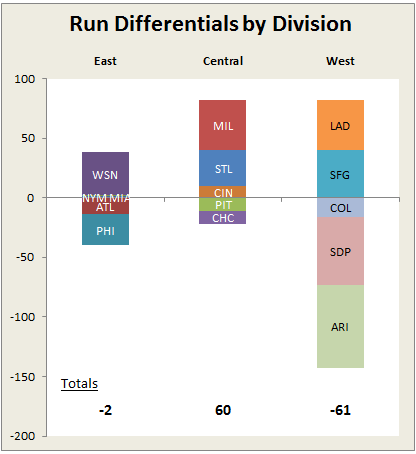 Phillies Team Stats vs. 2013 and vs. the Braves

Phillies
Their walk rate has dropped below 8%, but they still rank 6th in the NL, and above the league average of 7.7%.

Isolated power is down to .128, the lowest it's been since mid-May.

Braves
Power, and specifically home runs, is about the only thing the Braves are good at at the plate. Also, they don't steal often, but at least they don't get caught very much, either. 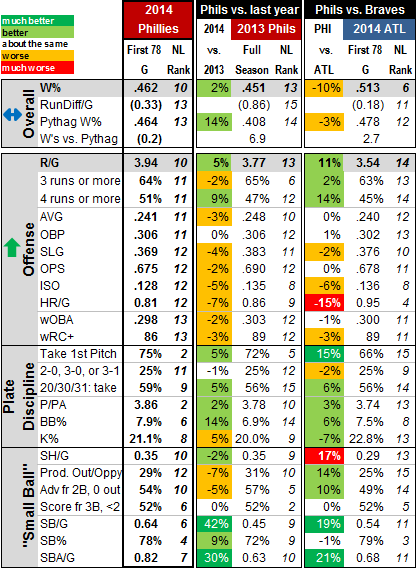 No Hamels, no Burnett, and obviously no Lee. 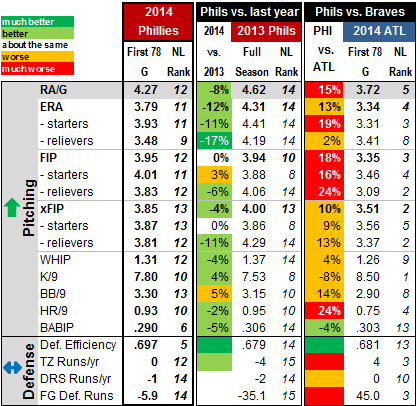 Marlon Byrd was very close to catching Utley in OPS coming into Thursday's game, trailing by less than ten points, .803 to .794. However Utley's 3-hit game including the home run has created some space again: 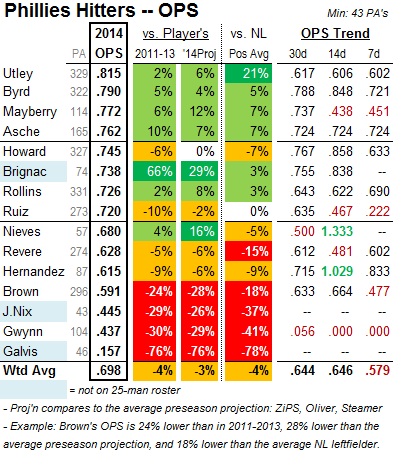 The spaghetti strands are starting to separate: Burnett's up and down season has been up lately (i.e. ERA going down). Hernandez and Kendrick are in the 4-5 range that we may have expected. And of course the bullpen's performance has caused their ERA to steadily decline since late May. 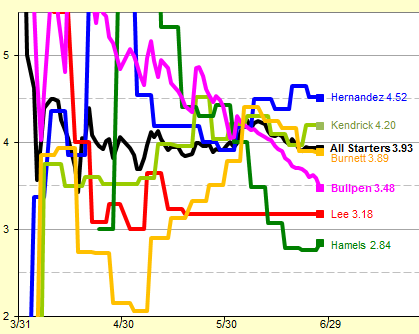 1941: Visiting New York, the Phillies participate in the first Ladies Night game, losing to the hosts 7-4

1952: Manager Eddie Sawyer is fired and replaced the next day by Steve O'Neill, who had managed three other major-league clubs. Sawyer was invited to remain with the club as a scout.

1963: Johnny Callison hits for the cycle as the Phils beat Pittsburgh 13-4. In the same game, center fielder Tony Gonzalez made an error in the 7th inning, ending a major league record streak of 205 errorless games by an outfielder

1980: Steve Carlton fans the Mets' Elliott Maddox in the fifth inning, his 1,872nd strike out as a Phillie, establishing a new team record. He also gets the win in a a 3-2 victory. [Note: Cole Hamels currently has 1,600 after last night]

2003: Brandon Duckworth was hit by a batted ball in the first inning and left the game, but the bullpen held Baltimore scoreless for 15 innings. A 3-run homer by Jason Michaels in the 17th gave the Phils the win, tying the record for longest interleague contest.

2007: Ryan Howard hit a 505-foot home run, setting records for the longest blast at Citizens Bank Park and the fastest player to 100 home runs (it took him 325 games). The Phillies lost to the Reds 9-6.

2010: Jamie Moyer was the victor as the Phils beat Toronto 11-2. Toronto's runs came on a home run by Vernon Wells, the 506th career round-tripper given up by Moyer, making him the all-time leader in that category.(The record was previously held by Robin Roberts.) He also reached 4,000 career innings pitched, only the 40th pitcher to do so. [all-time leaders in HRs allowed]