Is the East the Beast the of the NL? Rollins is 9 hits away from tying Mike Schmidt, and Papelbon needs 1 save for 300. 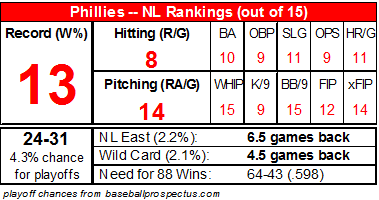 The Phillies' already low playoff chances took a severe hit in losing 4 of 5 to the Mets.

The East is arguably the best division in the National League. No, the division doesn't have a dominant team, but their combined record rivals that of the West, and is much better than the Central.

In addition, the East's pythagorean projection, based on its run differential, is narrowly the best of the three divisions: 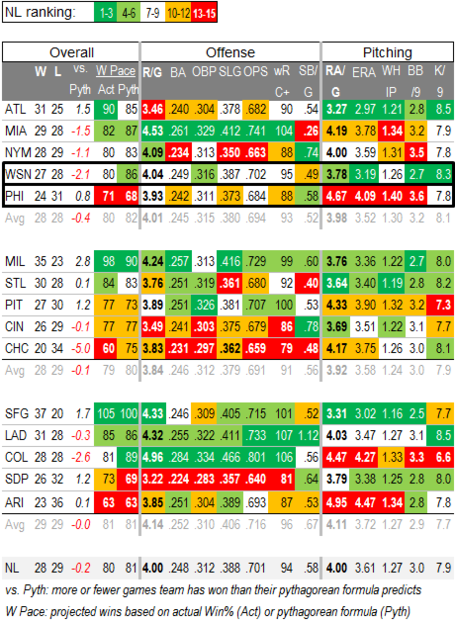 Phillies Team Stats vs. 2013 and vs. the Nationals

Phillies
For the first time this year, the Phillies are last in the NL in fWAR by position players, falling below the Padres and the Cubs thanks to a -0.6 WAR in the 5-game Mets series.

Home runs are finally coming: after ranking 14th in the NL in home runs per game over their first 39 games, the Phillies lead the NL in the 16 games since May 17th.

Their BB% is now up to 4th in the NL for the season to date.

Nationals
Washington has done slightly better than the Phillies at the plate, generally ranking slightly above average, whereas the Phils have been slightly below.

The Nats though have scored more than 3 runs even less often than the Phils (45% of the time), ranking 12th in the NL.

The Nationals have 2 fewer wins than their run differential and pythagorean projection indicate they should have. 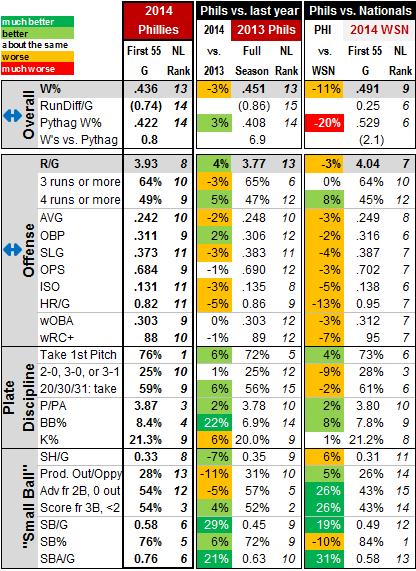 Phillies
The woeful Diamondbacks (4.95 per game) are the only thing keeping the Phils from allowing the most runs in the NL.

The bullpen ranks 14th in ERA, and that's their highlight, ranking 15th in both FIP and xFIP.

Nationals
The Nationals' defense is below average, but it's pitching where they win games, ranking near the top in both ERA and FIP.

The Phils will be facing: 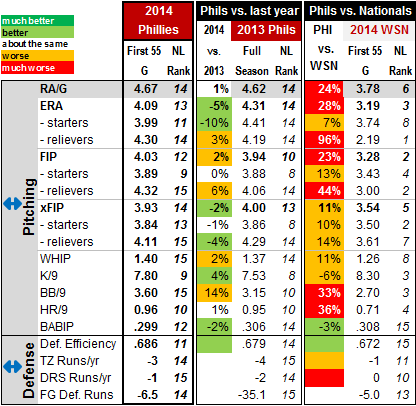 Chooch is the only Phillies regular doing much in recent weeks. Howard's occasional home run has been nice, but overall he hasn't been doing much either, with OPS's in the .600s over the last 30, 14, and 7 days: 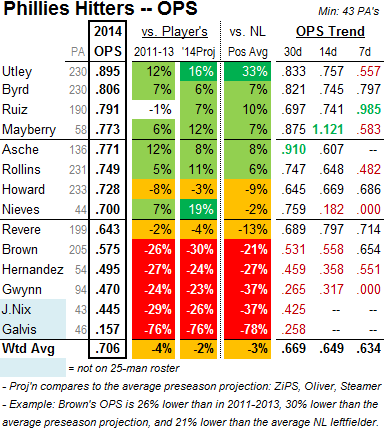 What to make of the spaghetti strands below? 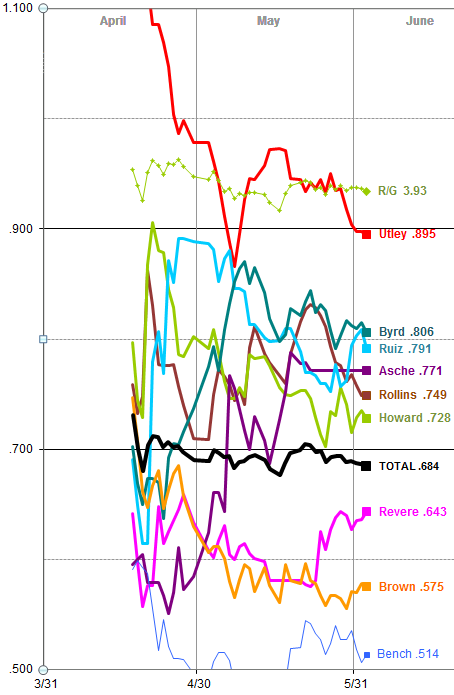 1930: Pitcher Grover Cleveland Alexander is released after failing to pick up a win in 3 starts. His 373 wins tied him with Christy Matthewson for most wins in NL history.

1972: GM John Quinn's retirement is announced during the 9th inning of a Phillies-reds game. Paul Owens, the team's farm director, was named to take his place.

1949: The Phils hit 5 homers in one inning (the eighth) against the Reds. Catcher Andy Seminick hit two of them, as well as one earlier in the game. Del Ennis, Schoolboy Rowe, and Willie Jones hit the others. The 5 home runs tied a major-league record for a single inning, and the 26 total bases recorded in the inning set a modern record.

2002: Robert Person hits two home runs and earned the win in an 18-3 victory over Montreal

And Antonio Bastardo made his major league debut on June 2, 2009.

1897: Leading 4-0 in the 4th, the visiting Pittsburgh players began throwing the ball around the field to delay the game and force a rain out. The visitors were upset over an earlier call on a foul ball and the resulting ejection of the their team captain. The umpire called the game, but awarded the Phillies the win.

1951: Pirate Gus Bell hits for the cycle off of Milo Candini in a 12-4 win over the Phillies at Shibe Park. His grandson, David, will hit one for the Phillies in 2004.

1953: Curt Simmons cuts off part of his left big toe while mowing his lawn. He doesn't pitch again for a month, but wins 16 games in the season

1964: Sandy Koufax of the Dodgers threw his 3rd career no-hitter, striking out 12 Phillies in a 3-0 victory at Connie Mack Stadium. He walked Dick Allen in the 4th inning, but Allen was caught stealing so Koufax faced the minimum 27 batters.

2013: John Mayberry Jr. became the first Phillie to collect two extra-inning home runs in the same game. He tied the game with a 10th inning solo shot, then won it with a walk-off grand slam in the 11th for a 7-3 win over Miami.

Recent milestones and those that may be reached over the next week or so.
(For reference, see the Phillies' all-time top ten lists published yesterday, here.)

Rollins is now 9 hits away from tying Mike Schmidt's franchise hits record, and he should reach it next week, during the upcoming homestand. There is not a lot of slack in the schedule for him to pass Schmidt at home. 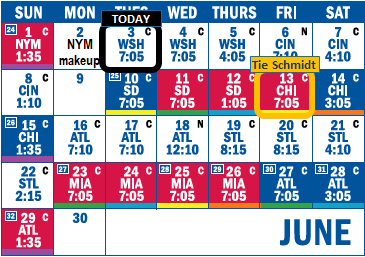