The Phils have lost 20 of their last 29, and look to stop the freefall against the up-and-down Reds. Jimmy Rollins is now only 7 hits from tying Mike Schmidt's franchise hits record, while Cole Hamels has to beat the tough Johnny Cueto if he is to get his 101st career win and tie Curt Schilling for 6th in Phillies history. 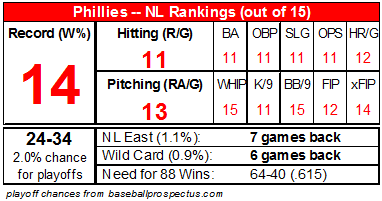 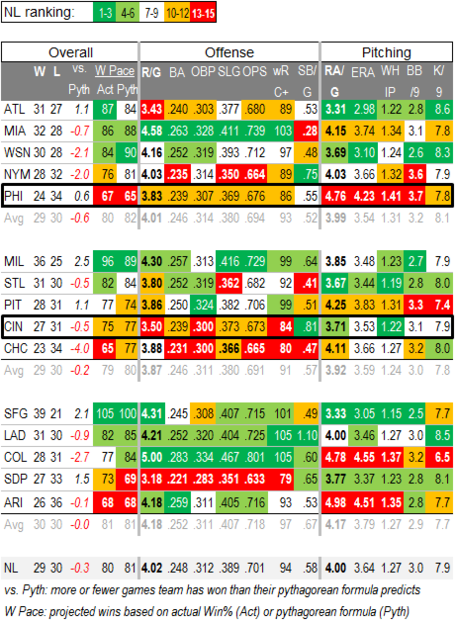 Phillies The Phils are last in the NL in fWAR by position players, and both hitting and fielding are contributing:

Reds Cincinnati is 8th in fWAR, thanks to a defense that is arguably the best in the NL, and which makes up for their near-worst hitting.

The Phillies and Reds have about the same Runs vs. average from their offense (Reds -40, Phils -39). However the Reds make up most of that shortfall with 37 runs above average from their defense, while the Phillies' defense puts them an additional 7 runs below average. 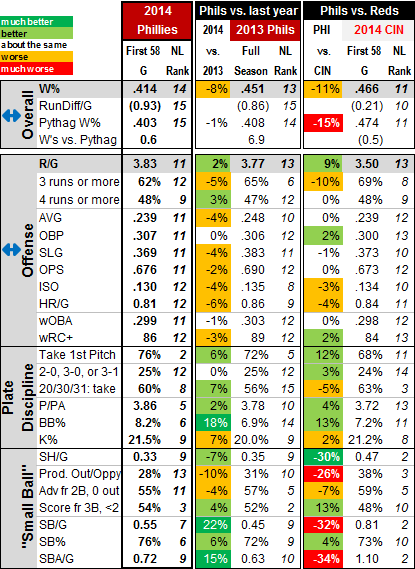 Phillies
The Phils have gotten 3.0 fWAR from their pitching (11th in the NL), and almost all of that from the starters, as the Total row below shows. The starting rotation has had its ups and downs (and more recently, primarily downs) but have generally been about average overall, the bullpen has gone from the worst in the league in April, to one of the best (by fWAR, an admittedly crude measure for relievers) in May.

Over their last 13 games, the starters have had a 5.24 ERA, and have produced only 3 quality starts. They've only had 1 quality start in the last week (Cole Hamels' start on Sunday).

Reds pitching has been somewhat below average overall, but their excellent fielding has pushed their ERA to 8th in the NL, and with very few unearned runs allowed, they've allowed the 5th fewest runs in the league.

For the weekend series, the Phils will be facing: 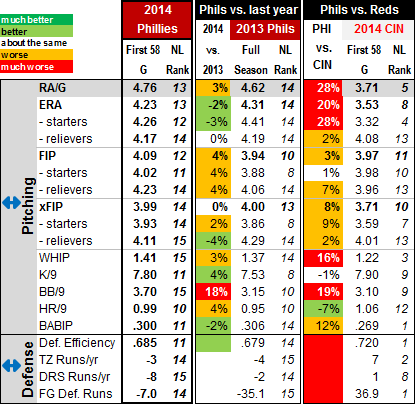 It's tough to decide what's more amazing: that Dom Brown has a .567 OPS in early June, or that there have been four players with substantial playing time who are even worse. Brown's modest 6-game hitting streak (totaling 6 hits) came to an end last night.

Marlon Byrd, Jimmy Rollins, and Ryan Howard have also been ice cold, with Carlos Ruiz the only regular showing any signs of life.

His almost respectable .627 OPS this year? Driven by a 31.6% line drive rate and .421 BABIP. With career rates of 21.6% and .290, respectively, the Phillies have been lucky to get as much as they have so far, because it's bound to regress soon. 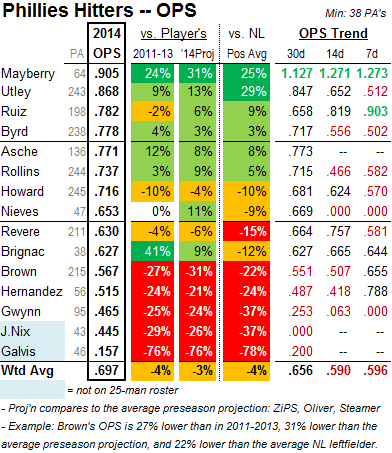 1962: The Phillies win both ends of a double-header to finish a sweep of the Mets, handing them their 17th straight loss, a major-league record.

1965: Johnny Callison hit 3 homers in a game for the second time in his career, leading the Phillies to a 10-9 win over Chicago

1972: In the midst of a streak of 18 losses in 19 games, the Phillies tried to change their luck with "Turn it Around Day." The lineup was announced in reverse order, last names first. The seventh inning strech took place in the third inning. The scoreboard welcomed groups not in attendance. Ushers wore their hats backwards with their nametags on their backs. It didn't help, as the team dropped a 4-3 decision to Houston.

1990: Von Hayes ties a team and National League record with 5 walks in a game against St. Louis

1915: Grover Cleveland Alexander threw a one-hitter in a 3-0 victory against St. Louis. Artie Butler's bloop single with two out in the ninth inning was his team's only hit.

1948: Richie Ashburn ties a rookie record by getting a hit in his 23rd consecutive game to help the Phils beat Chicago 6-5.

1979: Steve Carlton beat the Astros 8-0 with a 1-hitter at the Astrodome. Jeff Leonard had the only hit with a single to lead off the 7th.

1950: Richie Ashburn starts the game in center field -- the first game of a streak that lasted 730 games, fifth longest in National League history. The streak ended when a spring training injury prevented him from starting the 1955 season.

1983: Steve Carlton passes Nolan Ryan to take the all-time strikeout lead, fanning six for a career total of 3,526. The two will trade the lead for the next year, until Ryan takes it for good in September 1984.

Recent milestones and those that may be reached over the next week or so. (For reference, Phillies' all-time top ten lists published on Monday: here)

Rollins is now 7 hits away from tying Mike Schmidt's franchise hits record, and he should reach it next week, during the upcoming homestand. There is not a lot of slack in the schedule for him to pass Schmidt at home. 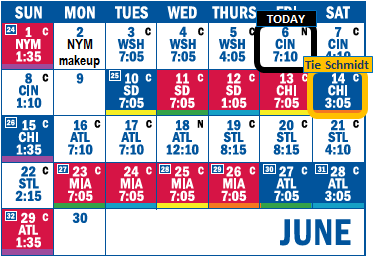 ​Kid Elberfeld, called "the dirtiest, scrappiest, most pestiferous, most rantankerous [sic], most rambunctious ball player that ever stood on spikes"