Share All sharing options for: Cans of Cornrows: Phillies 6, Nationals 2

It's one of the odder metaphors of baseball, the "Can of Corn." After all, it takes hard work, time, and some luck to ripen and harvest that stuff, cut it from the cob, pack it in jars, and of course it works best under pressure! With heat! So why is it thought of as being so easy? And why is Jimmy Rollins derided for hitting so many of them throughout his career?

But hit them the does, and when he's going well, as he is again in 2014, it's a joy to climb on his back and style his red-light-loving, leadership hair in ways that threaten the security of white people everywhere. Rollins hit two home runs, his 10th and 11th of the season, a marked improvement from last year, when he hit six all year. Also:

It's time to flip the script on the can of corn, and maybe on the suddenly re-surging Phillies, who beat the Nationals, 6-2, in the first game of their pre-mid-season-break of this divisional series. The Phillies now have won 5 in a row, have averaged 6 runs per game in that stretch, and, dare I say it, have looked... what's that word again? Good! Good! The Phillies have looked good. It fits like a hand-me-over shirt a bit, but it fits. So smile. 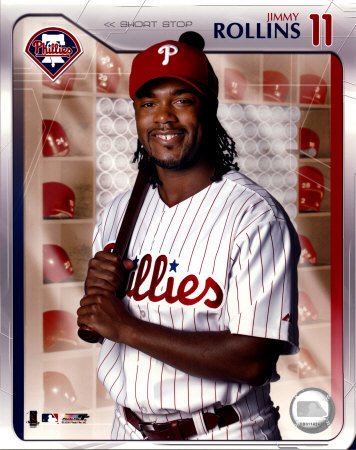 By contrast, I still can’t seem to get worked up all that much about the Nationals. Despite their talent, they still exude the dull empty-stadium vuvuzela spirit of all the Expos’ yesteryears. These days, about all that I can muster is a vaguely pathetic longing for Jayson Werth, and wonder, in a genuine way, how anyone can play baseball in hot weather with that much hair routinely, and well. Here is the sound of my soul watching Werth play for the Nationals:

Anyways, here's what else happened in the game.

First, Grady Sizemore started in centerfield and led for the Phillies in the place of Ben Revere, who reportedly has been bothered by a sore foot. If you've missed this development, allow commenter ChicagoPhanatic to sum up what's going on here:

To make room for Sizemore, the Phillies optioned Buchanan back to the IronPigs. For those of you who had to look up the rule like I did, I’ll save you the trouble. Buchanan can’t come back to the majors for 10 days unless someone goes on the DL. With the ASB this week, he won’t be needed for 10 days, and presumably that gives him a chance to start in AAA and keep fresh. Likely even more to the objective, the Phillies can play Sizemore until then to see if they like him or not before making a decision. Bottom line is the roster move to bring up Sizemore is temporary and within 10 days the Phillies have to make a decision to move someone else to bring Buchanan back up. Presumably if they like Sizemore they will DFA Gwynn. If they don’t they’ll DFA Sizemore. If they haven’t decided yet, I guess they could option Hernandez while they decide.

Ominously, I should hasten to add that he is wearing number 24, last seen on the backs of fellow reclamation projects Ty Wigginton and Brandon Moss, so please don't expect much, or for this to end well. Got all that? Then let's move on. Tonight's game also featured the Nationals' Jordan Zimmerman against A.J. Burnett. The Phillies smacked Zimmerman's pitches around a bit in the second, as consecutive singles by Marlon Byrd and Cody Asche preceded an outfielder-splitting, bases-clearing double by Dom Brown. Then, in the third, Sizemore made everything worthwhile, getting his speedy leadoff self on base before Jimmy Rollins smacked high inside pitch for a two-run home run that landed three cornrows over the fence down the right field line.

Just seeing if you're paying attention there. The main point is, it was 4-0 Phillies on a cloudy but otherwise soft, warm summer evening in South Philadelphia.

In the bottom of the fourth, Zimmerman was lifted for Craig Stammen after he developed a cramped bicep and fell victim to an epidemic of pre-break injuries among the Nationals. This one is doubly concerning for the Nationals, as Zimmerman was picked for the All-Star Game. But that's their problem. I cares not.

A word about Marlon Byrd. One of the potential side plays with the Sizemore callup is that the Phillies can use the time to actively shop Byrd. After his double in the sixth, which was followed by a walk to Dom Brown, an RBI double by Cameron Rupp to left that ended with the Nats' Bryce Harper throwing out Dom Brown because of course Bryce Harper throwing and of course Dom Brown running and what the hell, Burnett was up next anyway, so behold:

After that double, Marlon Byrd now has 40 extra-base hits on the season.

For the right trade, of course, I won't mind his departure, but I don't have a high degree of confidence that it would be the right trade, and furthermore and even moreso: I can't wrap my head around the Outfield of Sucks that would remain in Philadelphia and convene around home plate with a "bat" for at least one-third of the remaining at bats of 70-some games. O ye gods.

Meanwhile, despite the odd runner or two prancing around into scoring position, Byrd's fellow trade bait partner Burnett threw six shutout innings before throwing a leadoff home run to the young, virile, and suddenly aroused Bryce Harper. Really looking forward to that walking boner pill for the next ten years plus, you guys. But whatever, this is 2014, he's not at Mike Piazza Level just yet, and what's more, Burnett maintained his Quality Start(TM) staff lead for the Phillies with a nice assortment of ground-ball inducing breaking pitches. He is a credit to mercenaries everywhere. Bravo.

Rollins hit his second home run in the seventh off Stammen to stretch the Phillies' lead to 6-1, so out Stammen went for Jerry Blevins, which is a great name for a pitcher if you also happen to teach music to middle schoolers. "Guys!" you'd say. "Did you know that Mr. Blevins used to pitch in the big leagues?"

"Shut up," your friends would explain helpfully. "He did not."

Things would escalate quickly, and your head would soon be encircled by swirling, cold, clear water. That's what you get for being Mr. Blevins' pet defender, and hanging out on sites like Baseball Reference when you should have been practicing the trombone anyway, sport.

In the Nationals' 8th, after Burnett walked Werth and Adam LaRoche and was lifted, three items of note, all involving reliever Ken Giles: 1) he allowed his first inherited runner to score when Ryan Zimmerman knocked in Werth; and 2) then retired Bryce Harper and his turgid staff of manhood on a 100mph fastball that Harper sent into the stratosphere before landing foul, 20 feet away, in Rupp's glove; and 3) he pitched the ninth inning as well.

Ken Giles is the 4th #Phillies pitcher ever with shutout appearances in at least 12 of his first 13 career games (requiring 13+ innings).

On to the hopeful conclusion: The Phillies have won five games in a row for the second time this season, are now eight games back in the division, have an outside chance to finish before the all-star break only six games out, and lots of other good N.L. teams have suffered really bad injuries this week.