Comparing stats at the mid-way point to 2013; Utley about to become 2nd highest behind only Mike Schmidt in rWAR among position players. 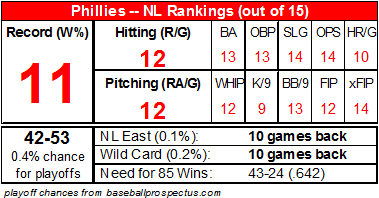 We're showing the playoff chances and 85-win target only to emphasize how unattainable they are (and that's probably been the case for a while now). 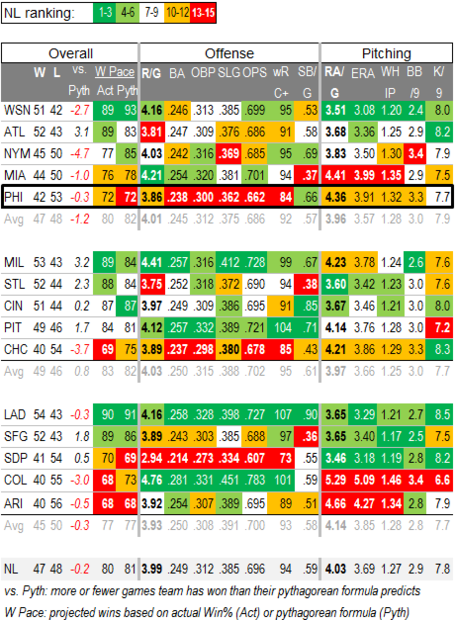 Ever since the Phils' first 5-game winning streak caught up with their 2012 record, they've been tracking close to that through both its ups and downs: 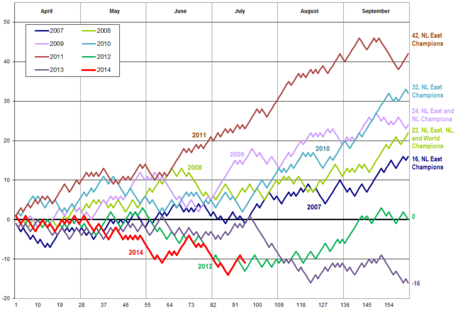 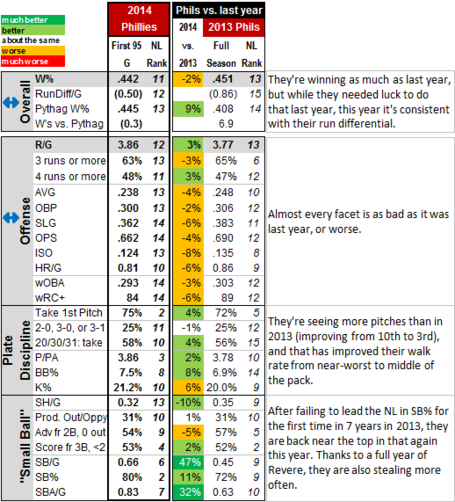 Their batting average with runners in scoring position recovered briefly in the Brewers series but has dipped again, and now sits at a lowly .229, 13th in the NL.

(dotted lines show the NL average for each) 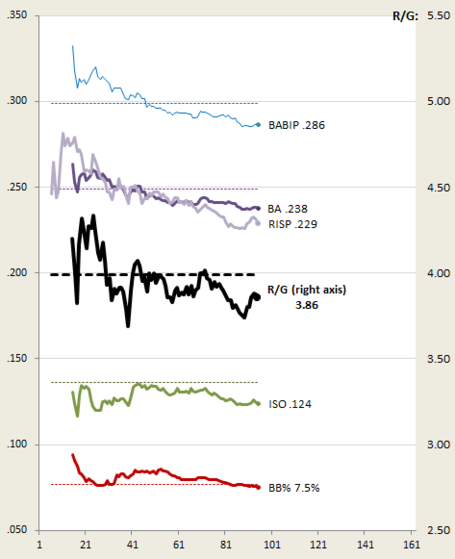 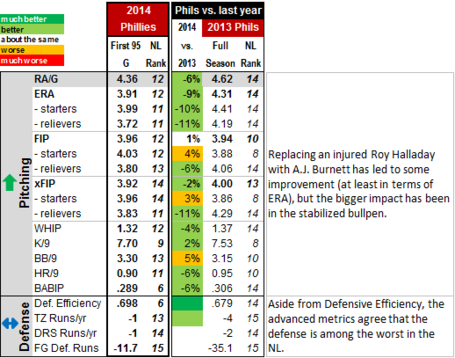 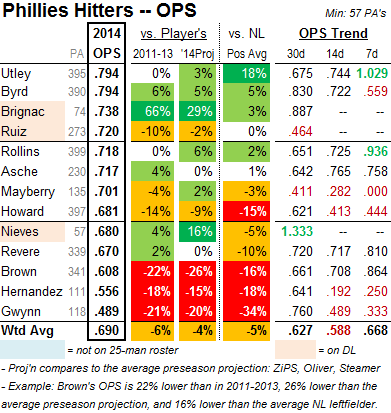 Howard has now left the bunch in the low .700s and is falling to join Revere... 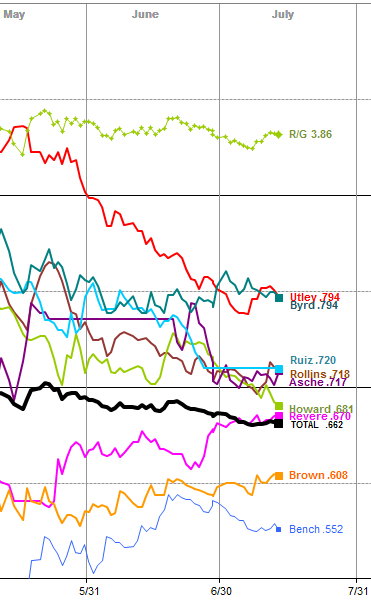 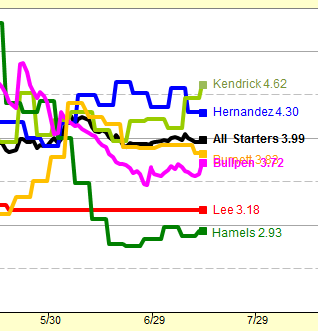 1979: Mike Schmidt hits his 31st home run of the year off of Don Sutton of the Dodgers, the first time a Phillie collects more than 30 before the All-Star break.

1980: Steve Carlton scores a Sports Illustrated cover appearance, the first of two for the Phillies that year (cover date 7/21)1988: Mike Schmidt passes Mickey Mantle on the all-time home run list with career bash number 537, giving him sole possession of 7th place.2006: The San Francisco Giants start an outfield of three players over 40 -- the first in major-league history. 41-year-old Barry Bonds and Steve Finley and 40-year-old Moises Alou led the Giants to a 5-3 win over the Phillies.2006: At Triple-A Scranton/Wilkes Barre, Brennan King hits for the cycle and drives in 8 runs as the Red Barons beat Toledo 14-2.

1896: Outfielder Ed Delahanty went 5-for-5, including 4 homers (two of them inside-the-parkers) and 7 RBI in a game vs. Chicago. The Phils still lost, 9-81897: Ed Delahanty went 9-for-9 in a double-header against Louisville. He went 4-for-5 in the next day's gaming, tying a league record with 3 consecutive games with at least 4 hits.1900: Harry Wolverton ties a major-league record with 3 triples in a game, as the Phils beat Pittsburgh 23-8.1923: Red Miller, a former Phillies batboy, clubhouse attendant, and batting practice pitcher, was called out of the stands to suit up when Cincinnati was routing Philadelphia. Miller, who pitched semi-pro ball at the time, came into the game to pitch one scoreless inning, then was back on the mound the next inning and surrendered six hits, a walk, and a total of six earned runs in 2/3 of an inning. Cincinnati won 21-7. 1941: Starter Cy Blanton gives up 13 hits to St. Louis over 5+ innings -- all of them singles. He took the loss in the 8-5 contest.1976: The National League wins 7-1 at the first All-star game at the Vet. Greg Luzinski started in left field, and Dave Cash, Mike Schmidt, Larry Bowa, and Bob Boone represented the host team.1993: Terry Mulholland starts the All-Star game in Baltimore's Camden Yards--the first time a Phillie was chosen to start since Steve Carlton in 1979. John Kruk and Darren Daulton also started, and Dave Hollins was selected as a reserve player.

1954: Manager Steve O'Neill is fired, and replaced by Terry Moore. O'Neill finished his stint at the helm of the Phillies with a 182-140-2 record. Moore had formerly played for St. Louis.1968: The Phils' victory over the Mets sets a team record for the longest undefeated road trip at 7 games. The Phils took 4 from the Pirates, and 3 from the Mets, including double header sweeps of each host.1978: Jose Cardenal hits into an around-the-horn triple play vs. the Braves in Atlanta. Greg Luzinski and Richie Hebner were the base runners. 1984: The Phillies issue 7 intentional walks in a 16-inning game against Houston, a major-league record. They lost the game 3-2.2010: The Cubs' Starlin Castro, the first major-leaguer born in the 1990s, hits a triple off of Phillie Jamie Moyer, who is 27 years and 8 months older.