Where have all the errors gone?

MLB has seen a big drop in errors over the years. Why?

Share All sharing options for: Where have all the errors gone?

It's clear baseball is changing.  Just in the past decade, for instance, we've seen strike outs are up and home runs are down.  Some of that has an easy explanation, as the game has worked to remove PEDs and a great crop of young pitchers has come into the sport.

In the midst of poking around on this subject, I found something very interesting about a stat that doesn't mean as much as it used to, but still tells us something about what happens in a game - errors.  Errors have been dropping steadily throughout baseball history, and the decline continues to this day.

Here are two graphs that show this pretty clearly.  First, from 1871 through today, here's the per game team error rate: 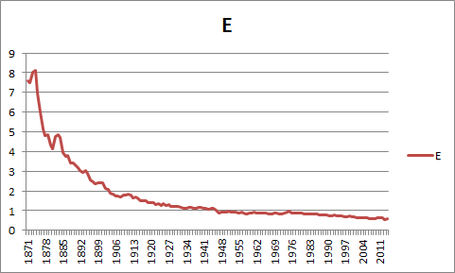 Focusing a little more recently to show the trend within the smaller numbers, here's the same data from the start of the DH in the American League (1973) through today: 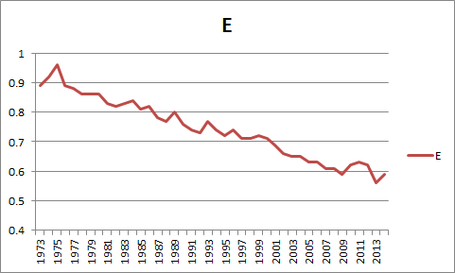 As both graphs show, the decline is not unbroken, especially with a blip up in the late 2000s through early 2010s, but the overall pattern is 100% clear - baseball is seeing fewer and fewer errors now than it used to.

Before getting into possible explanations (and to give away the end here, I have no conclusions whatsoever, just possibilities), one obvious explanation might be that there have been fewer balls in play over time.  Fewer balls in play means fewer opportunities for errors, so maybe that's what's happening here.

There is something to this point, but further analysis shows that it doesn't explain what's going on.  Here's a graph of team balls in play per game from 1871 through 2014: 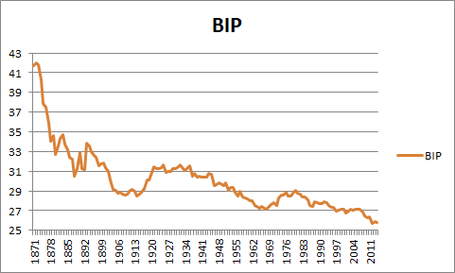 This trend is evident since the DH as well: 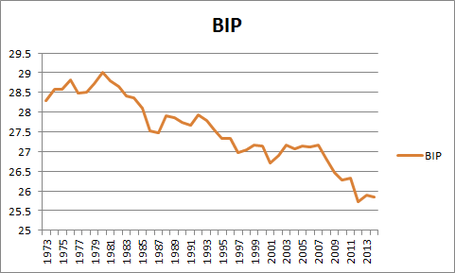 Fewer balls in play, fewer errors - that's the explanation, right?  Wrong.  Looking at the ratio of balls in play to errors shows that there has still been a decrease in errors over the years.  This ratio, which I'll label BIP:E, tells us how many balls are put into play for each error.  Thus, BIP:E of 30 means that for every 30 balls in play, there is 1 error.  Using this stat, higher numbers indicate fewer errors being made.

Here's the BIP:E ratio in the major leagues since 1871: 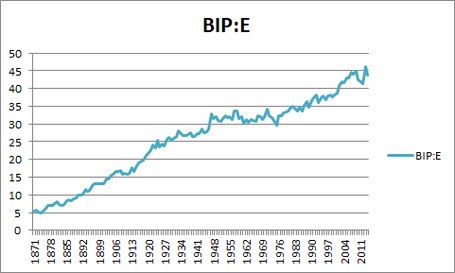 It's really remarkable how bad the fielding was at the start of the sport.  For every 5 balls in play, there was an error.  Compare that to today, when there's an error for every 44 balls put into play.  The game has completely changed in this regard.

Again focusing in on the more modern era, here's how BIP:E has changed from 1973 forward: 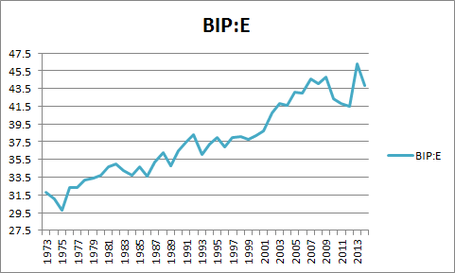 Again, this doesn't show a perfect year to year increase, but there is an obvious trend here that's the same as the overall trend of errors per game -- there is a steadily increasing number of balls put into play that do not result in errors.

So what explains the disappearance of the error?  As mentioned already, I have no answers to this question right now.  But, I wanted to present this data in the hopes that we can have a discussion about it that might lead somewhere.

Of course, I do have some possible explanations.  In no particular order of importance, here are five possible reasons for these changes:

1) Better fielders:  The players have become better fielders.  They focus on fielding as a major part of their game.  They work on it in the off-season (rather than joining a road construction crew).  They work hard on their fielding, just like their hitting.  This work has paid off, and fielding has improved.

2) Better positioning:  As baseball has developed, so has our understanding of how to position players on the field.  With better positioning, fielders do not have to make stretch plays as much and instead are able to make a larger number of routine plays where they can field the ball cleanly.

3) Better equipment:  I'm sure that this explains the huge drop from the early days of the game.  Gloves are much better now than they were in the past.  But, I'm not so sure this explains much in the past couple of decades.  I could be wrong though, as there may be advances in glove technology that I know nothing about, but I doubt this is much of a factor anymore.

4) Official scorers:  It's possible that official scorers have steadily taken a dislike to the error.  I find this possibility hard to grasp though, as it would take a league-wide steady effort to decrease the error, which would involve so many people making judgment calls every day.  But, this is certainly a possible contributing factor.

The fielding error is clearly a disappearing entity in baseball.  Why?  I don't know for sure at this point, but I've offered some preliminary thoughts on this trend.  I welcome your thoughts in the comments.