The steady decline of the Phillies offense

How are the Phillies doing versus the league average for their position? And how has that changed over time? Quick answers: not very good, and not in a good way.

Share All sharing options for: The steady decline of the Phillies offense

We all know the Phillies offense has gotten worse over the years.  From outscoring all of baseball other than the Yankees in 2007 to being 25th in baseball this year, the progression from an offensive powerhouse to an offensive weakling has been clear.

But how has this decline played out position-by-position?  As all of baseball's offense has declined in recent years, positional deficiencies aren't entirely clear without looking more closely.  To help better understand the Phillies decline, I'm providing the NL positional changes since 2002, the Phillies changes since then at each position, and then a comparison of the two.  For the comparisons, I'm using wOBA as the overall measurement of offensive value.

First, the outfield changes in the NL from 2002: 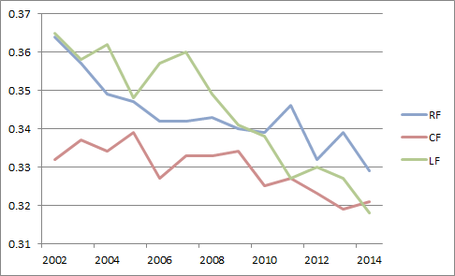 NL outfield production has declined in a hugely significant way since 2002, with left field suffering the most.  That position has lost almost .050 wOBA in the past decade-plus.  Right field has suffered as well, with center field declining a bit, but not nearly as much as the other two.  With center field generally considered the least productive outfield position offensively, it's amazing to see left field fall below center this year.

Here's how the Phillies outfield has performed since 2002: 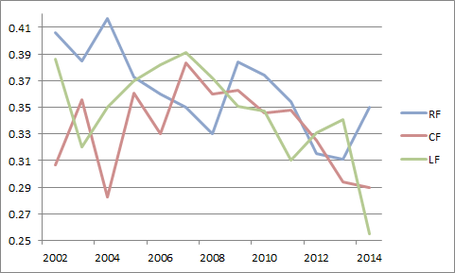 The right field line makes me weep for the days of Bobby Abreu and Jayson Werth.  Marlon Byrd is performing nicely, no doubt, but we've been blessed with two stellar right fielders recently.  The heyday of Pat Burrell, Aaron Rowand, and Shane Victorino also makes this chart look awfully nice . . . until 2010 when it all collapses.  The blip that was Domonic Brown's 2013 and Byrd's good first half this year notwithstanding, the Phillies offensive decline in the outfield is a huge part of the team's overall decline. 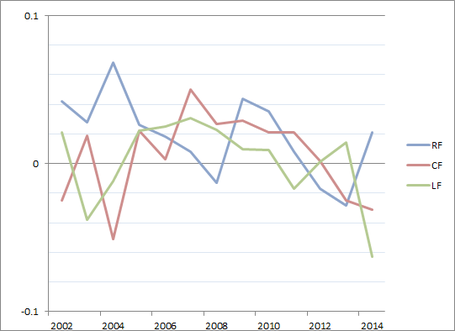 The comparison shows pretty much the same thing -- the decline over the years has put the Phillies outfield production mostly well below league average.  Despite the declining overall production of the various outfield positions in the NL, especially left field, the Phillies decline has been worse, giving them an outfield that has been consistently below average in the past few years.

Moving to the infield, here's how the positions have changed in the NL from 2002: 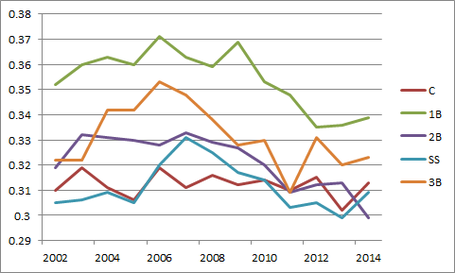 Here's how the Phillies' infield has performed in that same time: 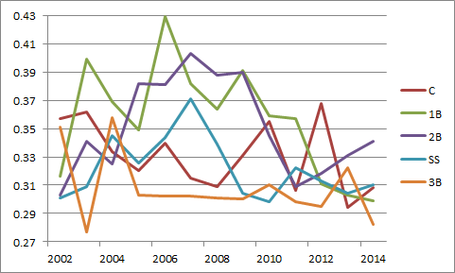 The dominance of the lifelong Phillies quadrafecta of Ryan Howard, Chase Utley, Jimmy Rollins, and Carlos Ruiz shows through here, especially looking at the peak years for each of them.  At the same time, the drop-off for all four has been stark.  Third base, well, it's been a problem position for so long now, so this chart should be no surprise.

But how about comparing the Phils to league averages: 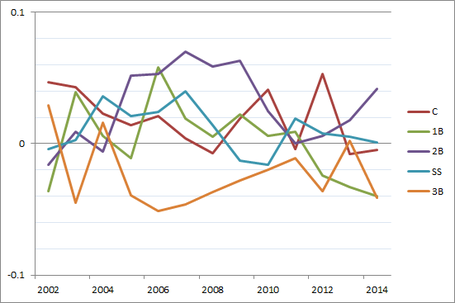 But looked at in comparison, a few things come out here.  First, Chase Utley's peak is beyond compare.  And his recent decline in overall performance looks much better in comparison to the positional decline.  Second, the Phillies' first base performance is now just as bad in comparison to league average as third base, which is just further evidence of Ryan Howard's downfall.  Third, Chooch and Rollins are still loved loyal Phils, but they've become league average players at their positions, a far cry from where they've been earlier in their careers.  League average isn't something to sneeze at, as it's still far better than replacement value, but they have declined along with league declines.

There are two more hitters that count - pitchers and pinch hitters.  Here's how they have changed in the NL since 2002: 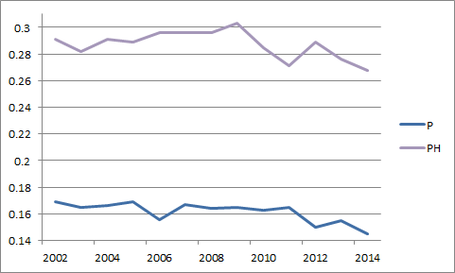 These worst two spots in an NL lineup have also suffered, dropping .020 wOBA over the past 13 years.

How have the Phillies pitchers and pinch hitters done during this time? 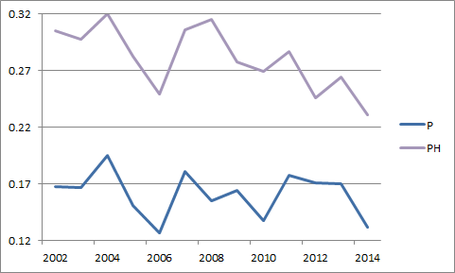 Phillies pitchers have had some semi-decent years, including last year, but this year is horrible at .132.  Pinch hitting has also been a big problem, going from a high of .320 in 2004 to this year's abysmal .231.

The Phillies performance here looks a little different by comparison to NL averages: 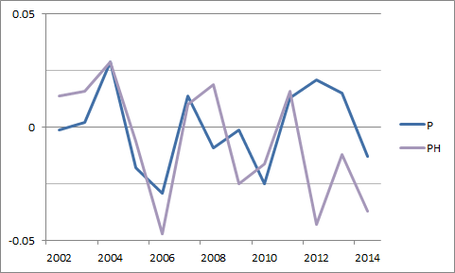 The Phillies' pitching has bounced around league average, with some good years over the past few, while pinch hitting has really suffered in the past several years.  This doesn't tell us much that we don't already know - the Phillies have not had a good bench recently.

All in all, these comparisons show us more of what we know: the Phillies' recent struggles look just as bad when compared to overall positional changes in recent years, the team needs a better way to identify bench talent, third base is a wasteland for the team and has been for a while, the outfield is close to being the same, their aging core is no longer dominating compared to league averages . . . except for Chase Utley, who is still amazing.