The reverse race is on again, with the Phils looking for a top 7 pick (or better) in 2015. 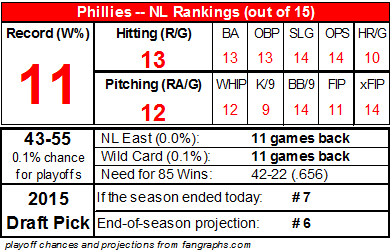 The Giants are in a virtual tie for first in the West. Meanwhile, the Phils are tightening their grasp on last place. 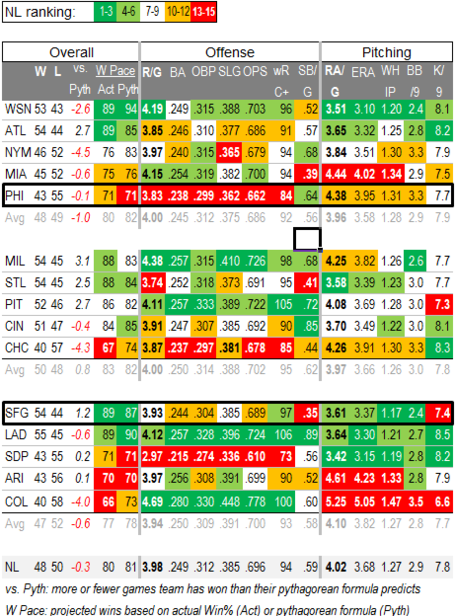 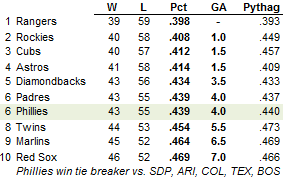 6th based on projected end-of-season standings (FanGraphs: 5th by record, plus comp. pick)

The Giants are 4th in home runs and in ISO despite their pitcher-friendly home park. Accounting for that also pushes their overall hitting from 11th (wOBA) to 5th overall (wRC+).

What they do relatively little of is steal any bases. And when they do, they're not particularly good at it.

Old friend Hunter Pence is leading the way with 3.5 fWAR, which projects to 5.7 for the full year and would beat last year's career high of 5.5. Only ten position players across all MLB have racked up more than Pence's 9.0 fWAR over the last year and a half. 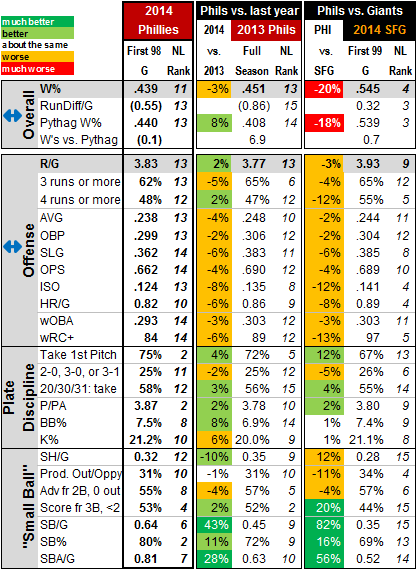 Franzke: "[Someone] said he's impressed with the way Sizemore "mentally shortens up" with two strikes."

LA: "I wish there was more of that up and down the order."

Well, LA, it turns out that no team in the NL does better with two strikes (relative to their overall hitting) than the Phillies do.

Overall, the Phils' .662 OPS is next to last in the NL, ahead of only the woeful Padres. But their OPS with two strikes is 6th in the league, actually slightly above average. In fact, the OPS that they retain with two strikes (76% of their overall OPS), is the best in the NL: 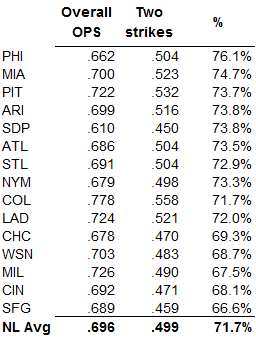 LA, yet again, falling back on the "why, in my day" trope.

The Phillies have flirted with the very bottom of the NL's fWAR rankings throughout the year, and as of now they are again last in the NL in combined team WAR: 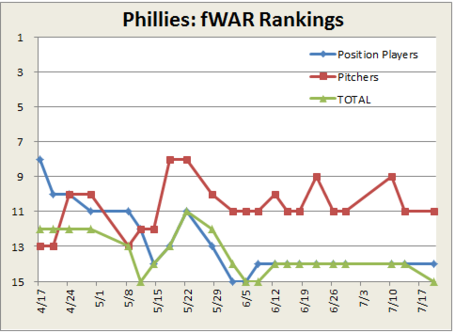 Giants
San Fran ranks well in most key pitching metrics. When adjusting for their park, xFIP- still ranks 4th, but ERA- (7th) and FIP- (8th) are only around league-average. 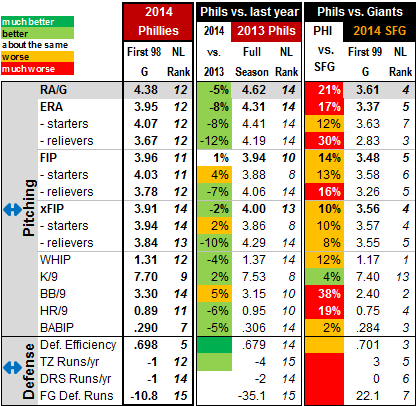 It should be noted that Sizemore also started hot with the Red Sox: 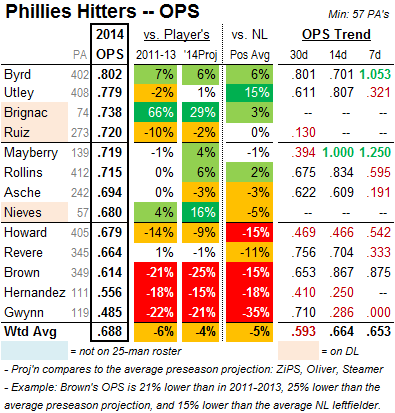 Byrd has retaken the lead in the team OPS battle. 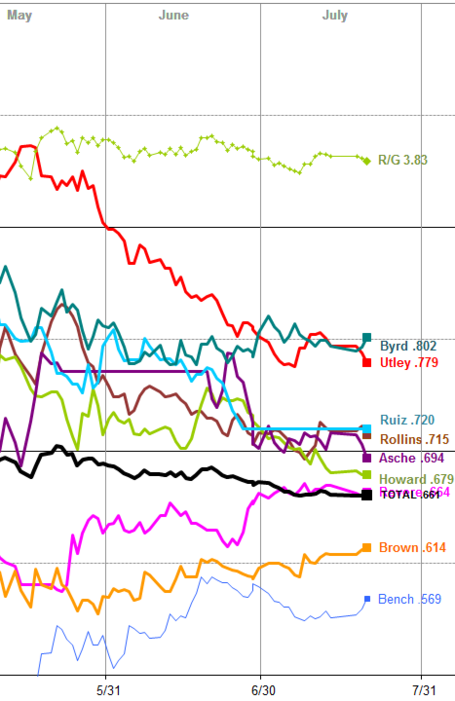 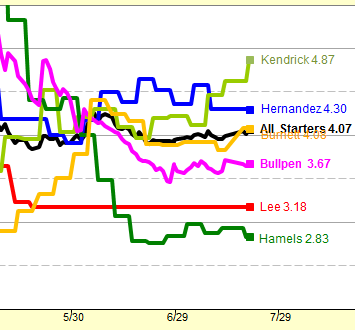 1923: The Phils score 12 runs in the 6th inning in a game against the Cubs--a team record for most runs scored in an inning that stood for 80 years.1960: Robin Roberts threw the third 1-hitter of his career, a 3-0 victory over the Giants at Candlestick Park. The game's only hit was fielded by third baseman Joe Morgan, who got to the ball but fell down before he could complete the play.1973: Pitcher Ken Brett yielded Hank Aaron's 700th career HR. The Phils beat the Braves anyway, 8-4.
1997: Traded Darren Daulton to Florida for Billy McMillon.2007: Jack Russell Stadium in Clearwater, FL, spring training home of the Phillies from 1955 to 2003, was demolished.2012: Tim McCarver received the Ford Frick Award for excellence in baseball broadcasting from Baseball's Hall of Fame.
[Noooooooooo!]
Also: Happy 40th birthday, Geoff Jenkins. He is currently a coach with the independent Peoria Explorers.

1921: The Phillies drop a 10-0 decision to Pete Alexander and Chicago. Two Phillie pitchers combined to allow 23 hits without walking a batter or striking any out.1970: The Dodgers' Bill Singer no-hits the Phils for a 5-0 win in Los Angeles. Singer also gave up no walks, but lost the perfect game on his own two errors, one a throwing error which pulled the first baseman off the bag on Don Money's infield chopper. The Phils argue it should instead be a hit.1973: Brought in to protect a 6-4 lead in the 9th, rookie Dick Ruthven serves up a deep fly ball to Atlanta's Dusty Baker. Rightfielder Bill Robinson climbs the outfield wall at Atlanta Stadium to take away the potential tying home run, earning Ruthven the only save of his career, which saw 332 starts.1997: In his only at-bat of the year, Jerry Spradlin strikes out. He records a single at-bat in each of the next 3 years.2002: Tony Taylor is enshrined in the Phillies Wall of Fame2009: In the first inning of a 10-1 victory over the Cubs, Raul Ibanez hits a 3-run home run, his 25th of the year. It's also the 207th of his career, which moves him past Pete Incaviglia on top of the all-time list of home runs by a player with a last name starting with I.

1918: The Phillies recorded only one hit in a 1-0 exhibition loss to the Athletics. Proceeds from the game, postponed from April, went to the family of the late William Weart. Weart died in 1917-19 flu pandemic. He was a longtime Philadelphia sportswriter/editor and secretary of the Baseball Writers' Association. 1925: Facing the Pirates, George Harper came to the plate but was sent back to the dugout because the umpires found nails in his bat. After returning with a new bat, Harper struck out on three pitches.1958: Eddie Sawyer returns for his second stint as Phillies manager, taking over from Mayo Smith, who earned a 264-282-2 record as skipper. Sawyer had been working for a golf ball company in between stints with the Phillies.1964: First baseman Danny Cater breaks his left arm in a 4-1 win over Milwaukee, when he collided with Joe Torre at first base. 1966: Gaylord Perry fans 15 Phils to set a San Francisco record.1969: Richard Nixon commemorates the 100th anniversary of baseball with a White House reception. Representing the Phillies were owners Bob & Ruly Carpenter, GM John Quinn, manager Bob Skinner, and players Grant Jackson and Mike Ryan. 2012: Shane Victorino singled off of San Francisco's Matt Cain to record his 1,000th career hit. He became the first player born in Hawaii to reach that milestone.