Out of the Park Baseball 15 - A Phillies Perspective

The best baseball simulation game of all time is here for another season, and if that sentence makes you smile, you're a nerd like me.

Share All sharing options for: Out of the Park Baseball 15 - A Phillies Perspective

First, a confession. There are two reasons that this article is running now instead of two months ago:

2. My computer became sentient, and during the struggle for its freedom, Tywin Lannister sacked the hard drive containing numerous screenshots.

So, the screenshots presented herein are somewhat more generic than I'd initially like.

Out of the Park Baseball 15, by the fittingly named Out of the Park Developments is this year's iteration of the world's best baseball simulator; and is really awesome. I think if Chase Utley had gone into video game programming instead of baseball, he'd have invented something like OOTP.

You're not limited to North American organized baseball, however. You can setup the Nippon league, if you want. Or South Korea. You can create your own, entirely from scratch, with customized rules and teams. You can have a team from Nigeria play a team from Wales for the All-Nigeria-Wales Trophy.

Now, I had planned to catalog the performance of the 2014 and 2015 Phillies, which, believe it or not, culminated in a wild card win in '15, thanks largely to the bat of MVP winner Giancarlo Stanton (oh yes I did), but, as mentioned previously, I can't provide much substance there.

Before I get to the meat of this largely vegetarian review, there are a few goofy things about this game that I want to mention.

The game uses Facegen technology to generate images of faces. Woah. In any case, the faces are rarely close to the person they're supposed to represent, and frequently somewhat offputting.Starting a new MLB game fills the Major Leagues, by default, with randomly named teams such as the Kansas City Bonecrushers or the Philadelphia Dancing Bananas. 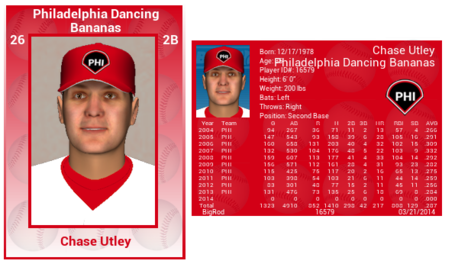 Another annoyance: WAR is featured, and it seems to track better with Baseball-Reference.com's rWAR, but there's no historical WAR data. Utley, for example, has a career WAR on 4/1/2014 of zero. As does everyone else. It counts up as seasons progress, so if you create a new league from scratch in the ancient past, and have it simulate through time, everyone's stats will be there, but otherwise, historical WAR doesn't exist.

Also, player ratings are scored up to 250 on a 200 scale (though you can choose to display 80 instead), but potential ratings, especially of real players, don't always make sense. For example, the game thinks Mario Hollands has a significantly higher ceiling than does Jesse Biddle. Players frequently develop beyond their listed potential as well.

Gameplay: 70/80. Several modes within games themselves, including hands-off (like a real GM) and hands-on (like a GM/Manager); the ability to cut loose the computer to do the best it can day-to-day or over an arbitrary length of time: pretty much, you can do whatever you want to.

Graphics: 50/80. For what they are, the graphics in this game are fine. If you're the kind of nerd who used to do this with pen and paper and dice, they're outstanding. If you like MLB The Show, these will remind you of your 8086 PC. This year features a new 3D mode, which has a lot of promise, but leaves quite a bit to be desired as yet. 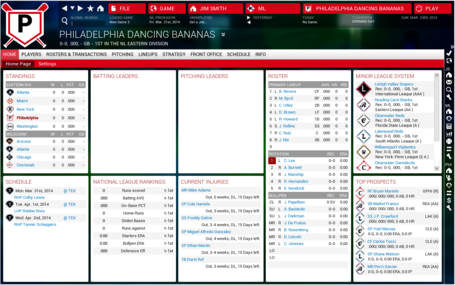 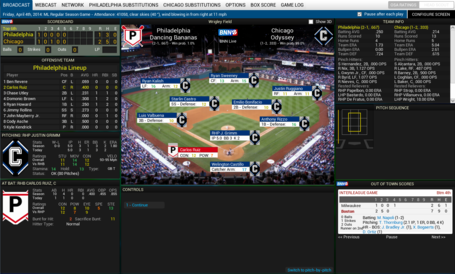 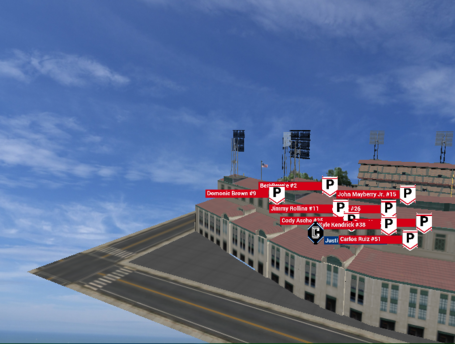 Attention to Detail: 160/80. Absurd. This breaks the scale. This game's detail is Giancarlo Stanton's power on a Little League field (a real one, Mr. McCann). For example, one can quickly pull up the 1883 Phillies nee Quakers, and see that 20 year old John Coleman walked only 15 times in 354 ABs. Playing in MLB mode, the game's History mode is only a step shy of a downloaded Baseball-Reference.com. It's got everything. Of course, if you're looking for RBI Baseball, this isn't gonna be your thing.

Learning Curve: 40/80. If all you want to do is pick it up and start owning fools and trading for Giancarlo Stanton, well, you can, but it's gonna be tough. If you've never touched a game like this before, it's going to take some getting used to.

Overall: 75/80. This game really is the best of its kind, and I heartily endorse it.

Out of the Park Baseball 15 is available for Windows, Mac, Linux, and on Steam for $39.99. If the 2014 Phillies aren't providing your baseball fix this summer, give it a shot.