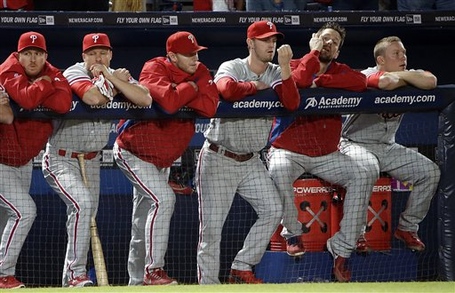 A sizable portion of Phillies fans began to prepare themselves for a poor season heading into 2014. Some may argue that they're having a worse season than anyone could have predicted, but you'd be selling a decent amount of doom-and-gloom'ers short. However, not even the true Negladelphians out there were ready for this. The Phillies are giving us more bad than we bargained before because they're simply playing more baseball than we've ever had to watch.

The Phillies, through July 27th, are averaging three hours and twelve minutes (3:12) per game played, longest in franchise history. The current record over a full season was back in 2007 (3:03) who luckily spent the majority of that time keeping us on the edge of our playoff drought ending seats. The 2014 version of these procrastinators are more concerned with racking up negative run differential and Not Playing the Game the Right Way™ moments. While 2014 is seeing longer games across the league, its only by the similar modest increase (~ 4 minutes) the league has seen for the past 3 seasons. Last year, the Phillies were just under 3 hours (2:59) average game length and you have to go back to the aforementioned '07 team to find the last time their games averaged over the three hour mark.

Is it replay? Is it Sandberg? Is it just the evolving game of baseball and their telecast? While all may contribute, the answer is ultimately - No. The Phillies are doing it with an unprecedented purge of awfulness that seemingly only a team stuck in such a future-less rut could muster. They are boosting their average game length by racking up +4 hour suckfests at a higher rate than any team in MLB history has dragged their fans through.

Through the team's first 105 games, they have had a league-leading 10 games last over 4 hours. The franchise record for a full season was 7, back in 2002. The MLB record is 13 games, shared by the 2013 Red Sox and DBacks, which gives the Phillies over 50 more games to dethrone them. Unsurprisingly, the Red Sox and Dbacks led their respective leagues in average game length that season, but the sadistic Phillies are currently only 9th. So while the Phillies are normally torturing us with a sauntering parade back to the dugout of hitless innings at a respectable pace, they know just when to twist the knife into an all-nighter.

Whoever said the Best Things in Life are Free never endured Tom McCarthy shriek "It's time for free baseball!".

** www.baseball-reference.com is the source of all game length data.