Things went predictably poorly this afternoon for the Phillies, and then Phillippe Aumont came out of the bullpen.

It had no bearing whatsoever on the outcome of today's game, really, as the win expectancy needle hovered around 100% for the Mets, who were winning 9-2. Nevertheless: I am obsessed with metaphor, and obsessed with Phillies reliever Phillippe Aumont, so allow me to begin this afternoon's recap with an account of Aumont's 34-pitch eighth inning performance. First, the events themselves:

Quelle dommage, as they say in the Frenchiest French parts of Quebec. It was truly a grand performance, especially when matched with the commentary of Phillies TV announcers Tom McCarthy, whose inner Mets fan heart quietly thrilled to the continuing beatdown of these smaller-town rivals while playing straight man to former Phillies pitcher Jamie Moyer, who expressed alternating waves of marvel for Aumont's talent and "stuff," and perplexed, suffocated disgust that it was being so very lost within an untranslateable demeanor.

I could not stop watching as I realized that Aumont is everything about these 2014 Phillies here on Erev Trade Deadline: A collection of talent, permanently lost in translation, and an artifact of a kind of post-championship retarded organizational transactional-rather-than-strategic thinking. I've particularly appreciated how the Phillies and Aumont have hung onto each other way past their expiration date, like a bickering couple at a neighborhood cookout that everyone else politely excuses themselves from talking to, and quickly at that. It was all there: the inability to accomplish fundamental tasks (preventing leadoff singles; missing over the plate when the catcher sets up inside; giving up a titanic home run to a growing young divisional talent who will haunt us for years; visibly losing composure on the mound and playing spastically without a purpose; batted chances that just eluded defenders' grasps or were simply difficult to handle, and yet striking out two of the opponent's better hitters), the foregone conclusion, the terrible, tragic, pointless waste of time it all felt like.

Previously, I had considered Aumont as a tragicomic figure along the lines of Michigan J. Frog from the Chuck Jones cartoon "One Froggy Evening" - an insane talent that is invisible to everyone but the Phillies, whose performance only soars when no one else is watching. 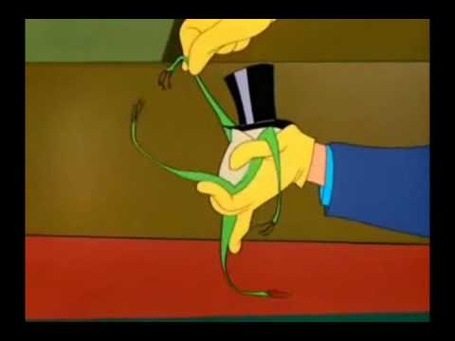 Now I think it's bigger than that, although it gets us most of the way. In the short term, we will, like the star-crossed construction worker who was left to ruin in a psychopathic hospital for years, need years of therapy to be rid of the state the Phillies are in now. And let's not forget this other element of the cartoon toward the end, when we flash ahead to the year 2056, and we see the frog unearthed again. So this has happened all before, it is happening now, and it will all happen again.

As for the game, perhaps this is all a little too harsh toward Aumont. After all, if you think that was bad, you should have seen Justin De Fratus and Mario Hollands pitch! Whoooee! That was a stinker too. Really, though, when it came down to it, it was Phillies starter Kyle Kendrick, with the score tied at 1 in the fifth inning, who, when reminded by his shortstop Andres Blanco that it was time to blow out a tire, promptly did so and careened into the brick wall, serving up a three-run home run to Daniel Murphy.

Sure, it might have been worse. Ben Revere caught this long fly ball off of the bat of Lucas Duda:

Finally, I'd be remiss in not pointing out Jimmy Rollins' pinch-hit home run in the 7th that accounted for the Phillies' second run. He's really having a helluva year, so enjoy it when the frog sings and no one in baseball watches.