The Nationals have found their footing and while their NL East lead remains small, they have the highest run differential in the NL. The Phils would get the 6th 2015 pick if the season ended today. 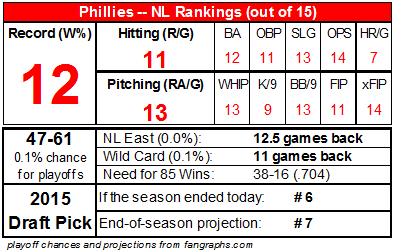 The Nats are holding on to a 1.5 game lead over Atlanta... 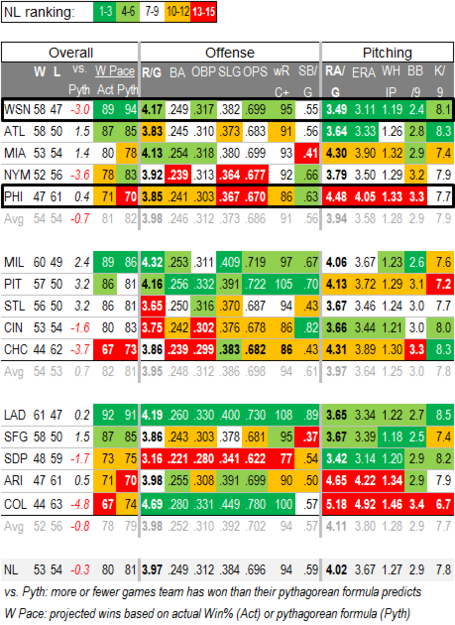 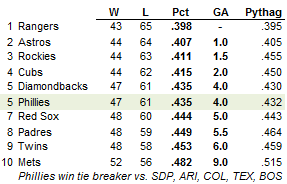 Thanks in large part to the Nationals, who lead the NL in run differential, the East continues to expand its lead in that measure: 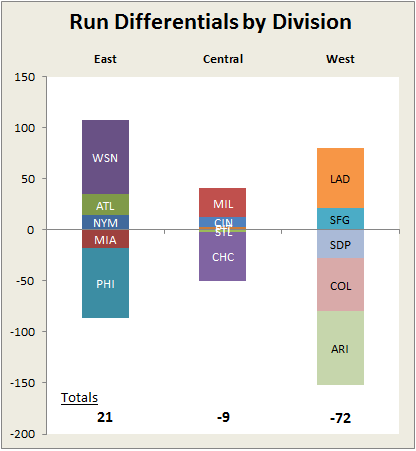 Phillies Team Stats vs. 2013 and vs. Nationals

Their walk rate has gone from...

The Phillies are now last in the NL in scoring 3 or more runs (i.e. have the most games with 2 runs or less), not counting the Padres, who are in a league of their own this year.

NationalsOverall as a team, the Nats don't do anything great, but do enough things well that it adds. They are near the bottom in steal attemps, but lead the league in stealing success rate (Phils are second): 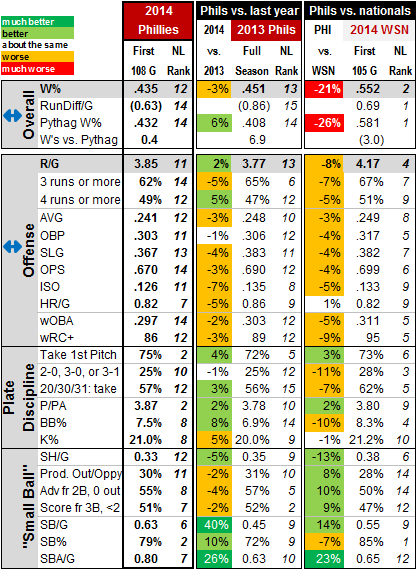 The slew of small numbers in the far right column shows how good the Nationals' pitching is. Compare and contrast with the rankings for the Phillies... 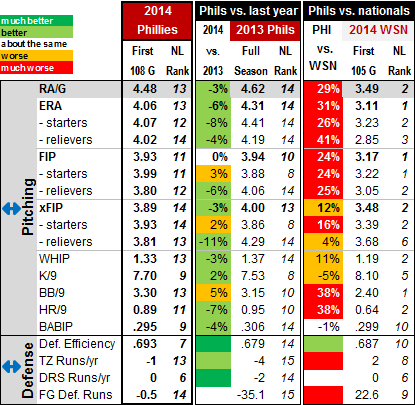 Grady Sizemore added below (his Phillies stats only).

That bottom third of the table is quite depressing:
- Howard is squarely in backup catcher territory
- Revere is hitting .300 but is still a below average hitter in CF
- Asche is forced to fall back on "Schmidt also sucked his first year"
- Brown has shown signs of life but his first half was sooo bad
- even Hernandez has disappointed, though in limited opportunities 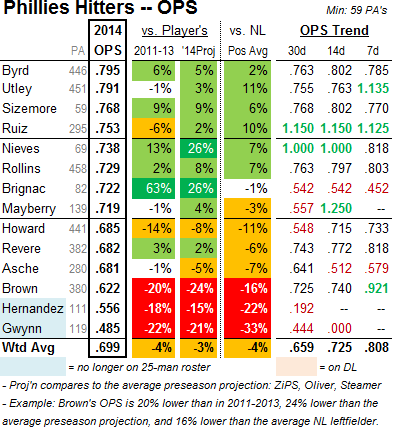 1931: Goldie Rapp goes hitless in Chicago, ending a 23-game hit streak, most ever by a Phillies rookie.1982: Manny Trillo makes an error in the seventh inning of a game against Chicago, snapping a major-league record streak of 89 consecutive errorless games.1987: Steve Bedrosian earns his 30th save of the year, the first time a Phillie reached that mark.1993: Danny Jackson records a team-record 3 sacrifice hits in a game vs. the Pirates. he also goes the distance on the mound for the 10-2 victory.
[3 sacrifices in a game has been done 15 times by a Phillie; since 1993: Chad Ogea in 1999, and Cliff Lee last year] 1994: Kim Batiste goes 1-for-3 with a walk as the Phils lose to Atlanta 9-5. It was Batiste's only walk in 209 at-bats that year.
[Most PAs by a Phillie in a season with only 1 walk: Batiste in 1994, 214
Most PAs by a Phillie in a season with zero walks: Mariano Duncan in 1995, 201]1994: Steve Carlton is inducted into Baseball's Hall of Fame in Cooperstown, NY.
Also, John Vukovich would have been 67 today.
Surprisingly for this date, not many big trades:
1996: Traded Terry Mulholland to Seattle for Desi Relaford
2012: Traded Shane Victorino to Los Angeles (NL) for Josh Lindblom and Ethan Martin.2012: Traded Hunter Pence to San Francisco for Nate Schierholtz, Tommy Joseph and Seth Rosin.

1937: Phils first baseman Dolf Camilli plays all 9 innings without making a putout1957: Signed earlier in the day, Ron Northey hits a 2-run pinch-hit home run to help the Phils beat Cincinnati. It's his eighth career pinch-hit home run, tying a major league record1959: Willie McCovey went 4-for-4 in his major league debut, including 2 triples, as the Giants beat the Phillies 7-2.1995: Mike Schmidt and Richie Ashburn are inducted into baseball's Hall of Fame.2006: Ryan Howard draws 5 walks in a game against Florida, tying a major-league record. The Phillies win 11-4.

1950: The Phils lose star pitcher Curt Simmons to military duty. Simmons was the first major-leaguer to serve in the Korean War.1953: Hall of Famer Warren Spahn one-hits the Phillies. Richie Ashburn's fourth inning single was the Phils' only hit.1958: Robin Roberts does the distance in a 3-1 win over Chicago, earning his 200th career victory.1971: Tied after 11 innings and two rain delays, the Cards take the lead with 3 runs in the 12th. Before the Phillie come to bat, the game is again delayed by rain and the grounds crew claims the machine needed to clear water off the artificial turf is unavailable. The game is initially ruled a 3-3 tie, but the Cards protested and won. On Sept. 7, play resumed from the point of suspension, and the Phils managed 3 runs in the bottom of the 12th but lost after yielding another 3 in the 13th.1996: Scott Rolen makes his major-league debut in the first game of a double-header against the Cardinals. He doubled in his second at bat for his first major league hit.2004: Randy Wolf allows a hit to the first batter he sees, but still retires the Cubs on three pitches. Corey Patterson singled, Nomar Garciaparra hit into a double-play and Moises Alou grounded out -- each on the first pitch they saw.
2011: Released Dannys Baez