A Day of Disconsolateness: Phillies 10, Washington 4

Today was an active day across the league. For Phillies fans, things could have gone better. Even tonight's win was spoiled.

Share All sharing options for: A Day of Disconsolateness: Phillies 10, Washington 4

The Phils-Nationals game tonight was scheduled for 7:00, three hours after the end of the non-waiver trade deadline. It came and went without the any movement by the Phillies.

Relax, we were told, there remains the August waiver-deadline, and surely a few good starts from Cliff Lee would restore his trade value to the levels at which it would make sense to move him to a contender for a quality prospect or three.

Then, 31 pitches into tonight's game, this happened: 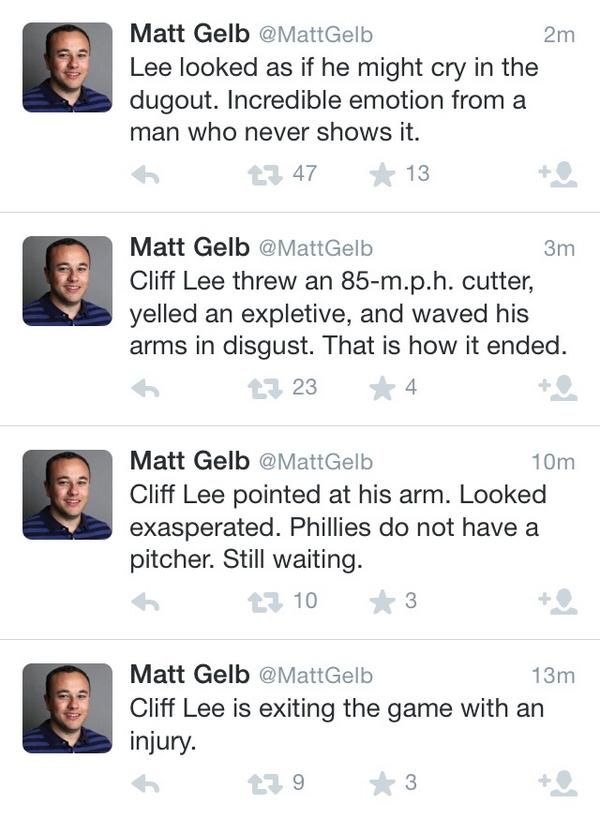 And the early prognosis:

Left elbow strain for Cliff Lee. His season is likely done. Now, can 2015 be saved?

I want to die.

Despite the large-scale stuff unraveling, there was a game tonight and there were some positives to take from it.  Gio Gonzalez kept the Phils off the board for the first three innings, but they erupted for 5 runs against him in the fourth. Marlon Byrd and Carlos Ruiz both singled to left field, putting men on first and second with no outs. Grady Sizemore tried to bunt them over (see the Piers Morgan tweet above), but failed, so with two strikes he went back to actually trying to hit the baseball and drove a two-run double into the right-center gap. Darin Ruf then walked, and Andres Blanco sacrificed the runners along to second and third. Dom Brown then pinch hit for Bastardo (who had, for some reason, been the choice to replace Cliff Lee in the 3rd inning), grounding into a drawn-in second base. Espinosa came home, but Sizemore broke on contact and was slide in before the throw as Ruf advanced to third.

On the other side of the ball, before the Cliff Leepocalypse, he had been mowing them down like the pre-injury Lee. He breezed through the first and second innings, and only allowed one hit in his 2+ innings, a double to Danny Espinosa. His final line was 2.2 IP, 1 H, 0 R, 0 ER, 0 BB, 4K. It was vintage Lee, just not enough of it. Bastardo got the last out of the inning, and was out of the game after throwing two pitches in the third inning. Strange usage, but what do I know, I'm no professional manager.

The Nationals got on the board in the 4th, as Mario Hollands allowed a walk to Anthony Rendon, threw a wild pitch, then after a Werth strikeout allowed Ramos to drive Rendon in on a single to center. Washington added two more in the 5th as Hollands opened the inning by allowing consecutive singles to Harper and Frandsen. He got Espinosa to foul out while trying to bunt (side note: haha you idiots), then plunked pinch-hitter Scott Hairston. Span would then chop a bouncing single between the first and second basemen, allowing Harper and Frandsen to score, and with that Sandberg had seen enough of Hollands. Justin De Fratus, in on a double switch with Cody Asche, came in and put out the fire.

The Phils added a couple more in the 6th on a Revere single, a wild pitch by Jerry Blevins, a single by Rollins who proceeded to steal second and third, then a sac fly by Utley. The stolen bases give Rollins 21 on the year, and put him in position for a potential 20 SB, 20 2B, 20 HR season, which Tom McCarthy seemed tickled by.

After a Nationals run in the seventh, the Phillies added three more in the eighth, courtesy of a 2-run single by Byrd and a Sizemore RBI that scored Byrd.  Ken Giles, who had saved the Jake Diekman in the seventh, pitched a scoreless eighth and Jonathan Papelbon did the same in a non-save-situation ninth.

And yet, with the roster the same as it was this morning and Cliff Lee likely out for a long time, it's hard to feel much positive about today.

Fangraph of a sad day in Phillies history: