Taney dominated Newark, Delaware today, 8-0. Mo'ne Davis pitched like the ace she is. It was amazing.

This wasn't supposed to happen, on so many levels.

A team from Philadelphia that was playing in the official Little League tournament for the first time wasn't supposed to become state champs against veteran powerhouses from other parts of the state.

A big city team wasn't supposed to dominate against mostly well-funded and well-oiled suburban machines in the regional tournament.

A 12 year old girl wasn't supposed to look like the second coming of Roy Halladay (or, her favorite player, Clayton Kershaw) in the finals against a team that was in the World Series last year.

And baseball fans from Philadelphia weren't supposed to be going to bars and house parties on a Sunday night in August to watch 12 year olds they don't know play baseball.

But all of these things happened, and it was beyond glorious.  Philadelphia has a baseball team this summer that it can be proud of.  And the nation has a baseball hero they can root for with unadulterated joy.
The team is the Taney Dragons and the hero is Mo'ne Davis.  Tonight, the Dragons destroyed the Newark National, and Mo'ne Davis was most of the reason why.
In the final game of the regional championship, she was as unflappable as Cliff Lee on the mound.  She came out firing, throwing her 70mph fastball (from 46 feet, the equivalent of a 95pmh major league fastball) and her knee-buckling curveball for strikes.  The Newark hitters were helpless against her.
Imagine yourself in her shoes.  She was on national television.  She was starting the regional championship game.  She was the only girl left in the tournament in the entire country.  She was facing the regional champs from last year.  And she did nothing but shut them out on three hits, three walks, and six strikeouts.  Really, only one of the hits was a hard one - a double down the third base line.  The others were a bloop single between the infield and outfield and a grounder that just went over her head and into center field.  Otherwise, she was as dominant as anyone could have wished for in such a high stakes game.  It was amazing to watch.
She had help, of course.  The defense behind her was impeccable.  Jared Sprague-Lott fielded shortstop with the flair and ease of a seasoned professional.  He had a gun to first base that he showed off many times.  (He also had 3 RBIs at the plate - not a bad day!)  There were also some nice outfield grabs and a game-ending 4-6-3 double-play (by 12 year olds!) that had the runner by several steps.
On offense, Taney didn't have a dramatic home run like they did in some other games, but they won with key hits, both bunts and long drives, and excellent base running.  They were aggressive on the base paths throughout the game, taking the extra base whenever they could.
Newark had no answer to this all around dominance -- pitching, hitting, running, and fielding.  Taney, again for emphasis, against last year's regional champs, made it look easy.
It's amazing to write, but this team from Philadelphia, this little league that my sons play in, this organization that entrusted its biggest game to the only girl in the country still playing little league baseball this year, this group of incredible kids who have become the city's heroes, is going to the Little League World Series in Williamsport.
More on what comes next later in the week (first game is Friday at 3pm against Tennessee), but for now, enjoy the victory and the regional championship.
And to Mo'ne Davis and Jared Sprague-Lott and Zion Spearman and all the other Dragons, it's been a pleasure watching and following you.  Keep up the amazing work.  You have a city of baseball fans pulling for you!
***************
Courtesy of my friend Josh Sevin, who was there today, here are a few pictures from today's game: 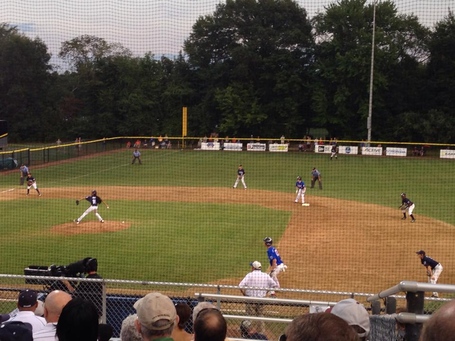 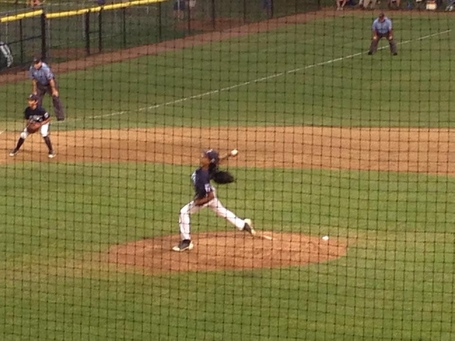 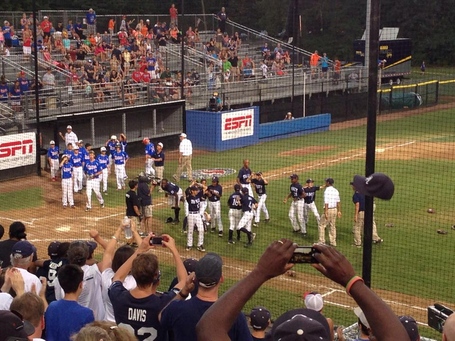 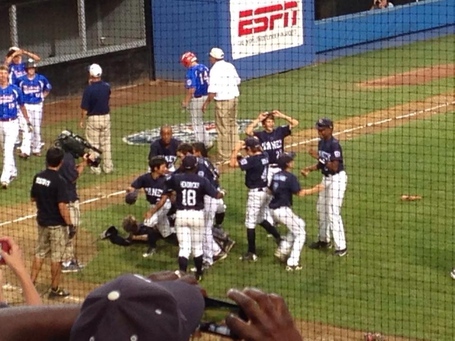