The Phils visit Mike Trout, who is as local as they get. Hamels has been lights out since early May, and Howard has a chance to lead the league in RBIs with the lowest OPS in history. 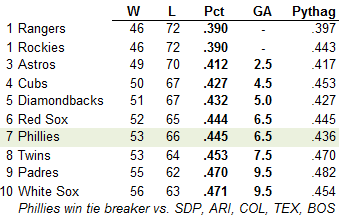 The Phils have been hitting better with runners in scoring position over the last month or so, and their average with RISP has again caught up to their overall average.

Average with and without runners in scoring position: 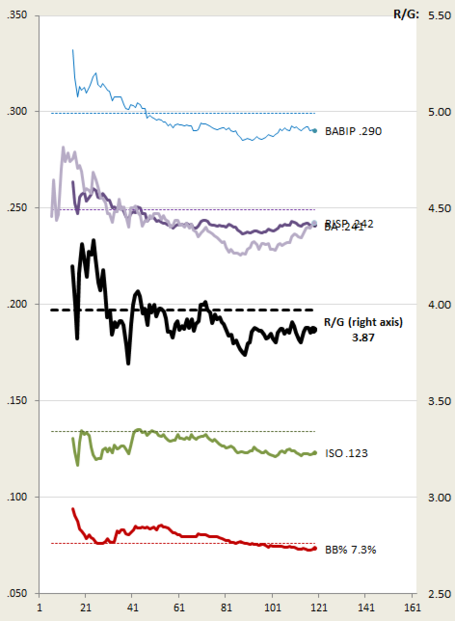 Phillies and Angels at Fangraphs

I haven't checked everyone on that list to make sure, but a quick look shows that if Trout winds up leading the AL, he would become the first player ever to lead his league in RBIs while batting second.

Trout is off to one of the best starts to a career in the history of the game. With a month and a half to go this season, he already ranks high on the list of most WAR through a player's age 23 season, among the fastest starters of the all-time greats: 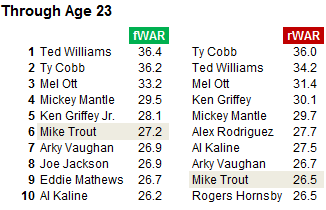 He's already at about 6 WAR this year, by either measure, and is projected to get about 2 more by the end of the season, which would put him 5th on the fWAR list, and 6th in rWAR.

The punchline though is that although Trout just celebrated his 23rd birthday on August 7th, since it's the age as of June 30 that counts for these, 2014 is actually his age 22 season. And compared to other players through their age 22 seasons, even before he tacks on another couple of WAR the rest of this year, he's already the highest in the history of the game: 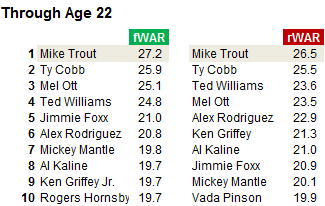 Occasionally some knucklehead will wonder why fans care about Mike Trout and call him a local guy, when, after all, he's from Millville, NJ. Well, Millville may be slightly further than a couple of recent Phillies' home towns, but you can actually get to Citizens Bank Park faster from there than you can from either Jamie Moyer's home town (Souderton, PA), or Erik Kratz' (Telford, PA):

Millville is at "A", Souderton and Telford both around "D"... 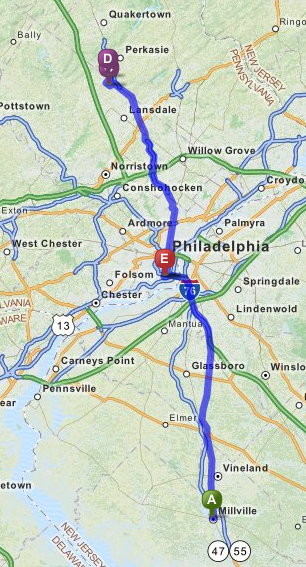 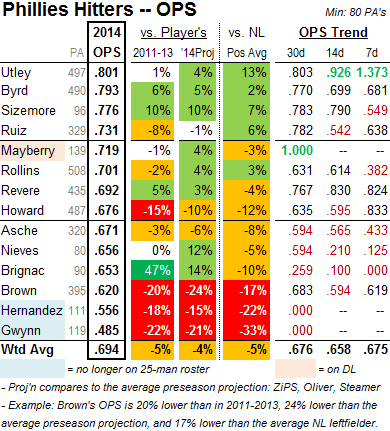 Utley has retaken the lead in OPS. And despite Howard's recent heroics, his OPS remains in the sub-.700 area, where it's been since July 11th.

Something else that's not out of reach (though unlikely) for Howard is leading the NL in ribbies. He is currently 3rd in the NL with 72, behind Giancarlo Stanton (82), and Adrian Gonzalez (80).

The lowest OPS ever for an RBI league-leader was .709 by Heinie Zimmerman of the 1917 New York Giants, so barring a late season surge in his OPS (which it may take anyway to lead the league in RBIs), Howard would blow that away. 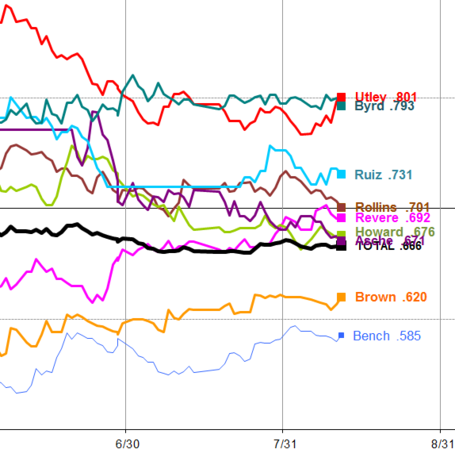 The question came up in a recent game thread about how the Phillies' starting rotation and their bullpen have done since the relief corps' rough start in April.

The bullpen in the first month was at or near the bottom by virtually any key measure. Since then, it's still only about average in ERA, ranking 10th, and a little better in FIP (7th), but is 3rd in the NL in fWAR over that time.

The starting rotation, meanwhile, has staked out the very-bad-but-not-quite-worst territory in every category: 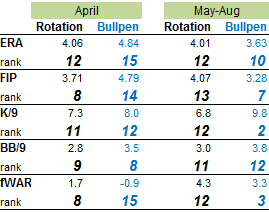 Below is how starters' ERAs have progressed since early May. Note Kendrick's steady rise after a decent start, while Hamels' ERA started high in his first couple of games after coming off the disabled list, but has continually dropped since then. 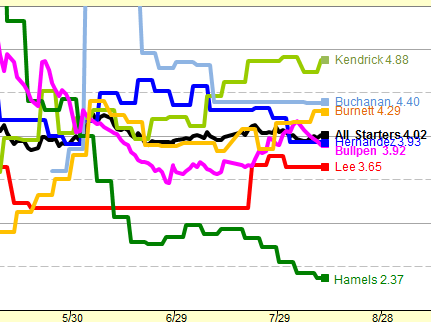 The graph below shows the number of starts for each starter, by a simple quality split:

Quality starts are green (using the basic 6+ IP, 3 ER or less definition). "Bad" starts are in red, simply mean allowing more than an earned run per inning (e.g. 4 runs in 3 1/3). Yellow are all others. 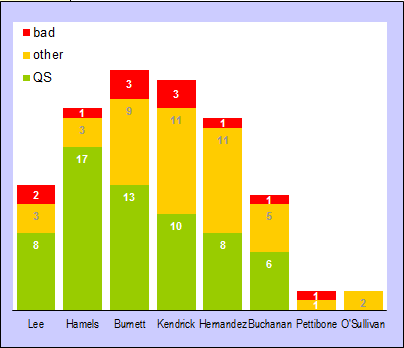