After a solid outing for his Phillies' debut, Jerome Williams was introduced, rather rudely, to his new teammates in the bullpen.

Jerome Williams, recently acquired by the Phillies after being released by the Texas Rangers, made a surprisingly solid outing, pitching five clean innings. He allowed a homerun in the sixth, and was pulled after a second baserunner, but left looking at a 2-2 tie, at worst. He scattered five hits and a walk against three strikeouts.

Williams: "Wow, it's great to be in Philadelphia! Also I pitched rather well, right?"

I've really soured on Anti-no-Dad-o, if you hadn't guessed.

The Angels of Anaheim would end up scoring seven runs in that sixth inning, because, really, if there's one thing this Phillies' team needs to do to succeed, it's to allow big innings.

So, let me digress, because this game was terrible, and I'm sure you'd rather read about something else and where the hell did I come up with that headline, anyway.

This morning, I left Deadhorse, AK, by truck, driving south on the Dalton Highway, which, if you've watched Ice Road Truckers, is pretty insane. Truth be told, that show is somewhat hyperbolic, but the road is an adventure, and today's 505 miles took me somewhat over 13 hours. I arrived back in the land of Reasonable Cell Phone Signals in about the fifth inning, so missed most of Jerome's start, but just in time for Bullpenmania. 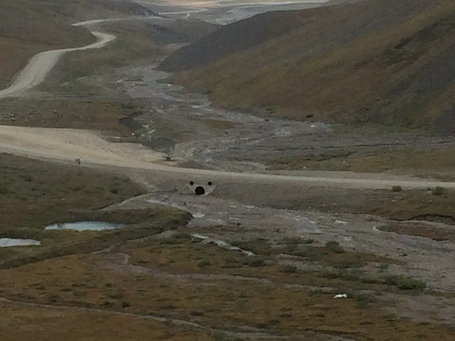 Surprised! Dalton Highway is Surprised! that the Phillies are Bad!

Anyway, it's a beautiful drive in good weather, and a scary one in shitty weather, but that only happens some of the time, so I heartily recommend everyone who visits AK drive up at least as far as the Arctic Circle.

Back to baseball. The Phils ended up with two runs, on a sac fly by Ryan Howard in the fourth and a single by Byrd in the sixth. Aside from that, the Phils' seven hits produced nothing. Poop.

On a side note, Mike Trout went 0 for 4 with three strikeouts, because baseball is anything if not predictable.

Fangraph of Ducks on Driftwood in Slough behind Phrozen's House: 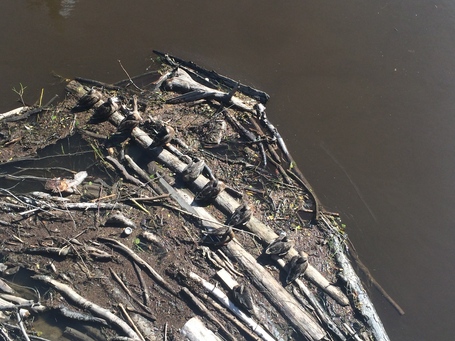 Because, see, the line where the driftwood jam meets the water perfectly resembles today's Fangraph, and also, this one has a bunch of ducks.