The first game of the Little League World Series for the Taney Dragons is today at 3pm. Here's some basic information to help you along.

The Taney Dragons play today at 3pm.  The game will be televised on ESPN.  They play the Southeast region champs from South Nashville, who are in their second consecutive Little League World Series.

For those not familiar with the Little League World Series, the tournament structure is double elimination.  The 8 international teams are on one side of the bracket; the 8 United States teams are on the other.  The winner of the double elimination bracket for the international teams and the winner for the United States teams will square off against each other for the World Series championship next Sunday, August 24 on ABC.

The full bracket is here, though because of the double elimination it's a bit confusing.  To spin it out a little further, a win Wednesday puts them in the U.S. championship game next Saturday at 3:30pm, broadcast on ABC.  A loss in Wednesday's game is not the end of the line, as they get an elimination game Thursday at 7:30pm.  The winner of that game is the other team in the U.S. championship game.

In other words, the U.S. championship game on Saturday will be a matchup between one undefeated team and one team that has lost only once.  All other teams will be out of it by then, having lost twice.

Two other things in this morning's update.  A Facebook page For Harriet posted an amazing photo yesterday.  It features Mo'ne Davis and 78-year old Mamie "Peanut" Johnson, the only female pitcher in the Negro Leagues.  You can read more about Johnson here and here.

If this picture doesn't put a smile on your face, then you are not human. 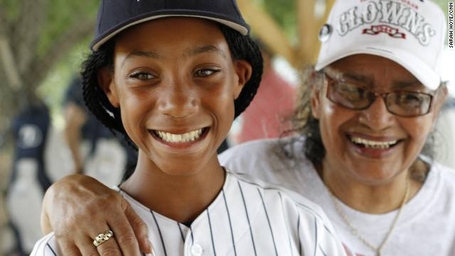 Finally, there are all sorts of happenings around Philadelphia today for the Dragons.  Here's the lowdown from the Taney email earlier today:

1. If you still need a Taney shirt or cap, they are available for immediate purchase at Triple Play Sports (9th & Christian, Taney team shirts with player names on the back) and at Modell's (Chestnut Street, Oregon Avenue, and Snyder Avenue stores; Mid-Atlantic champions Taney shirts).

2. Mayor Nutter is hosting a Pep Rally in the Courtyard of City Hall at 2:00 pm, followed by a screening of the game on a giant screen! There will be festivities, refreshments, and guests. Bring your kids in their Taney Baseball uniforms, invite your friends, and be sure to wear your Taney gear!

3. New Wave Café (Taney coach and sponsor) is hosting a viewing party (3rd & Catharine). All food and drinks will be at happy hour prices. Family friendly; wear your Taney best!

4. Milkboy (Taney coach and sponsor) is hosting a viewing party (1100 Chestnut Street). Happy hour prices, with 3 televisions downstairs (upstairs will open depending on the number of people).

5. National Museum of American Jewish History is offering FREE admission all day, including their "Chasing Dreams" baseball exhibit. They will screen "The Sandlot" at noon, and they will screen the Taney game at 3:00 pm.

We'll have a game thread up a little before 3pm today. In the meantime, Go Taney!