It's hard to comprehend what Mo'ne Davis has done in back to back games against two dominant offensive teams. 12 innings, 0 runs, 14 strike outs, 5 hits, 3 walks. Amazing.

This is hard to fathom.  I mean, seriously hard to comprehend.

For any of the kids in the Little League World Series, this week has got to be world-rattling.  They are 12 and 13 year olds (some even 11 years old) who are thrust onto the biggest stage of their lives.  Instead of playing games in front of crowds of tens and twenties (all parents, siblings, and grandparents), they are playing in front of crowds that number in the thousands, even tens of thousands.  Instead of playing in anonymity, they are playing on national television.  Instead of the local college player umping, they have real umps at multiple bases using instant replay.

This is a different game, and these kids, just kids, have to rise to the occasion and play the best baseball of their lives.  It's truly incredible and mind-boggling that they can do it.

And then there's Mo'ne Davis.  Because of her excellence on the mound and the fact that she's the first girl to play for a United States team since 2004, she has become the center of everyone's attention.  Magic Johnson is tweeting her.  ESPN is profiling her.  Clayton Kershaw is responding to her pitch-off challenge.  And Jimmy Rollins is giving her a shout-out in the Phillies video tribute to Taney.

The attention has been magnified on this one kid.  So, it wouldn't at all have been surprising if she had suffered from a case of the nerves today.  Or if she just wasn't everything she had been cracked up to be.  Everyone would have understood.  No one would have faulted her.  After all, she's just 13.

But wow - that's not what happened.  Not at all.  After pitching the game of her life Sunday to get Taney to the Little League World Series, all she did was come back and pitch even better today.  Against a South Nashville team that had been clobbering the ball, highlighted by Enos Slaughter's (yes, that Enos Slaughter) grand-nephew at catcher with 3 home runs in the regional championship, Mo'ne Davis pitched a complete game shutout.

Her line was impeccable - 2 hits, 0 walks, 8 strikeouts, 6 innings, 0 runs.  It was about as dominant a performance as you could witness in the Little League World Series.  What made it more amazing was that she got stronger as the game went on.  In the last inning, with a 4-0 lead, she struck out the side. Her fastball was untouchable, and her off-speed pitches were throwing the batters off-balance.  There was nothing they could do against her.

The South Nashville pitcher was no slouch either.  He also had an amazing fastball.  I believe he struck out at least 10 Taney batters, maybe more.  But he made one huge mistake.  In the first inning, he walked the first batter, allowed another base runner on an error, then threw a poorly placed curve to Jared Sprague-Lott, who clobbered it over the left center-field fence.

Taney's first-inning 3-0 lead was all they needed with Mo'ne on the mound.  They tacked on another run in the bottom of the fifth on a sac fly.  That extra run probably helped Mo'ne in the sixth.

Next game - Sunday night against the winner of the New England/Southwest game.  The game will be televised by ESPN2 at 7pm.

Here are a few celebrity tweets from today's game, and a great picture courtesy of philly.com at the end.  Go Taney Dragons!

Go Taney, Go MoNe - how about that! 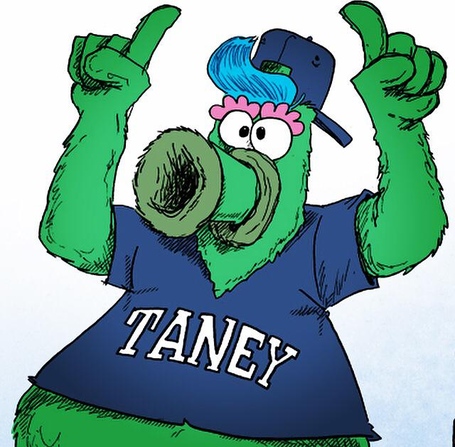