Phillies Stat Notes: How are they playing .500 ball lately?

The Phils are 21-21 dating back to July 7th, and so have slipped to 9th in next year's draft order.

Share All sharing options for: Phillies Stat Notes: How are they playing .500 ball lately? 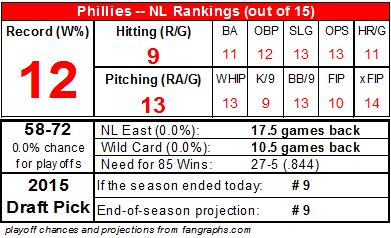 The Nationals have a very strong claim now as the best team in the National League. They have the best record in the league, and are now on a 94-win pace, and their run differential indicates they are even better than that (a 97-win pace). The Nats now have a 99% chance of winning the division, according to fangraphs, leaving Atlanta to battle for a wild card spot. 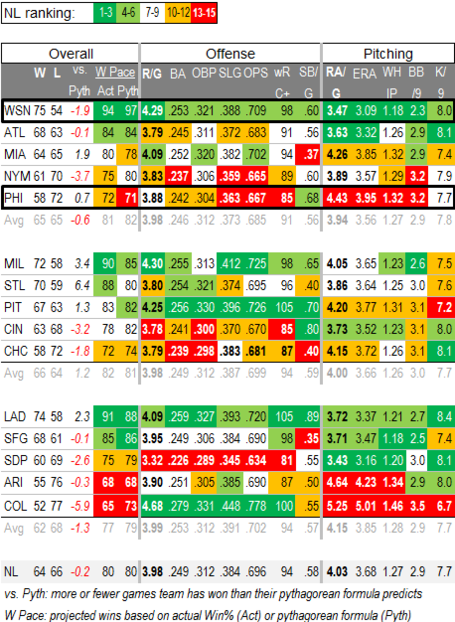 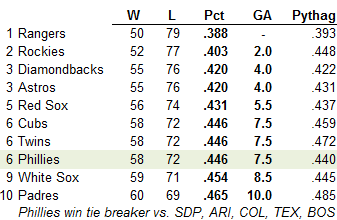 Both the Cubs and Twins had worse 2013 records than the Phils, so they rank higher for purposes of determining the 2015 draft order.

In terms of the 2015 Draft, the Phillies haven't done themselves any favors over the last month and a half. Since July 7th, they've gone 21-21, and gradually drifted down the projected 2015 draft order from 6/7, down to 9.

Why have they been winning more lately? First, we should note there is selection bias in that 42-game window. We start on July 7th to highlight that .500 record, but starting even two games earlier (21-23) or later (19-21) shows how that can quickly change.

Their relative lack of suckiness lately is almost entirely due to their offense, as they've been allowing even more runs than before during this stretch:

Why have they been scoring more? Mainly because they've benefitted from a couple of types of luck in that period:

1) BABIP: More hits are falling in, with their batting average on balls in play rising from .285 through July 6th, to .309 since then.

2) Timing of hits: they've scored more runs than their underlying stats would indicate. While their scoring has jumped from 12th through July 6th, to 4th in the NL since then, wOBA has only moved up slightly, from 14th to 11th, even with the favorable BABIP.

But they've hit .280 with runners in scoring position over those last 42 games, and that has helped to make the most of their still below-average hitting.

3) Timing of runs: as you'll note in the small table above, they're still allowing more runs than they score (4.52 to 4.17), and over a larger sample that kind of run differential would normally translate into a .463 winning percentage -- better, but not quite .500. The favorable sequencing of runs is evident in their record in one-run games: they've won 9 of the 14 one-run games they've been in in this recent stretch (.643 W%), compared to only 12 of 28 through July 6th (.429 W%).

So, in short, while winning about half their games has been a nice break from more consistent losing, we shouldn't expect the recent run of mediocrity to continue.

Phillies Team Stats, vs. 2013 and vs. the Nationals

HITTING
The Phils now lead the NL in taking the first pitch.

They've been the second most successful team in the NL at stealing bases (81%), behind only tonight's opponent (85%). 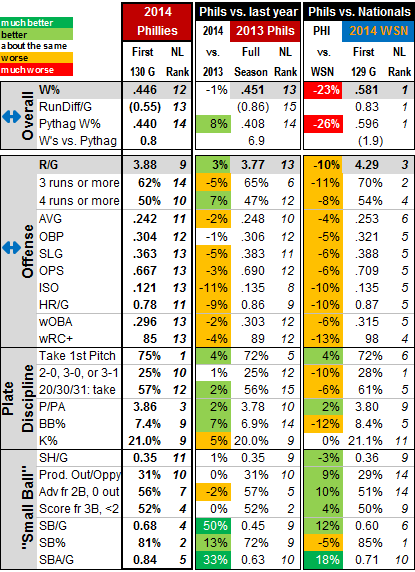 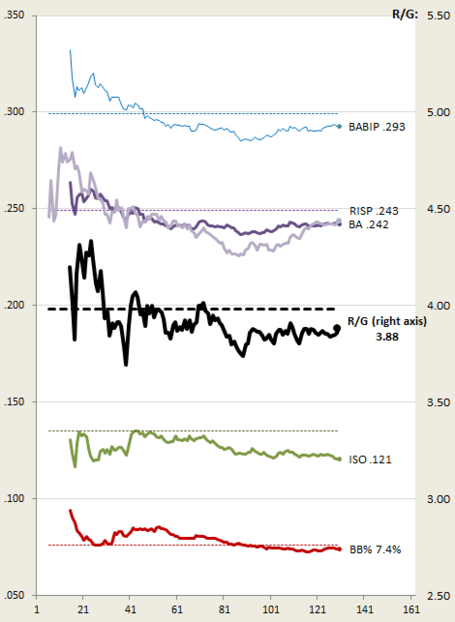 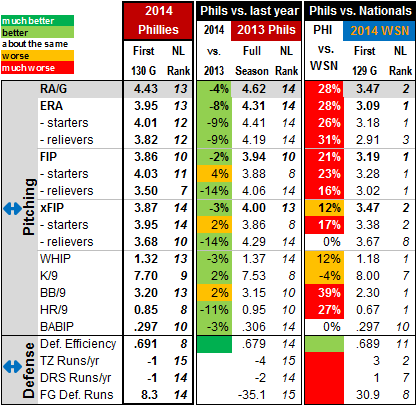 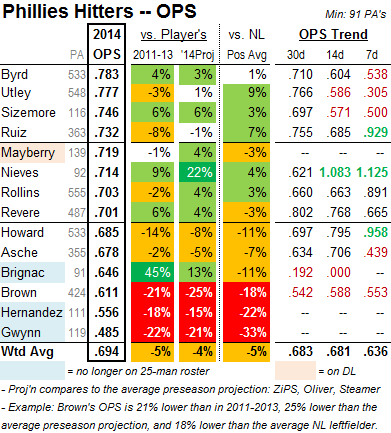 Sizemore started the season hot in Boston, and then really faded, until the Sox finally released him:

He also started hot when the Phillies called him up in July, but has been slumping again recently. Time will tell whether he can return to productive hitting, and that will likely determine how much interest there will be in him during the off-season, both by the Phils and other clubs:

When Dom started hitting a bit at the end of June, there was some hope that he could return to some semblance of past form, even if not the torrid May-June of 2013:

His BABIP jumped from .248 through 6/28, to .356 in his little hot(ter) streak, so that was a warning sign already. But I don't think we could have predicted he'd do this over the last month:

To the many weird aspects of Revere's season, we can add one more: he's on pace for 183 hits, but only 19 RBIs.

Below are the fewest RBIs ever for a player who had 175 or more hits:

Or, looking at it another way, below are the most hits ever by a player with 20 or less RBI:

Utley's walk rate was only 6.8% before the all-star break, pretty far below his 9.6% career rate.

Typically OPS is a decent (and easier to calculate) approximation of hitting value. Correlation between OPS and wOBA for the 414 players who have 90+ PAs this year is 0.995 -- it doesn't get much higher than that. For comparison, the correlation between batting average and wOBA is 0.79, and 0.88 between OBP and wOBA. But there are cases where OPS and wOBA do differ, and Carlos Ruiz is an example where OPS sells him short. While the OPS table above shows Chooch far behind Byrd and Utley among the team's hitting leaders, wOBA and wRC+ show that he has actually been very close to the top so far this year: 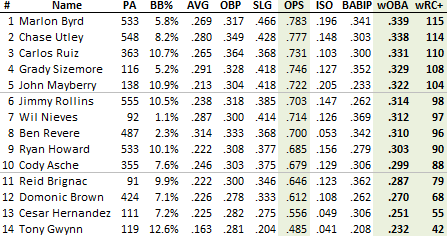 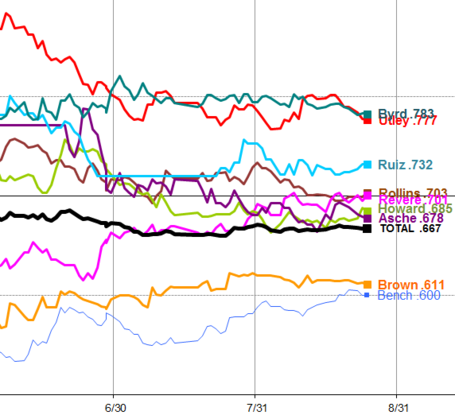 Below is how starters' ERAs have progressed since early May. Hamels has ticked up slightly in his last two starts, but is still in a league of his own on this staff. 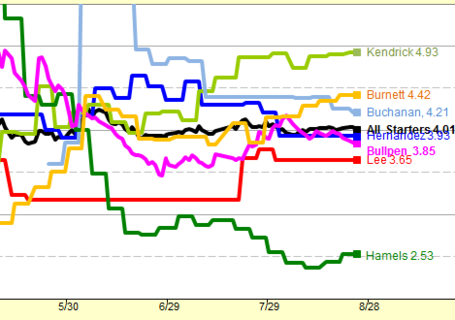 Utley is about to move into the top 10 in Phils history in both at bats and plate appearances: