Today, the city, the Phillies, and everyone in the Delaware Valley says thank you to the Taney Dragons for giving us something the Phillies haven't this year - thrilling baseball.

Share All sharing options for: Phillies and City to Honor Taney Dragons Today

I swear I'll get back to writing about the Phillies soon, but before that happens, I've got one last Taney update for you, as today is the day to honor the team that brought us something our big league team couldn't - thrilling, meaningful August baseball.

Do you have some free time today between 2pm and 4pm and are anywhere near Center City?  Come out and celebrate, as Philadelphia is throwing the Taney Dragons a parade!  Here's the parade route: 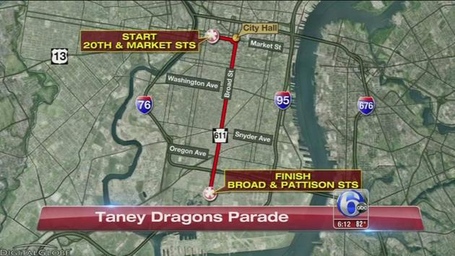 The parade will stop in front of the Kimmel Center for a serenade from the Philly POPS! and at Broad and Washington for a Mummers performance.  There will be a rally and some speakers at the end, in FDR Park.

Later in the evening, the Phillies are honoring Taney in a full-team pre-game ceremony.  Here's the information from a Taney email yesterday, including a link to discounted tickets through the Phillies (with proceeds going to Taney):

What: Tribute to the Taney Dragons, followed by the series finale game between the Phillies and Nationals

Who: Taney Dragons team members, coaches, and families will be the focus of a ballpark-wide celebration

Tickets: Special ticket offer, with Taney Baseball receiving a portion of the proceeds, through phillies.com/Taney

Bonus: All fans in attendance will receive a Taney Dragons t-shirt!

I know that a bunch of my neighborhood associations have been giving out free tickets, provided by the Phillies.  I anticipate that this is going to be a pretty well attended game tonight.  With the Phillies actually playing some good baseball these days, it should be a great night at the park.

Hope to see you there!