Another Cole Hamels gem wasted, as the Phillies were shut out for the second straight game

First, the good news: Cole Hamels. It's probably enough to stop there, because the lefty ace has been a synonym for excellence over the last two months. Since the start of June--probably about when he caught his full rhythm, considering the winter injury that delayed Hamels' spring training for a month--he's put up a 1.46 ERA over 13 starts and 92 2/3 innings, with more strikeouts (95) than hits and walks combined (93).

Sunday was more of the same, as Hamels went seven innings, allowed four hits and a walk, and struck out six on just 86 pitches. But he took the loss, falling to 6-6 on the season, thanks to one unearned run the Nationals scored in the third. Catcher Jose Lobaton reached base on a Cody Asche error, moved to second on Stephen Strasburg's sacrifice, and scored on a Denard Span single.

Of course, against Strasburg with the team playing behind Hamels, that one run felt almost like the 11 they allowed in Saturday's shutout loss. Four times, the Phillies got the potential tying run to second base with two outs; four times they came up empty. The three-hole and cleanup spots remained a void of offense suckage, as Chase Utley took another 0-fer to finish the seven-game road trip 1 for 20 and Ryan Howard did the same to complete the trip with one hit in 25 at-bats. The shutout was the team's 13th on the season; crazier is that today's game was the 30th this season in which the Phillies were held scoreless through six innings.

Any thin hope of a rally went by the boards in the bottom of the eighth, when Ken Giles was charged with three runs after starting the inning with a walk and back to back doubles. 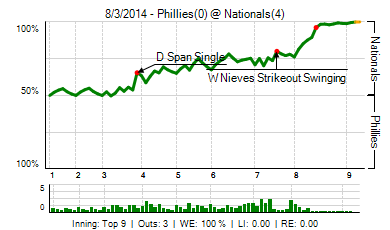