If nothing else, we will suffer no more Phillies-Mets games this season

Awful as they are, there’s a case to be made that the Phillies are a better team than the New York Mets. Outside the season series, the Mets have gone 51-67 in 2014; the Phils’ record against every other team is 56-61. The Mets’ run differential against the other 28 teams is -41; the Phils’ is -36.

Head to head, however, there’s been no comparison: going into Sunday’s contest, the Mets had won 12 of the 18 matchups, frequently in agonizing fashion. The lowlight was a five-game set in Philadelphia over Memorial Day weekend, of which the Mets won four including 14- and 11-inning victories. (The Phils' lone win in that series was also a 14-inning affair, which was only slightly less painful.) So it made perfect masochistic sense not just that the Mets won Sunday, but that they did so in a way that highlighted the worst aspects of this atrocious Phillies team.

Starter A.J. Burnett, originally drafted by the Mets in 1995, took his third loss in four starts against them this season. Burnett actually was cruising through the first 4 2/3 innings, but with two outs in the fifth and a 1-0 lead, he allowed a single, a double and a single to fall behind 2-1. After Ryan Howard tied it in the sixth with his 20th homer of the season--and seventh for his career against New York starter Dillon Gee-- Burnett faltered against the bottom part of the Mets’ order. Wilmer Flores singled to lead off the home sixth, and Burnett walked Dilson Herrera after recording an out. Backup catcher Anthony Recker, the eight-hole hitter who lugged a .185/.221/.322 line into today’s contest, sat on a first pitch fastball and crushed it for a three-run homer.

The Phillies weren’t done. Freddy Galvis pinch-hit for Burnett to lead off the seventh and drew a four-pitch walk to chase Gee. Ben Revere and Jimmy Rollins followed with singles, scoring Galvis and advancing to second and third when Recker couldn’t handle a throw home. But Chase Utley popped up and Howard and Sizemore struck out to end the threat. If you wanted to sum up the season in general and the Phillies-Mets matchup in particular, you could do a lot worse than the within-one-inning confluence of "three-run homer from the Mets’ all-glove/no-hit backup catcher" and "no runs scored from the Phillies’ 3-4-5 hitters after second and third, no outs."

The Phils did pull within a run when Domonic Brown hit a solo shot in the 8th, his fourth hit of the day. But Justin DeFratus gave it right back in the bottom of the inning, and that proved decisive when the visitors mustered one more in the top of the ninth—their fourth straight inning scoring exactly one run. 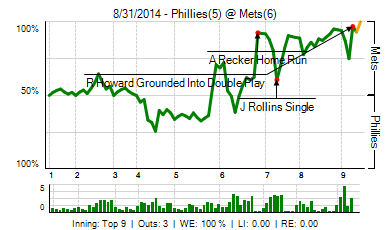