Ryan Howard and the worst 90 RBI seasons in history

Ryan Howard is 7th in the NL in RBIs, and is on pace to drive in over 90 runs for the year. However his season is also on pace to be one of the worst in history with that many RBIs.

Share All sharing options for: Ryan Howard and the worst 90 RBI seasons in history

In spite of that, Howard has managed to drive in 63 runs, good for 7th most in the National League (and tied with Marlon Byrd for the Phillies team lead).

Assuming he gets similar playing time in the balance of the season, Howard is on pace for 91 RBI by the end of the year. That doesn't quite have the ring or cachet as the nice round 100 RBI number, but 90 RBIs would have been an impressive amount for much of baseball history. Tony Perez, for example, is famous for, among other things, driving in 90 runs or more for 11 straight seasons.

How is this possible? Chase Utley, Jimmy Rollins, and Ben Revere have combined for an ok but not great .325 OBP over that time. But as has been the case for much of his career, Howard has hit better with runners in scoring position, largely because opponents don't employ a defensive shift in those situations:

His splits for the full season to date are similar, although his non-RISP numbers are somewhat better thanks to his decent start:

So he has come through in some key situations, although obviously even that .754 OPS is still below par for a first baseman.

But then all those other PAs count too, and as currently projected, Howard's overall final 2014 stats would be among the worst ever for players with 90+ RBIs, whether we measure by wOBA, wRC+, or overall WAR.

There have been 2,722 player seasons with 90 or more RBIs since 1900. The few listed below are the worst of the worst, the pinnacle of driving in a lot of runs, while hurting your team on the field in virtually every other aspect of the game:

In terms of overall hitting, measured by the comprehensive wOBA, Howard's season is on track to be the 3rd worst in history by any player with 90+ RBIs.

The "honor" of the worst goes to third baseman Tony Batista who drove in 99 runs for the 2003 Orioles in spite of hitting only .235/.270/.393. He followed that up with a similar though not quite as bad season in the Expos' last season in Montreal (9th on the list).

When adjusting wOBA for the player's league and park to get wRC+, Batista's 2003 is still the worst 90 RBI season ever, with Howard' 2014 projection coming in in a tie for 12th.

Note that old friend Pedro Feliz is high on the list, with the season that (presumably) was key in the Phillies deciding to sign him as a free agent two years later. 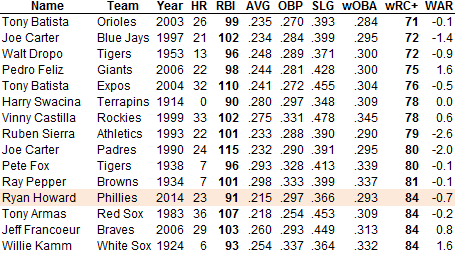 Based on the players' total contributions in a season, as measured by fWAR, Howard is projected to finish with the 10th worst season in history overall by a player with 90 or more RBIs.

Tony Batista's relatively less disastrous -0.1 fWAR in 2003 doesn't make the cut in this view. Instead, leading the way is Ruben Sierra, who combined very bad hitting with -25.0 UZR, his worst of many horrible fielding seasons.

Dante Bichette's 1999 at #2 is a special case. Not only did he have 133 RBIs, by far the most of any season on these lists, but his .298/.354/.541 line is actually very good. However playing in the extreme environment of Coors Field reduces his wRC+ to only league average. But the icing on this cake is the 34 runs below average that Total Zone assigns him in the outfield. He was always a terrible fielder, but never rated as bad as he did that season. 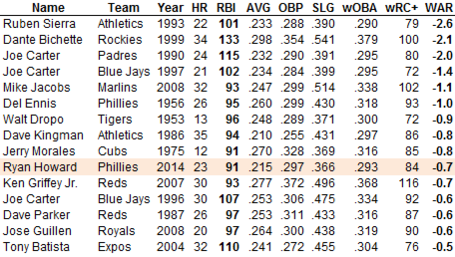 Ryan Howard has come through many times this season and helped the Phillies win some games. However with his complete and utter disappearance when there aren't runners in scoring position (in most cases meaning that the shift is on), it's looking like this will be one of the worst seasons ever by a hitter who manages to drive in a lot of runs.