Rollins, Utley, and Howard have now started more games together at their respective positions than any trio in history, surpassing Bill Russell, Davey Lopes, and Steve Garvey of the 1973-81 Dodgers.

In Tuesday's series opener against the Houston Astros, Jimmy Rollins, Chase Utley, and Ryan Howard started together at first, second, and shortstop for the 887th time.

The old mark for three teammates at those positions was 886 games, by shortstop Bill Russell, second baseman Davey Lopes, and first baseman Steve Garvey of the Dodgers. That trio first started a game together in June 1973, and stayed together through the end of the 1981 season.

Rollins, Utley, and Howard (RUH) first started together in the second game of a twi-night double header, on September 8, 2004. Rollins was wrapping up his 4th season as a starter, Utley was occasionally filling in for Placido Polanco, and Howard was a September call-up after blasting a combined 46 home runs that year in Reading and Scranton.

It has taken them almost 10 full seasons to accumulate those 888 games, one season more than it took the Dodgers. That's mostly because injuries have kept one or two of the three off the field for large chunks of the past few years. The 83 games they've started together so far this year is the most since 2009. The graph below shows the number of games they started together in each year, and it's surprising to see how few there were in 2010-2013: 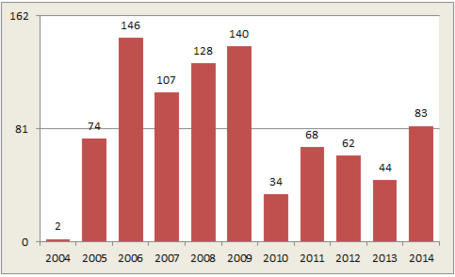 Comparing the two trios, the Phillies had more down years during their run, and so the team W-L% is lower. But they also won more division titles (note, with the strike-prompted split season format in 1981, the Dodgers did win the West for the first half and so advanced to the playoffs, though that's not counted in their three division titles).

They each won one World Series championship. In fact, the last thing that Russell, Lopes, and Garvey (RLG) did together on the field was to hoist the 1981 World Series trophy. They had been to the Series three times already, two of them via heartbreaking defeats of the Phillies in the 1977 and 1978 playoffs that still haunt fans old enough to remember them. But each of those first three times they lost to the AL team, first to the A's in 1974, and then the Yankees in both 1977 and 1978. But in 1981 they finally broke through and beat the Yankees for their only championship.

Individually, RUH have more WAR over those seasons, thanks to both Rollins and Utley:

Hits were similar, but RUH hit more home runs, thanks to Howard, while Lopes led RLG to the higher stolen base total. 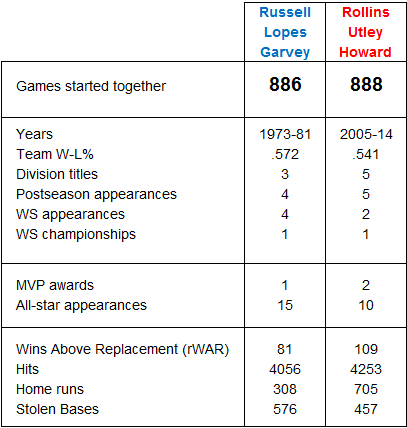 It needs to be said that it's even more impressive that the entire Dodgers infield, including third baseman Ron Cey was together for almost the entire 886 games. Cey-Russell-Lopes-Garvey started together for 833 games from June 1973 through September 1981.

The closest the recent Phillies come to a foursome is by including Carlos Ruiz. Rollins, Utley, Howard, and Ruiz have now started a relatively modest 410 games together since Chooch came up in 2006.
We are most likely looking at the rest of 2014 and all of 2015 for RUH to add to their total games started together.