To Trade or Not To Trade: Mets 5, Phillies 4

Two inexplicably untraded pitchers find themselves stuck in a futile scrum between near replacement-level foes.

Share All sharing options for: To Trade or Not To Trade: Mets 5, Phillies 4

My girlfriend just finished a busy, but good, week at work, so this evening we decided to celebrate like any true Americans would: we ordered pizza from Papa Johns, bought a bottle of New Jersey made wine, and watched some baseball.

We were treated to  Roy Halladay nostalgia complete with images of bobbleheads, strikeouts, and general awesomeness. With the "first pitch," we remembered 2013 Roy Halladay with a nice, looping, 50 mph curveball right down the middle of the plate. Good to see he's still in 2013 form.  A real tear-jerker ensued when Halladay and Ruiz joined in a warm embrace full, we can only presume, of unspoken acknowledgements of days long gone and opportunities not seized. There's no crying in baseball, everyone. Get it together!

Once fans and players alike wiped the tears from their eyes, the game started with little fanfare.

The first excitement came in the form of a Bartolo Colon AB in the top of the third. Colon, predictably, struck out on a swing at a pitch approximately 3.856' off the plate that threw his helmet way off. 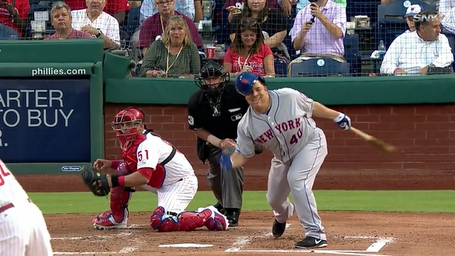 Burnett got into a little bit of trouble after that and found himself with the bases loaded. Luckily Lucas Duda was up and grounded into the Phillies shift (OMG, maybe they're using STATZZZ!) to end the inning.

The bottom of the inning featured Roy Halladay in the booth talking about everything except going to the zoo. He did mention Jamie Moyer asking him out to breakfast back in his playing days. Boy, would I like to go to breakfast with Roy Halladay. Someone should start a blog about that...

(At this point, the Eagles game has started, so no one else is watching. They say no man is an island; I am an island.)

Those who jumped to the Eagles missed out on another half-inning of Roy Halladay. He talked about Twitter, with, disappointingly, no shout-outs to @Phrozen_.

What transpired on the field, in direct opposition to what was happening in the broadcast booth, was a long, painful inning. True to Roy Halladay  night, Travis D'Arnaud scored first on a Juan "Johnny Legs" Legares double, followed by Kirk Nieuwenhuis crossing on a Wilmer "Wilted Flowers" Flores single. (I hope all those first names are right; I made them up) Colon then donated an out to the cause; He'll be writing that off in April. Granderson then singled home Johnny Legs. Daniel "Not David" Murphy then singled home Flowers. David Wright, looking to give back to the community, kindly grounded into a double play to end the inning. Maybe with some support from the fans, that inning wouldn't have happened.

Utley singled to lead off the bottom of the 4th in an attempt to cut into the deficit. Howard and Byrd both hit deep to centerfield, but Johnny Legs was able to catch them. Sizemore hit another flyball to right. Same result. Utley's efforts were for naught. End of inning.

Jim Thome then joined the booth. The man is a goddamn American treasure. Those who jumped ship for the Eagles game missed out; I'll stay here with Jim F'ing Thome. We talked about fishing (I don't fish, but pretended to care for Jim's benefit) and hitting massive dingers (something I have no experience in, so I'll shut up and listen). Meanwhile, Roy Halladay night continued with with Travis "1/3 Roy Halladay" D'Arnaud launching a solo HR. The inning ended somehow.

Burnett exited after 6 innings, somehow amassing 8 strikeouts over that span. Three of them were Bartolo Colon though, so that helped. Antonio Bastardo entered in the 7th and made it through clean, giving up no hits or walks and striking out one.

Going into the bottom of the 7th Google Chrome decided to revolt against the Phillies, so I missed a home run from the still-untraded Marlon Byrd. Sources have confirmed it actually happened. That was it for the Phillies in that inning. Colon has only thrown 89 pitches at this point. Way to work the pitcher, Phillies.

Justin DeFratus came in for the 8th. After two unspectacular outs, Bartolo Colon took a 4th at bat and delivered a literally spectacular out, looking at a pitch right down the middle. The Phillies have done well to allow Colon to take 4 ABs as they are the highest form of baseball entertainment.

In the bottom of the inning, Ryne Sandberg let Dom Brown out of timeout to take an at bat only to become the latest victim of Bartolo Colon's insatiable appetite for outs. Revere then corkscrewed himself into the ground on a strikeout that must have been a Bartolo Colon impersonation. Well played, Ben Revere.

Cesar Jimenez came in for the 9th and, despite not being particularly good, retired the heart of the Mets order with little trouble. Mets might want to work on the heart of that order.

The Phillies tried to make the game watchable in the 9th. Dana Eveland came in to close it out for the Mets. Chase Utley led off and hit double off Dana, The Male. The Male Dana then walked Ryan Howard, leading Terry Collins to call on his big bad closer Jenrry Mejia to quell the Phillies rally. Marlon Byrd was as impressed by Mejia as he was traded (which is to say, not at all) and singled to load the bases. Then Franchise Cornerstone Grady Sizemore was even less impressed by Mejia and doubled to right, scoring Utley and Howard. Mejia, now faced with a save-worthy run differential, found his closer mentality. He got Ruiz to fly out to shallow right. Then Asche grounded out, allowing Byrd to score, but moving the Phillies a Reid Brignac out away from a loss. Brignac, recently summoned from the bench, apparently hadn't warmed up properly and didn't swing the bat so as to not risk injury. Poor choice, as he struck out looking.

Fangraphs of hernias and unexecuted trades: