Jonathan Papelbon has never been a very popular athlete in Philadelphia. And that was BEFORE yesterday's crotch-grabbing episode.

Jonathan Papelbon blew a save in a big way on Sunday. Then, he blew his cool leaving the mound.

After entering the ninth with a 4-1 lead against the Marlins, Papelbon imploded, giving up four runs on four hits and a walk. The Phils did not score in the bottom of the inning, sending the Marlins home with a 5-4 victory.

In the grand scheme of things, losing a late-September game to Miami doesn't mean anything. Papelbon grabbing his crotch at the booing public, then getting tossed from the game by "Cowboy" Joe West is what's grabbing the headlines.

Papelbon said he wasn't making an obscene gesture at the fans. West saw it differently. Here's the photographic and video evidence.

We report, you decide. 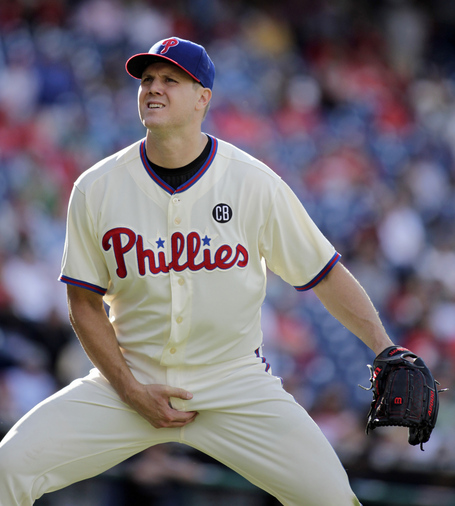 Papelbon then went off on West, with some pushing and shoving between the two "gentlemen of the game" commencing.

Geez, Joe West or Jonathan Papelbon. Who do you root for in that one?

Of course, the fans were ridiculous and in the wrong to boo Papelbon. Yes, it drives everyone nuts that the Phillies closer makes $13 million a year. But in between his blown save yesterday and his meltdown in Texas on the season's second day, Paps has been terrific, with an ERA of 1.16, 37 saves, and just two blown saves between those two events.

Even with his ninth-inning implosion yesterday, his ERA this season is still 2.10, with a FIP of 2.56 and an fWAR of 1.7 (tied for 6th-best in the NL). His bWAR heading into Sunday was 3.2, which was actually tops in the National League.

That's right. According to Baseball Reference, going into Sunday, Papelbon had a higher bWAR than Craig Kimbrel and Aroldis Chapman.

Maybe that speaks more for bWAR's use of ERA rather than FIP to generate their WAR totals, but still. He's been extremely good this year.

Yes, his velocity is not what it used be, and his FIP and xFIP indicate that his ERA should be higher than it is. But at some point, doesn't one have to accept the fact that a pitcher may have learned how to pitch effectively with diminished stuff?

It's important to consider peripheral numbers when evaluating athletes, especially young players, for the purposes of projection and analysis. But sometimes we get lost in the peripherals and ignore actual results.

Obviously, Phils fans simply don't like the guy, and it's hard to blame them. A lot of it has to do with past statements in which he famously said he "didn't come here for this." He's also done and said a bunch of other boneheaded things over the last three years that have rankled fans. There's no doubt he has a huge personality, and sometimes it rubs a lot of people the wrong way.

But there's no denying that Papelbon has been one of the best closers in the National League and probably should have been afforded some slack from the fans yesterday. For his part, Jonathan said he wasn't even making an obscene gesture.

"[West] basically came over and said that I did an inappropriate gesture and I had no clue what he was talking about," the closer insisted after the Phillies' 5-4 loss. "That's when I got upset because I had no idea what he was talking about. I had no explanation. I was still obviously pretty heated from what had just transpired. You know, me and Joe, we go way back and we don't see eye to eye a lot of times."

If you believe all that, I'd like to speak to you about a fantastic timeshare opportunity in the Jacksonville area.

Of course, this incident won't help the Phils' efforts to trade him this off-season. There were already worries by teams about his character, and this certainly doesn't quell those concerns. If Papelbon is unhappy in Philadelphia, he sure isn't doing much to see that he can be sent somewhere else.

So unless the Phils decide to release him or demote him, get used to Jonathan Papelbon, guys. Get used to the crotch-grabbing, man-boob-clutching closer who actually does a pretty good job at closing games down.