Phillies Stat Notes: A top ten pick, and Dom Brown back to so-so

The Phils are still tracking to the 10th pick in the 2015 draft. Dom Brown has been the team's second best hitter since late June.

Share All sharing options for: Phillies Stat Notes: A top ten pick, and Dom Brown back to so-so 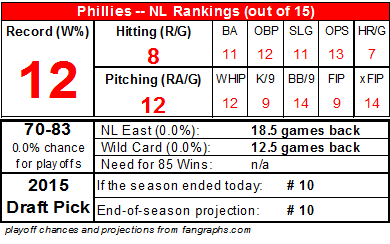 The Phillies are three games behind the Mets with nine to play, so last place is looking more certain by the day.

Meanwhile, the A's are reeling, having lost 15 of their last 20. They're still holding on to the second wildcard spot, but with only a 1-game lead over Seattle. 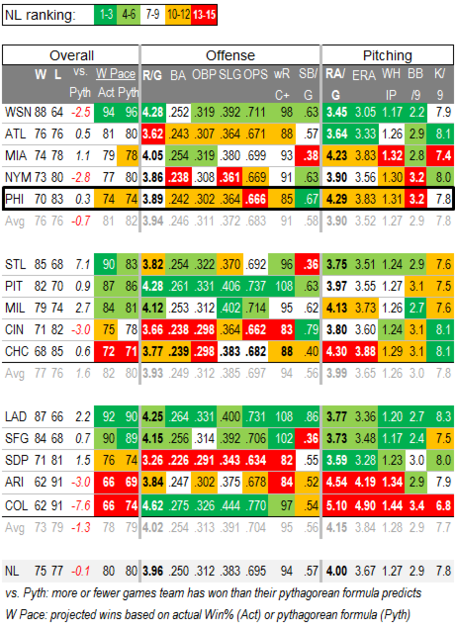 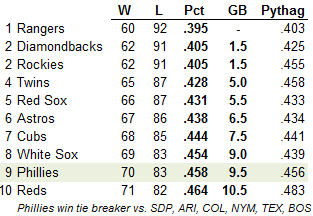 The Phillies have three position players with at least 3 fWAR (Rollins, Utley, Ruiz). The A's have only one (Josh Donaldson, 6.2). Where the Phils fall short is after those first 3.

Each team has 20 position players with 40+ PAs: 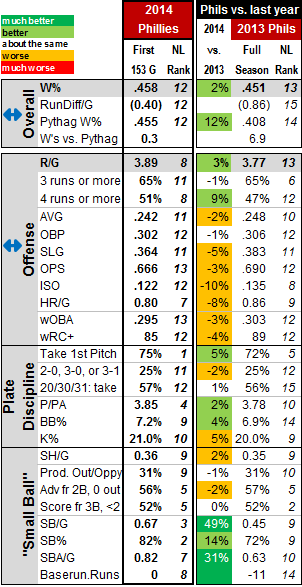 (dotted lines represent the NL average for each) 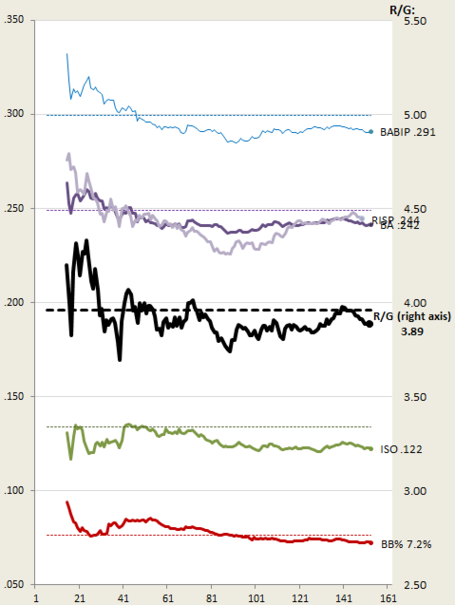 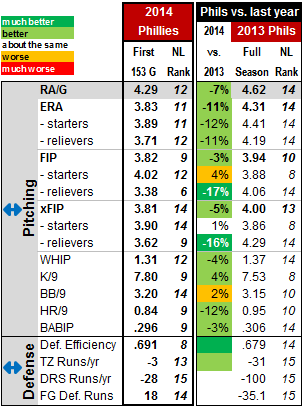 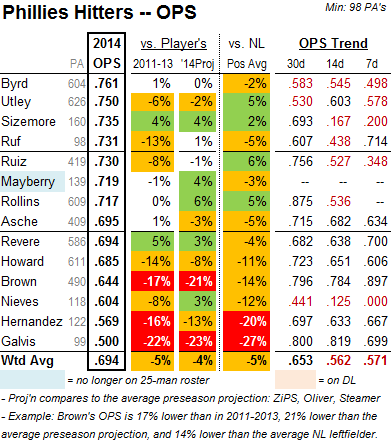 OPS progression throughout the season: 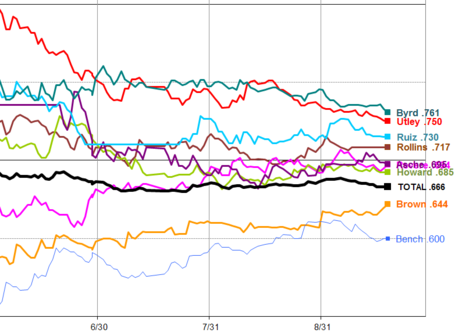 Dom Brown has been the team's second best hitter over that period (selected to make Brown look as good as possible), though that probably says less about Brown himself than the lack of any very good hitters in these last almost three months.

Former Phillies born on this date:
- Joe Morgan is 71
- Chris Short would have been 77, but passed away in 1991 after being hospitalized for almost three years with complications from a brain aneurysm - SABR bio.
- Nick Etten would have been 101. Etten was a first baseman on the 1941-42 Phillies, but later, with the '44 Yankees, he led the AL in home runs with only 22, the lowest leading total for a full-season since Hack Wilson's 21 in 1926.

Also on this date:

1959: Richie Ashburn's seventh-inning single is his 2,212nd with the club, setting a new team record.
[Ashburn would only play six more games with the Phillies after breaking Ed Delahanty's team hits record. He was traded to the Cubs in the off-season for pitcher John Buzhardt and infielder Alvin Dark.]
1964: Los Angeles beats the Phillies with two out in the bottom of the 16th inning, when Willie Davis singles, steals second, goes to third on a wild pitch, then steals home.

1983: Joe Morgan's home run in the 8th seals a win against the Cardinals. He also went deep in the 4th inning, giving him two on his 40th birthday.
2005: Jimmy Rollins appears on the cover of Sports Illustrated, along with Eagles Donovan McNabb and Terrell Owens (cover date 9/26)

Coincidentally, only months after acquiring Al Dark, the Phillies traded him in June 1960 for the other Joe Morgan.

Odd and interesting events on this date in Phillies history: broadandpattison.com