I spent an afternoon at Citizens Bank Park recently with my sons, and we did an important cutting-edge and ground-breaking empirical study into fan jerseys. Here's what we found.

Share All sharing options for: Fun With Phillies Fan Jerseys at CBP

It's been over a week since the Phillies played at home and will be a few more days before they do again.  The last game they played at Citizens Bank Park was now-infamous Papelcrotchgate, in which, in case you forgot what happened in the actual game, the Phillies lost 5-4 after entering the 9th inning leading 4-1.

I was at the game (though had to leave early so I thankfully missed the ending).  It was a gorgeous September day, a perfect day for baseball, even Phillies 2014 baseball.  If there were days that were envisioned as ideal for Citizens Bank Park when it was constructed, this was it.

I was with my family, including my two sons.  They're into baseball, though they're still young.  For all you parents out there, you know what that means - you don't get to enjoy the game the way you might otherwise.  This is why, for those of you without kids (or without an appetite), the stadium has a playground, funnel cake, plastic red hats with softserve ice cream, games on Phanavision between innings, and even the Phanatic.  Kids have an attention span that matches Ben Revere's plate discipline.

Last Sunday, my two sons and I came up with a good way to pass some time during the game.  We were sitting in the Hall of Fame Club just to the third-base side of home plate.  (Yes, same spot I was sitting during "the catch.")  We were in the first row of our section, which gave us an excellent view of the sections below (the Diamond Club seats).  As usual, we noticed a large number of fans wearing Phillies jerseys and shirts with players' numbers and names on the back, so we figured we'd do an experiment - see which Phillies player was most represented in the sections below us.

So here you have it - the results of the all-important small-sample-size statistically-non-representative Cohen Family CBP Phillies Jersey Census.  These results are available here only and for the first time ever.  Keep in mind that by reading this post, you are experiencing history.

But first, here's a clip of the CBP seating chart so you can see where exactly we were surveying.  We were in the first row of section 225, which gave us an excellent view of Sections A, B, C, and D below (127 through 124 were out of the question as they are mostly under the Hall of Fame Club overhang).  So those are the four sections represented in this census. 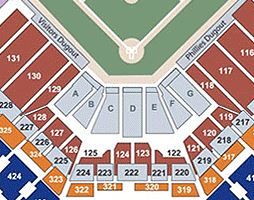 Let's get straight to the results then.  I'll group them into three categories: current Phillies, recent (but non-current Phillies), and the 1980 team.

First, here are the rankings for current Phillies:

Chase Utley is the clear winner here.  I can't say that's surprising at all, as we all know he a fan favorite.  In fact, much of the rest of the chart doesn't surprise me, including the lone Phanatic jersey at the bottom.  Two things do stand out though.

I am quite surprised at how low Utley's double-play partner is in the ranking.  Jimmy Rollins only had 2 people with his name and number (4 if you count my two kids, as the picture up top indicates).  Given that Rollins is the best shortstop ever in this franchise's history, he has been here so long, has been completely loyal to the team, and has been excellent with fans, this was very surprising.

I was also quite surprised that 3 people had bought shirts or jerseys with Papelbon's name and number on them.  Maybe his family was scattered in these sections?  Who else would wear one of those?  I guess they got what they deserved later in the game, so there's at least comfort in that.

The man, the myth, the legend dominates this list.  A perfect game and playoff no-hitter will do that.  Victorino and his exuberance are not a surprise second.  The big surprise though is that someone bought a Kevin Frandsen jersey and still wears it to games.  I would have thought, before last Sunday, that a Frandsen jersey would have been a prime candidate for a "Who Would Buy That?" column.  I guess I was wrong.

Finally, here's the list that made me nostalgic and happy:

The 1980 team was well represented here.  The team's best starting pitcher, best reliever, and 3/5 of its starting infield - that's pretty good for jerseys worn at a game 34 years later.  What made me particularly happy about this list was what was missing - Larry Bowa.  Yeah, I loved him as a player back then, but I was 8.  Now, well, if I never see his name or number again in Philadelphia, I'll be quite happy.

Notably also missing from this survey were any players from the 1993 team.  That was probably the most surprising part of this survey given the emotional pull that team has on this franchise.  I can't say I was too upset about that either, but I would have thought a Daulton, Kruk, or Schilling jersey would have made an appearance.

So there you have it - a bullet-proof study of Phillies' jersey popularity.

And further evidence that Utley and Halladay reign supreme.