On Never Ever Leaving: Scott Rolen, Kashmir, and the Phillies

How an Era, an Heir Apparent, a Mindset and a Desert Song Desperately Haunt the Phillies

Share All sharing options for: On Never Ever Leaving: Scott Rolen, Kashmir, and the Phillies

"The whole inspiration came from the fact that the road went on and on and on. It was a single-track road which neatly cut through the desert. Two miles to the East and West were ridges of sandrock. It basically looked like you were driving down a channel, this dilapidated road, and there was seemingly no end to it."

Phillies fans know the riff well, and only the most casual don't thrill to it ever-so-slightly, feel the small hairs on the scruffs of their neck and forearms - and Lord knows where else, depending on your admiration for the man -  tingle a bit when the first notes thud through the loudspeakers at Citizens Bank Park, and Phillies announcer Dan Baker says, "Now batting...number 26, second baseman. Chase! Utley!" Even now, though he is past his prime, Utley is a joy to watch, progressing as he must from team stalwart to bronze statue sometime in the future. But this is not about Utley; though he is a man of few words, there is an implacable Sphinx-like quality to him; he has been adamant about forcing us to return, with every home at bat, to the strains of a 40-year-old song, and he does not intend to change it, ever: 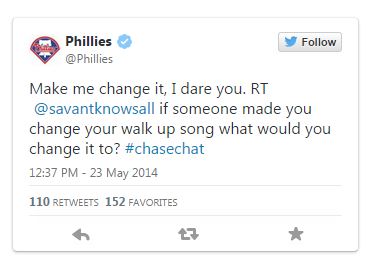 I imagine Utley to be the loneliest man in the Phillies clubhouse these days, a keen an veteran observer of all that once was going ever so gradually awry, baseball's version of the grizzled veteran Kat in All Quiet on the Western Front. That he demurs on explaining or changing his musical selection may be just because well, he's an athlete and just thinks it's a rocking good song from the late 1970s. But maybe those still waters run deep. Consider:

Oh let the sun beat down upon my face, stars to fill my dream
I am a traveler of both time and space, to be where I have been
To sit with elders of the gentle race, this world has seldom seen
They talk of days for which they sit and wait and all will be revealed
Talk and song from tongues of lilting grace, whose sounds caress my ear
But not a word I heard could I relate, the story was quite clear

This man, born at the zenith of the Phillies' late-20th century ascendance into perennial playoff contenders, hearkens us back into that crazy first era of major sports team ascendancy and championships and personality DJs battling it out for morning show ratings on WMMR and WYSP's classic rock formats in the Philadelphia air, air also filled with the mad scrambles to the suburbs, leaving a kind of desperate low-grade fever of a recession by the early 1980s that the city never really has broken. 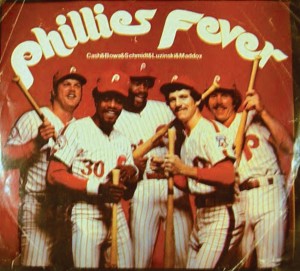 It is 2014, and remarkable not how so much has changed in the background of the lives of Philadelphia and its Phillies, but how much has remained implacably the same. No, not about its wins and losses, or new stadiums, or the Center City skyline, but behind that, like the soundtrack and the DJs who play it, the songs really remain the same. Bill Giles is still around. Dallas Green: still around. Larry Bowa: still around. Schmidt, Luzinski: still around. An organization that prides itself on loyalty to the point where its culture reeks of insularity. Had science somehow been able to intervene, as God is my witness Paul Owens would still be the G.M. of this club, and but for a small minority of circle-jerking baseball math freaks and poets on the Internet, we would all be just fine with that, because that same science would have kept Harry Kalas and Whitey in the booth too, and that's a pretty damn good trade, all things considered.

And Utley has seen all that, alone in his video-analytic lair that few of his teammates seem to really have much need for, and now sees his own era crumbling, and watches former doormats employ their own newfangled methods to grind the grizzled old Phillies into the sandtraps of the offseason.

Oh, I been flying... mama, there ain't no denyin'
I've been flying, ain't no denyin', no denyin'
All I see turns to brown, as the sun burns the ground
And my eyes fill with sand, as I scan this wasted land
Trying to find, trying to find where I've been.
Oh, pilot of the storm who leaves no trace, like thoughts inside a dream
Heed the path that led me to that place, yellow desert stream
My Shangri-La beneath the summer moon, I will return again
Sure as the dust that floats high in June, when movin' through Kashmir.
Oh, father of the four winds, fill my sails, across the sea of years
With no provision but an open face, along the straits of fear

It is past time, it has always been time, to reveal this catchy little zeitgeist as the fraud it is. No, not of the felonious sort that brays on Twitter in a freakish sideshow, but at its base level: intellectually, what should be of worth in its design and execution is not at all what it seems. "Kashmir" itself, paints a picture that was inspired in this southern Moroccan landscape:

Though the title of the song points us to a land that looks more like this: 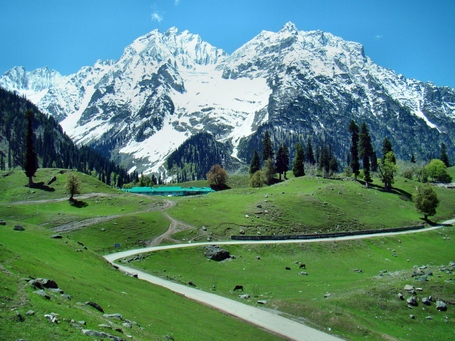 And so it is with the Phillies. As the classic rock stations gradually tip in songs recorded after, say, 1990, so too do the Phillies dabble in sabremetrics. The straits of fear, indeed, hold them back, of that I am convinced, so we get undisruptive tacks into increasing headwinds. And though their pockets appear to be stuffed with the cable-televised cash of a generation, two disquieting thoughts emerge: 1) it takes a lot of money to journey to either one of the places pictured above, and they're both dangerous: and 2) cable television is probably in a lot of long-term trouble.

Whither, then, Scott Rolen? In the deepest desert of those past forty years, he alone emerged, like a cave-dwelling prophet of What Should Be, alone among the Desi Relafords and Greg Jeffries and Carlton Loewers as a player with talent. And Rolen, the one home-grown, genuine talent in that Decade of Dyspepsia, was left to bake and flop around in a crumbling stadium with a crummy team and learn how to be a malcontent, and even that's up for some debate. The line at the time was that the Phillies couldn't afford him, but that wasn't true. They came around, at last, with the money to spend on him, but it was too late, and they were wrong because it was only part of the point, and he was right, and the were the kinds of wrong and rights it was painful to live through and still painful to revisit, though success of the 2007-2011 era masked it somewhat. Still: it returns these sullen days, like the opioid that has worn off in the wee small hours of a postoperative biopsy whose results we really dread. Morning won't come soon.

Rolen represented a disruptive force, the punk band come to play for a new audience, and yet was shouted down and shunted away in Philadelphia by its tiresome Baby Boomer big brothers who just weren't ready for him when he was here. So I wish him a happy retirement, and am thankful he played here, and perhaps even more thankful that the years have been kind enough to forget a lot of that bad ugliness surrounding him and his departure from Philadelphia, though the pang of the Infield That Might Have Been in the past decade rankles and stings. In 2018 they'll all come back for a cermony, and I'll clap politely for the memory of the defensive prowess of Pedro Feliz. It should be Rolen.

We might wish to believe that things are different in Philadelphia, but I'm not sure of that. I'm sure the song remains the same. 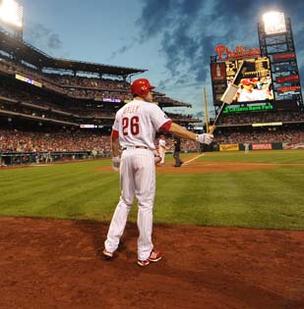