Scott Rolen as Absence Itself

Most of you probably remember Scott Rolen the Philadelphia Phillies ballplayer. In my life his ballplaying stretches away until it is just out of my reach.

Share All sharing options for: Scott Rolen as Absence Itself

My friends, we are strange and wondrous animals. Today we are celebrating an absence. Indeed, this absence we have abided since 2002, well over a decade, when Scott Rolen was traded to St. Louis. After we watched a nearly unprecedented run of success for our team (and the subsequent decline), Scott Rolen hardly stalks us like Marley stalked Scrooge. He's no ghosted former partner conjuring what might have been and what could yet be. When we imagine the Phillies infield if Rolen had never left, we engage in a greedy fantasy-we decline to wonder how that decision would ramify-rather than a sober-minded assessment of alternative paths and demystified counterfactuals. Nevertheless, Rolen haunts us. He departed unwelcome, blossomed into a World Series champion and super-star elsewhere, and closed his career, having written a serious petition for the Hall of Fame. His absence has been long and eventful, begetting longing. And we note his absence, the presence of his non-being, for the shape it cuts from our own biographies. Only self-conscious creatures like us can recognize non-being and live our lives in light of its darkness. With ghosts such as Rolen, non-being coalesces into a symbol, ambiguous due to its general accessibility to any biography but sharp in each of them. What follows is just one disambiguation of Rolen's ghost.

I grew up expecting the Phillies to lose but loving the team and idolizing the players. Born just as the Phillies began wandering through the desert, I latched onto the core of the stumbling early ‘90s teams: Lenny Dystrak, John Kruk, Darren Daulton, Terry Mulholland. When I started playing baseball, these are players I imitated. I slapped my leg when I delivered the ball to the plate and I stood straight up with the bat far above my head when I waited for the pitcher's delivery, at least in the backyard. But, ultimately, as a serious young player perennially undersized but quick, I modeled my game after Dykstra. He couldn't hit for much power (until, well, I'll let you fill in this blank), but he walked, stole bases, dove for flyballs, and generally got dirty as much as possible. So that's what I tried to do. I wanted to be pesky and willing to do what others weren't because I knew that my chances to keep up with the big kids were otherwise slim. In a strange way, I identified my own struggles to get recognized for my baseball play with the early ‘90s Phillies struggle to win more ballgames that they lost. I never noticed that the team lacked blue-chip talent-baseball's natural aristocracy-on both sides of the ball. So, a few years later and after a series of hopeless seasons without the core I loved, when I heard that the Phillies were going to bring up the messiah of Philadelphia baseball, the very possibility was a revelation.

Unfortunately, by the time Scott Rolen reached the Phillies I had already started moving away from the game. His rookie year was my freshman year in high school. When I entered I didn't yet know I would only play one more year of baseball. By the beginning of my sophomore year I would finally realize my only athletic future was in soccer, start pursuing music seriously, and get much more distracted by girls. Aside from watching games while doing homework and attending a few games every year, my closest connection to the game became trying to design a program to simulate games, based loosely on the APBA card and dice based game. I no longer poured over box scores while I ate my breakfast. I no longer purchased baseball cards and the cards I had moved gradually from a prominent place in my room to my parent's attic. And I no longer read baseball weekly from front page to back. When I went to college and discovered philosophy, I let baseball sink back into the haze of my past identity. I couldn't tell the story of my life without baseball but I stopped projecting that narrative. Baseball, like my cards, gradually absented itself from my life as Scott Rolen grew into the hype the media generated around him.

As a result, I remember very little about Scott Rolen. I remember his swing, his broad shoulders rotating as his torso torqued and whipped the bat flat through the zone. But I don't remember any particular home run, line drive, or at bat. I can imagine him preparing at third base before the pitch, but I cannot tell if my memory is accurate. Was Rolen a stand-up style defender or a croucher? Was his glove on the ground or up by his knee? I have an image but I don't trust it to answer these questions. For me, the name Scott Rolen has always conjured mere representations, a concept of a great player but not the concrete excretion of his talent on the field. 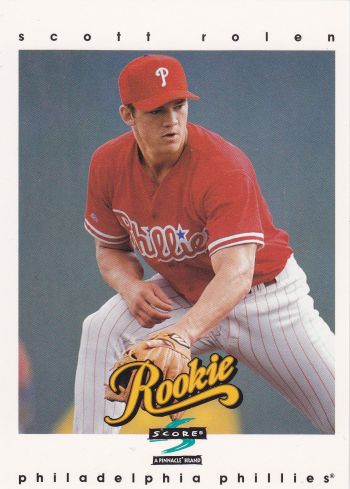 After college, in the middle of the last decade, I found myself cast out of my intellectual community and at sea for a new one. I then returned to baseball and the Phillies especially. I fell in love with Utley and eventually Chooch. Mike Lieberthal provided some connection to the team I used to know. And I started studying the game like I never had before. But by the time I returned Rolen was gone, had appeared in a World Series, and was about to win one. I, of course, was aware that he had been traded away. I also knew that he'd become something of a target for the fans' ire, another tile in a sad mosaic of so many great Philly athletes. But my wayward sail away from and then back to the game left me without anything of Rolen to genuinely call my own. He would always remain an unfamiliar friend or a familiar stranger.

Lacking concrete memories of Rolen but knowing his significance, I have unwittingly condensed Rolen into a symbol. Emptied of baseball performances, "Rolen" instead marks my own absence from the game. With respect to baseball he is my own non-being. He is something I missed, a reason I should never have left-he confronts me with negation, a power I undergo. I chose many paths that took me away from baseball, although I never realized they would. I found myself lost and made my way back, regretting my lack of foresight. I negate even when I do not mean to. Negation is an invisible power for the most part. But Scott Rolen makes it visible to me. Appropriately for this day, he symbolizes absence. He grants me conscious access to a part of myself I might otherwise pridefully ignore. May he enjoy his life away from baseball and return to it-albeit in another form-should he too find himself lost and in need of a familiar community.