Major events on a large scale create shared experiences for a group of people. My father has a vivid recollection of where he was when President Kennedy was assassinated and when man walked on the moon. Nearly everyone in America (and around the world) can recall minute details of our lives from September 11th, 2001.

Sports, while not on the same scale of importance as the aforementioned events, can achieve the same results. Seven years ago today, the Philadelphia Phillies became the 2008 World Champions of Baseball. This fact is abundantly clear across most of the social media channels that I inhabit. Ask any Philadelphian, baseball fan or otherwise, what they were doing 7 years ago and they will most likely be able to give you an incredibly detailed answer. I am no different.

I was eating Mac n Cheese and playing Super Mario Galaxy in the apartment of a boy I liked, and I could not have cared less about what was going on at Citizens Bank Park that night.

It’s not as if I wasn’t exposed to baseball growing up, of course. My parents are both big Phillies fans, and there were many occasions in my very early years that they tried to get me into sports. They took me to a number of games, decorated my room with wallpaper that bore athletic equipment and encouraged me to play any or all sports that I had the opportunity to.

Their biggest success was when they managed to get me to play basketball when I was 8 years old. I played for a season and was apparently a good defender but bad at everything else. The most relevant aspect of my time as a player was that I hated it.

Being around other athletic kids or people who liked sports in general, I always felt disconnected and unwelcome. This is likely due to the fact that I was aware from a very young age that I liked boys, and my survival instinct told me to avoid those spaces. I didn't want to risk the prospect of being bullied or otherwise being made severely uncomfortable.

This mindset prevented me from not only playing but also taking any interest, as I didn't perceive myself as a part of the intended audience. I'm sad to say that I never truly gave it a chance.

Recognizing that getting me involved with any game without protest, spectator or otherwise, was likely a lost cause, my parents decided to stop pushing sports on me. I eventually found friends who had a similar disinterest in athletics (which is super easy to do at an arts high school), and that was that, really.

Ironically, the first baseball game I ever paid any amount of attention to was the 2008 All Star Game. My father and I had just had a huge fight and we hadn't been speaking for several hours. For the life of me I can’t remember what the fight was about, but it wasn't exactly an uncommon occurrence during that summer of being an 18 year old. I sulked around for a bit before eventually getting over it and decided that I wanted to extend an olive branch.

Given the stubbornness that runs in my family, I didn't exactly want to do this verbally, so instead I plopped down wordlessly next to him in front of the TV while the game was on. He recognized that me watching a game with him voluntarily was a peace offering.

We sat there for a while, both watching the game. Eventually I began asking him what was going on. Why is that a strike? Why is he out when this happens but not when that happens? Is there a point at which a game ends in a tie?

I could tell that this was definitely a welcome development. (Later on, he would tell me that he doesn’t really care for the All Star Game and was about to turn it off, but was too excited to after I started watching). As we sat there and watched the game play out, extending to inning 15, I realized baseball could be fun. I even vividly recall making fun of Dan Uggla's name and on-field abilities.

After that, my parents excitedly began engaging me on how the Phillies were doing. I would politely acknowledge when they updated me on the NL East standings, but it was never more than a passing thought. "Oh that's neat," I would say. Even when they got into the postseason. I might have watched one game, but that's all. I was busy with adjusting to college life and dealing with a particularly embarrassing crush.

Going back to that night... all of a sudden, everything exploded. People were running up and down the hallways screaming, banging on the floors and walls. The courtyards filled with people and the road was full of cars blaring their horns. My friends rolled their eyes and regarded the noise as an inconvenience, speaking derisively of obnoxious sports mania. A year or so prior, I would have been an active participant in that conversation. But I didn't really say anything. Then my phone rang.

"I bet you're pretty happy right now" I said as I picked up the phone, not giving my mother a chance to say anything. She was crying.

"Do you know how long we've waited for this?" She asked, rhetorically. We bantered back and forth for a bit, discussed the significance of the evening, then she put my dad on.

"I need you to do something for me, bud."

In 2005, my father suffered a stroke and was paralyzed on his right side. We were very lucky that he made it out of the ordeal with his mind intact and the (albeit limited) ability to move his body, but he won't be able to get very far without the assistance of a cane or a wheelchair.

"I need you to take your mom to the parade, because I can't."

Well, I couldn’t really say no to that, right? I was a little annoyed because it took place on Halloween and that would mean I’d miss some of the daytime festivities that my friends had planned. But I pride myself on being a good son, so we went. 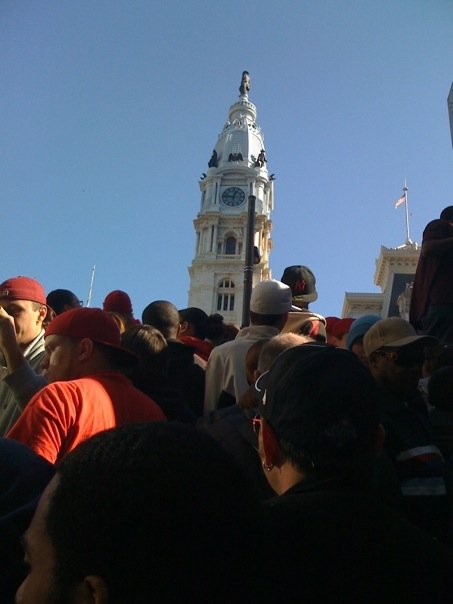 Walking up the stairs at 15th St Station among throngs of people decked out in red and white, with confetti swimming through the air in the shadow of City Hall, the hair on the back of my neck stood at full attention. Something in my brain started to click. It was like I stepped into a completely different world. Strangers were high fiving each other, everyone had a smile on their face. It was insane.

On our way home, I sat with my mother on the El, deep in thought. I came to the realization that I desperately wanted to experience the joy that these people were experiencing. I had never seen so many people, so many happy people, in one place in all my life. It was intoxicating.

I paid more attention the next year.

I watched maybe a handful of games here and there during the 2009 season. I still didn't exactly understand everything that was going on, but I would never have told anyone that. I was extremely self conscious of my status as a bandwagoner. I avoided all talk of baseball for fear that conversation would give away the fact that I was clueless about it.

And of course, things heated up in October. They did it. They actually made it to the World Series for the second year in a row. Does that happen often? A quick google search told me not really. But who were they going to face?

I had my answer. Baseball's biggest villains and, coincidentally, a team hailing from Philadelphia’s greatest rival city. The New York Yankees.

I was so excited. This was perfect. I remembered the high I felt at the parade. I'd be able to know what my mother felt as she called me crying that night. Would I cry? Probably. And I was totally okay with that. Because I would actually get to experience it this time. I’d finally understand the joy that all those other people were feeling that day. The city I loved would be hoisted on top of the national stage in glory yet again. It was happening!

Except... well, we all know how that story ends.

I don't know what would have happened if the Phillies ended up winning. Maybe I wouldn't have become the fan I am today. But in that moment, I got a tiny taste of the crushing agony that comes with being a baseball fan. And I came away from the experience with a hunger for more.

And so every season since, my interest grew. Over the offseason (and beyond), I researched Phillies history out of fear that I would get called out as Not A True Fan. I acquainted myself with all the big names and events of Phillies history before moving on to general baseball history. I think I spent an entire weekend one winter binging on Ken Burns’ Baseball.

Unfortunately, my interest in baseball increased in direct disproportion to the Phillies’ success. After being christened in the heartbreak of the 2009 World Series, I proceeded to watch as they fell further and further from a Championship. The team went from fun and exciting to hard to watch in the span of a few short years.

But, here I am, writing a personal reflection on a Phillies blog.

In all of this, my biggest fear is that I might never get to experience a parade down Broad Street as a true fan. Watching everyone reflect back on that today is very bittersweet. Even so, it’s been a fun ride. I may have arrived to the party a bit late, but I'm happy that I'm even here at all.

Enjoy your fond memories of 2008, friends. I hope that some day soon, I can share a similar experience with you all.