We know the team searches out pitchers with less noticeable platoon splits. But how do those pitchers actually go about making that happen?

Share All sharing options for: How the Phillies’ right-handed relievers will work against left-handed batters

Two offseasons in a row now, the Phillies have added a right-handed reliever or two known for some uncommonly good success against left-handed hitters. You probably read a bit about that when the Phils added David Robertson and Juan Nicasio this winter, or when Tommy Hunter came aboard last winter. And it’s true: All three of those pitchers have had, at times, extraordinary numbers against lefty batters, even with the platoon disadvantage as a result of not being Pat Venditte.

By now, you’re probably familiar with some of the numbers those guys have posted. If not, well, take a moment to refresh your memory, if you’d like. We won’t go over those again. Instead, let’s look a little deeper to try and understand the stuff and sequencing that these three employ to help make themselves so effective against lefties.

The best of this bunch, Robertson has been incredible against left-handed hitters for basically his entire career. Both of his most prominently-featured pitches — the curve and cutter — have tilt that breaks toward the left-handed batter’s box.

Even though the camera angles of the gifs above bias themselves toward the third base side, which would cut against the visual effect of balls breaking toward the first base side of home plate, you can still detect the horizontal movement on Robertson’s pitches.

A big part is pitch tunneling, a concept tracked by Baseball Prospectus that attempts to measure the effect of differences (big or small) in release points and the subsequent pitch’s path to the plate. Consider Robertson’s release points for his curve and cutter, as measured by BrooksBaseball.

Eight hundredths of an inch, on average, separates Robertson’s hand position for the release of two completely different pitches. There’s absolutely no visual cue to be had there. Look for yourself as, on consecutive pitches, Robertson throws a cutter, followed by a curve.

One is belt-high, inside; the other drops below the knees over the middle. Two completely disparate arrivals. And yet, if we look at the ball in-flight, what do we see? 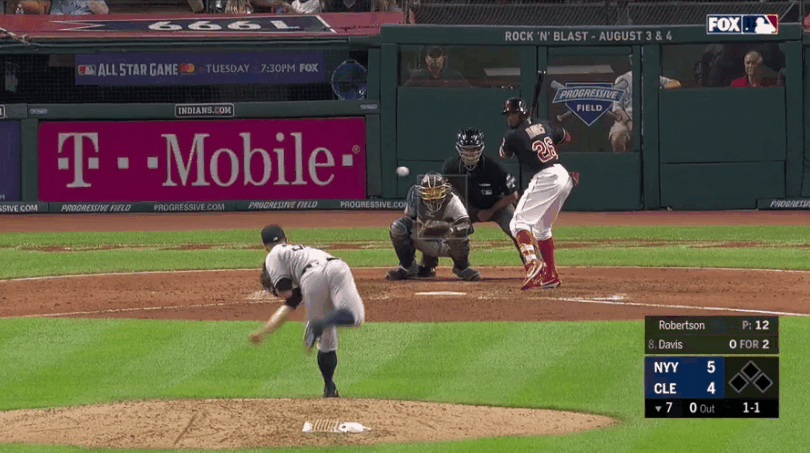 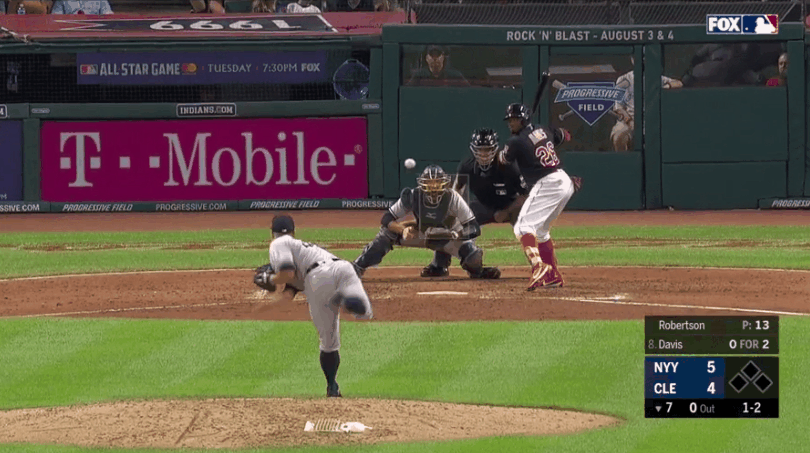 Compare the two pitches above using the slider. If you didn’t have the score bug with the count to tip you off, or any indication from Austin Romine’s positioning, would you be able to tell which of these pitches is breaking which way at the same point between the mound and the plate? Remember: Those pitches are both nearly halfway home after a microsecond. You can’t really be sure!

So, okay, great, D-Rob can throw those to a righty like Rajai Davis. How about a good left-handed bat? Someone like...Bryce Harper?

The third pitch of this matchup from June 13 is a 1-1 cutter that Harper fouls off. The fifth is a curveball that Harper misses for strike three. Take a look at both below.

Look familiar? The sequence isn’t paired, like it was with Davis, but Robertson goes to the cutter on the third base side, and then the curve low and over the middle. Again, compare stills of the two pitches in-flight. 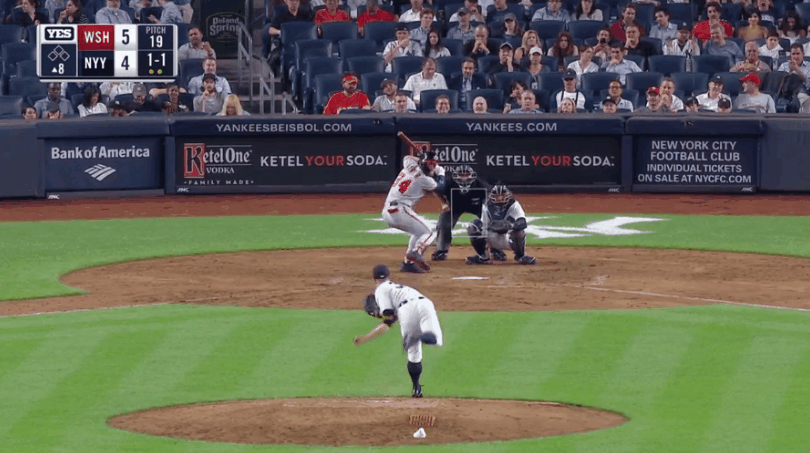 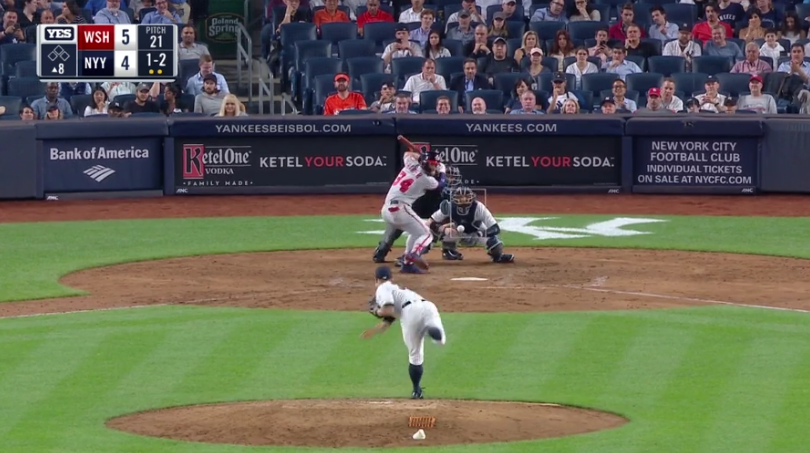 I sure couldn’t tell you which pitch was going to do what. And that’s key with Robertson: His release is so consistent and his pitches so well-tunneled that it can be especially difficult to understand what pitch he’s throwing when.

Without a curveball quite as devastating as Robertson’s, Hunter leans more heavily on his cutter. And in 2017, the year before the Phillies signed him as a free agent, Hunter’s cutter held lefties to just a .238 SLG against. That’s pretty great! Unfortunately, those results did not carry over into 2018, and that SLG ballooned to .556 after a brutal final two months (.667 and 1.091 SLG against in August and September, respectively).

You can see below how many more cutters Hunter threw overall last season over 2017, mainly at the expense of the curveball.

A big part of that could be due to his usage. The Phillies clearly figured Hunter would be an effective lefty stop gap — in the absence of a viable, known second lefty after Adam Morgan at the season’s outset — and they ended up using him against lefties nearly as much in 2018 (139 lefties faced) as the Indians, Orioles, and Rays did in 2016 and 2017 combined (146 lefties faced). Walks, extra-base hits, homers, they all went up.

Hunter’s cutter effectiveness lies in his ability to tempt lefties into offering at pitches they’re not fully equipped to square up.

The coloring above is a bit deceptive, since the gradient’s based on percentage distribution, instead of being inclusive to the sample; Hunter got high whiff rates down-and-in and up-and-in. Hunter, though, didn’t quite yank the carrot away quick enough, leaving too many cutters in the zone that were, appropriately, tattooed. Subtracting Statcast’s xSLG from Hunter’s actual SLG allowed on the inner half (Gameday zones 3, 6, and 9, if you’re curious) yields a difference of only .015. By that measure, Hunter was lit up commensurate with his cutter placement.

With Robertson now on board, there’s less pressure on Hunter against lefties, even before considering the true lefty upgrade the Phils made in acquiring Jose Alvarez earlier this winter. Whatever the frequency of his deployment, though, he’ll need to avoid missing in the zone a bit more successfully in 2019.

One thing I absolutely did not expect to find when researching this article was that Juan Nicasio has an absolutely stunning K/BB against left-handed batters over the last two seasons. Seriously: Of 204 lefty batters faced, Nicasio has 74 strikeouts to 7 walks since 2017, and one of those walks was intentional. That’s Cliff Lee-type stuff.

Unlike Robertson and Hunter, Nicasio does not feature a pitch that gets classified as a cutter. To look at the pitch — which pitch info systems call a slider — you’d think it resembles a less-dramatic cutter more than a plainly-noticeable slider. You can be the judge.

Nicasio ups his usage of the slider when ahead in the count and/or with two strikes against lefties, so he clearly favors it as an out pitch. And last year went well in that regard, as opposing lefties hit just .250 with a .300 SLG against Nicasio’s slider-cutter, and of the 20 ABs that ended with a slider, 10 of those were Ks. Some credit is probably due to Mariners catcher Mike Zunino, long praised for his receiving ability, for helping Nicasio post a 38-to-3 overall K:BB ratio while he was behind the plate last season.

Things get a little wild when looking deeper into Nicasio’s “expected” stats against lefties from last season. Once more according to Statcast, Nicasio yielded an opponents’ AVG on the slider 135 points higher than its expected number based on exit velocity and the like (.250 actual vs. .115 expected). Look, at the very least, we can probably bank on Nicasio not yielding a .402 (!) BABIP again this season; no one has ever had a season with as high a K% (29) and as low a BB% (2.7) while still seeing more than 40 percent of balls in play fall in for hits. If ever there was a bounceback candidate in the wings, it might just be Nicasio.

Having Jose Alvarez around should help things. Getting late 2017 Adam Morgan to show up would also be cool. Austin Davis and James Pazos certainly provide added depth. But the Phillies have shown a proclivity toward adding pitchers — regardless of handedness — that have the stuff to handle the platoon yin to their pitching yang. In the three pitchers above, the Phillies have three pitchers they’ll likely count on to face a significant share of left-handed hitters in 2019. Their stuff seems up to the task.