No, I didn’t spell his name correctly the first time and had to Google it, why do you ask?

Share All sharing options for: Off the wall trade target: Jeff Samardzija

This is the first in a semi-weekly look at some trade targets that you might not have considered and whether it would make sense to trade for them.

Did you hear about the Phillies and their pitching staff? It wasn’t what one would call “good” last year, at least not in the classical vernacular. They had a little bit of trouble finding guys who could throw more than four effective innings in a row, and when they did, it seemed like injury and its cold fingers would grip that pitcher’s entire body and sent him into the phantom zone. So it would make sense that part of the offseason strategy would be for the team to search for reinforcements, players that can not only withstand the season-long rigors of pitching, but could also do it at an above average rate.

Now, since good pitching is in short supply around the league, the Phillies might struggle to find all of their solutions on the free agent market. They could, but it is doubtful. Instead, they might have to put out some feelers about acquiring some of the bigger ticket items, players like....um...well I don’t know. Most of the rumored players that could be moved all have their warts. The job of the Phillies is to look past those warts and try and find value. One player that they could look at is Jeff Samardzija.

Now, before you recoil in horror, let’s make the case for acquiring the Shark. Last year, he made 32 starts for the Giants, amassing 181 1⁄3 innings of 3.52 ERA ball. He struck out hitters 18.9% of the time while only walking hitters 6.6% of the time. Surface level, those aren’t bad numbers. His ERA doesn’t hold up too well when stacked against the more advanced pitching rates (4.40 DRA, 4.54 FIP), but that is still good enough to remain in the rotation. That FIP would have been the second best number in the Phillies’ rotation last year.

So, why would the Phillies be looking to acquire him? Well, he has been a pretty durable and effective starter for some time now. Those numbers you see above you aren’t all that dissimilar from what he has done since signing that contract with San Francisco, outside of an injury plagued 2018. If there has been regression on his part, it hasn’t shown up in the numbers.

We also have to look at his contract situation. It should be fairly obvious that San Francisco won’t be contending for too much in the coming season. After all, they hired Gabe Kapler. No, even when they got really hot last year and threatened to take the wild card, they suddenly ran cold and were but a memory in the playoff race come September. Headed into 2020, the situation doesn’t look rosy either. A lot of their talent is either declining or has already declined passed the “desirable” stage. They just lost their best bullpen piece. Their farm system has continually ranked near the bottom of the game. In sum, this team won’t be that good. It’s possible they’ll want to move on from the nearly $20 million owed to Samardzija and begin to get younger and cheaper. Acquiring someone like Samardzija might be rather easy. All it would cost would be taking on most of his contract. Were the Phillies to do so, the return headed back to San Francisco would minimal. It would almost essentially buying a starter on a one year deal. So, why not trade for him?

Well, there are some red flags to send up about Samardzjia. First is his velocity. Last year was the first year his average four-seam fastball’s velocity dipped below 92 miles per hour.

In fact, if you look closely, most of his pitches lost a significant amount of velocity. There could have been some lingering effects from the injuries he suffered in 2018, those being shoulder ailments. It could also be that he had thrown over 1,500 major league innings and that time is beginning to catch up. Whatever the reason, the loss of velocity is causing hitters to get better looks at his pitches and, when they swing, to miss far less than what they have done in the past. This is his whiffs per swing from 2019 on the left and from 2017 (before the injury) on the right. 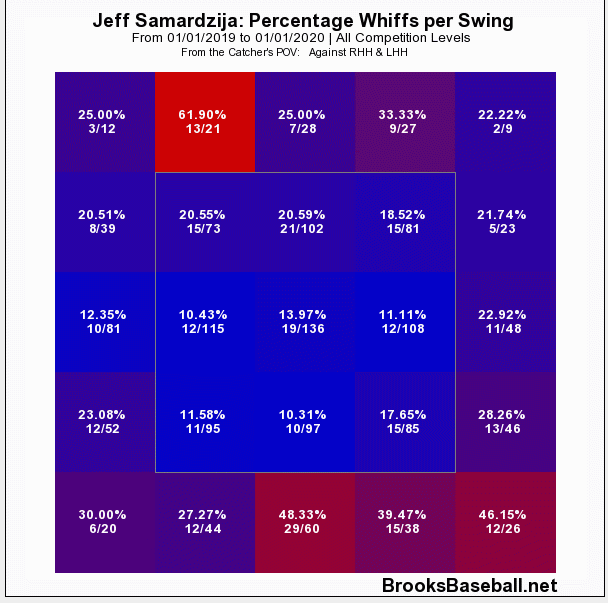 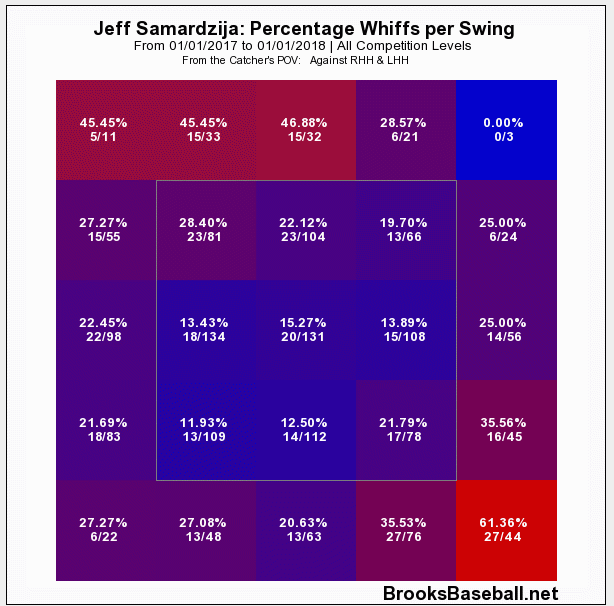 When he’s in or around the zone, players just weren’t swinging and missing anymore.

All of this is enough that it’s feasible Samardzija is approaching the cliff that is the end of a pitcher’s effectiveness. Having said all of that, there are some things that perhaps could be tweaked that could help Samardzija should the team acquire him this offseason. Perhaps the team could help him rediscover some lost velocity with a mechanical tweak or two. Perhaps they can help rediscover some lost sink on his two seam fastball, a pitch that got knocked around last year compared to seasons past. Perhaps, perhaps, perhaps....

With the Phillies scouring all corners of the free agent and trade market for more reliable pitching, it is likely that Samardzija’s name will come up (I finally spelled it right first try there). You can make a logical argument for the team to get him just as much as you can make the argument to shy away. It’ll continue to be interesting who the team targets. For now, all we can do is speculate.