The instant impact of Didi Gregorius

Share All sharing options for: The instant impact of Didi Gregorius

There is basically nothing wrong with a one-year Major League deal. The lack of long-term commitment means even the worst of flops is gone in six months, and even if it’s a success and the player leaves for greener pastures afterward, well, you’ll always have the memories.

Enter Mariekson Julius “Didi” Gregorius, OON, a Dutch knight. Quite literally. Apart from being a member of a chivalric order in the Netherlands, Gregorius has been a pretty good professional baseball player for a little while now, and will now bring his sweet-swinging left-handed stroke to the Phillies on a one-year, $14 million contract. The New York Post’s Joel Sherman broke the news Tuesday evening.

#Phillies are in agreement with Didi Gregorius

The Phillies have the infield upgrade they’ve been strongly hinting they’d acquire. Gregorius, who turns 30 in February, presumably becomes the everyday shortstop while Jean Segura goes somewhere else and Scott Kingery continues to flit about the field. The early thought is that Segura would play second base following Cesar Hernandez’s disposal, and Kingery would mostly play third base in succession of Maikel Franco. And thus a new infield was potentially born.

Gregorius is a bit of a mixed bag, and comes to Philadelphia at a bit of a crossroads in his career. If he regains some of his 2017-18 form, the Phillies have made a huge move. If 2019 is his new normal following Tommy John surgery, things are significantly less huge.

So, what’ve we got here?

Gregorius had the unenviable task of succeeding Derek Jeter as shortstop for the Yankees, and ended up being one of the better possible options for the job. That’s not just because he hit pretty well — and got better along the way until his injury in late 2018 — but also because his personality is absolutely infectious.

Get ready for him to assign every Phils player an emoji in his postgame tweets.

And it wasn’t all a product of Yankee Stadium’s short porch, either; Didi had mirrored home/road splits those two top years, and saw his overall SLG go on a steady climb from .370 to .447 to .478 to .494 in his four full seasons with the Yankees.

A lot of that is thanks to an uptick in aggressiveness on pitches in the zone. Consider his zone profile in 2014, his last year in Arizona, and his huge 2018, and the disparities in swing rate between them. 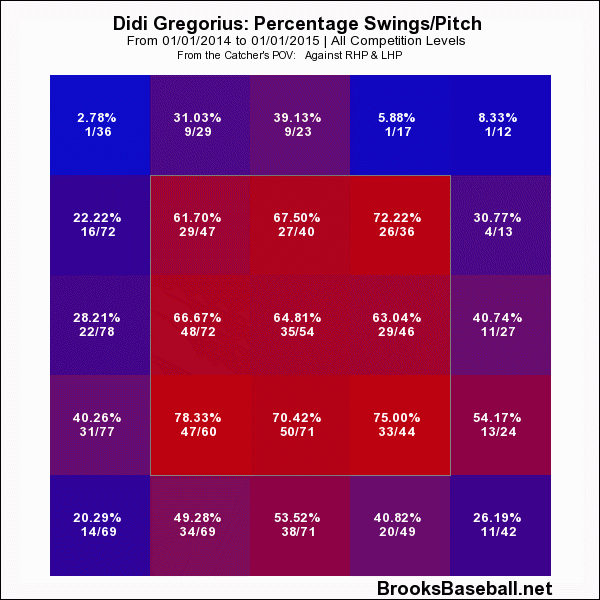 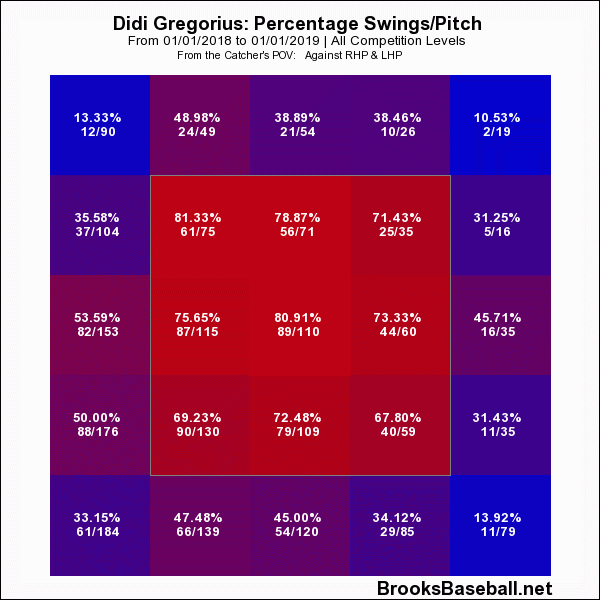 If it was in the zone, Gregorius was swinging at it. An approach that aggressive, of course, means Gregorius is not a Rhys Hoskins-type on-base threat, but if he’s getting a competitive pitch, chances are excellent he’ll be taking a cut no matter the count.

Defensively, Gregorius has also rated out as above average at shortstop throughout most of his career. He’s certainly the best option on the Phillies now, and possibly bolsters the middle of the diamond to the point that a double play combo of he and the deposed Segura could be one of the better defensive ones the team has had for a minute.

You might have noticed how carefully I’ve been avoiding mentioning his 2019 to this point. Had he stayed healthy and rebounded a bit quicker from his late 2018 right elbow UCL tear, Gregorius would not have been available on a one-year deal. But, well, that brings us to...

It’s hard to call most of this “bad.” Again, one-year deals are usually pretty bulletproof. But there’s uncertainty in this deal, more so than usual, mostly because we’re not really sure what kind of player Gregorius is now, post-surgery.

First pass at digging in on Didi:
- HR/FB dipped a bit last year, though not a big dip. If rabbit ball goes away, he might not suffer as much as we think
- Slash line drops are concerning, but a 50 point drop in BABIP might explain some of it (cont.)

Is his worsened contact here to stay? How much will a ball change affect his previous power spikes? Can he sustain such a swing-heavy approach, or is this the year he swings himself out of too many trips to the plate?

It’s evident that Gregorius’s hitting style does not lend itself well to the leadoff or second spots in a modern lineup. The top of the order these days finds more preferential treatment given to OBP-leaning hitters, rather than those of the get-him-over-get-him-in archetype of old. Gregorius falls into the latter bucket, his swing-heavy mentality and low walk totals making him an almost prohibitively bad option to set the table ahead of Bryce Harper and Hoskins.

He does, however, now possess enough pop to make him a dangerous lower-half insert. Consider this lineup as one possible option:

Even at his slumpiest in 2019, Hoskins could work walks and get on base. His floor at the plate works as a No. 2. You could see Harper there, or even Realmuto, though J.T.’s own profile also isn’t quite as on-base-inclined as you might want directly ahead of your best hitter. Gregorius’s limited on-base potential limits his ideal lineup position to lower in the order. In a way, it’s sort of a good problem to have, especially if there is indeed a rebound coming.

As for his overall poor showing in the triple slash department, there’s a bit of a duality in play here. Consider this trend of exit velo in 2019.

After a slow start, Gregorius seemed to start making better contact before tapering off again toward season’s end, though despite the drop in numbers across the board, Didi actually had the highest average exit velocity of his career in 2019.

And all of that comes without a huge swing in batted ball profile. In these numbers, there seems to be equal amounts cause for concern and cause to think a rebound is in order. We can’t really be sure for a little while yet.

As for his arm, it’s easy to get a bit spooked at the deadly three-word phrase “Tommy John surgery,” but the impact on position players — even for those who injure their throwing arm — is less significant than it is on pitchers in terms of time lost. But a successful return from TJS is still not guaranteed. How Didi’s fielding is affected over a full season post-Tommy John is another thing that remains to be seen.

The Phillies got better. How much better...well, no one’s really sure yet. Didi Gregorius is a good baseball player with a relatively recent major injury and a somewhat corresponding drop in production, but also a not-much-more-distant history of being a power-hitting shortstop with good defense and modest wheels. He’s a low-risk, one-year signing that should help the team, although not as much as signing Anthony Rendon or Josh Donaldson would have.

The Phillies are going to exceed at least one of the tax thresholds basically no matter what. but they’re still making themselves operate on somewhat of a budget. Gregorius is that budget alternative to Rendon or Donaldson, but that’s hardly an insult. Whether the club can use the rest of its resources to successfully finish building this team into a true contender — which, even after adding Gregorius and Zack Wheeler, it still is not yet — is an open question with plenty of winter left to go.