Five-hundred twenty-nine times. Jorge Alfaro swung and missed at a pitch five-hundred twenty-nine times in 2018. If that sounds a bit staggering, it’s because it is staggering — no players with at least 150 PAs made as little contact, rate-wise, in 2018 — and you’d be within your rights to wonder how Alfaro stacks up to a wind turbine in that light.

Alfaro’s strikeout rate is a sore point for many who feel the 25-year-old catcher may never truly break through and become an All-Star-caliber player. Even leaving his defense to the side, rough-yet-high-potential that is in its own right, the Phillies must certainly hope that Alfaro has room to put more balls in play as he enters his second full season as the team’s starting catcher.

Let’s invert things for a second: When he does make contact, boy, does Alfaro hit the ball hard. And it’s completely plausible to think his high BABIPs are somewhat sustainable in that light. And it’s fair to dream on What Could Be if Alfaro manages to trim his whiffs.

But that’s a significant challenge. Nearly 36 percent of all strikes against Alfaro in 2018 was a swing-and-miss, nearly double the league average rate. And his hyper-aggressive approach of swinging early often meant, in his 377 plate appearances, Alfaro saw only 29 2-0 counts and 16 3-1 counts. Those 7.7 and 4.2 percent rates, respectively, both hovered around or below the 50th percentile for the league. Not ideal.

But aggression isn’t necessarily a problem in and of itself. Sure, you’d like your hitters to be as well-rounded as they can be, but a guy who hacks at a few more pitches isn’t inherently evil. And while I don’t expect us to reach the end of this exercise understanding exactly how this issue can be corrected or even mitigated — the Phils pay some coaches to do that, after all — we can at least gain a better understanding of what ails him, and better understand whether he’s making progress and improvements as the coming season wears on.

With that in mind, here are two things Alfaro needs to work on at the plate in 2019.

Alfaro had a tough time connecting with buried sliders from righties last season. From the heat map below, you can see a pretty clear pattern.

The easiest conclusion to jump to is that this is a problem of pitch recognition. Sliders from RHPs, non-Brad Lidge category, have a tendency to break away from a right-handed batter. Pitches that eventually end up crossing the zone low and on (or off) the outer third leave the pitcher’s hand seeming as if they’ll cross over a meatier part of the plate. And then: Hoodwinked!

Alfao was 13-for-70 on PAs against a righty that ended in a slider, striking out 31 times in the process. He did hit three homers, but those were all on pitches on the inner half, not the zone he swings through so aggressively.

These seem to be the biggest hindrance to Alfaro at the plate right now. He’ll see sliders in all counts, so improving his identification should yield immediate results.

Alfaro didn’t have a discernible platoon split in 2018, with a .006 difference between his OPS against lefties (.726) and righties (.732). With slider break from lefties posing a bit less of a problem for Alfaro than the righties detailed above, Alfaro could seize the upper hand against southpaws more frequently.

In reality, lefties were already pitching backward to Jorge: Instead of going for the hammer or wasting a pitch while ahead, lefties threw Alfaro a fastball nearly half the time (44 percent), locating them mostly up or in. But Alfaro had just six hits — including one homer — on 0-1, 0-2, and 1-2 fastballs from LHPs. That one homer? Glad you asked.

Rockies starter Tyler Anderson made a mistake, and Alfaro popped it five rows deep in right field for an opposite-field solo shot. He’s late on it, possibly expecting a changeup instead of a heater, and Anderson misses his spot badly. Look at Tom Murphy’s target: Elevated, which fits in with the book on Alfaro mentioned above. Instead, it ends up thigh-high, and Alfaro swats it.

The sequencing of this particular PA is interesting, though, because to get to 0-2, Anderson was aggressive.

Now, compare the locations of pitches two and three, respectively, below. 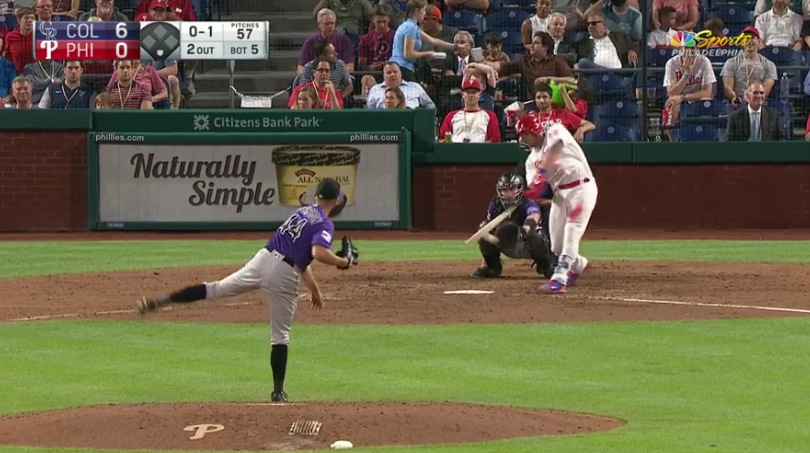 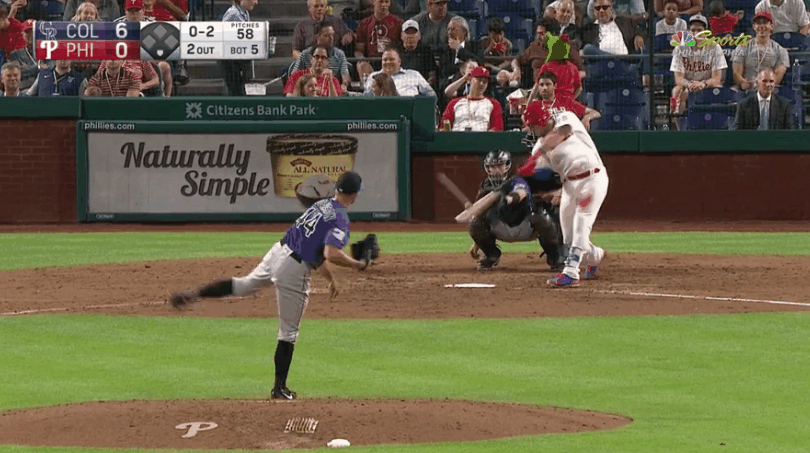 Anderson and Murphy tried to change eye levels, but instead planted a second straight pitch in nearly the same tunnel that Alfaro had just had a good swing at. Jorge may have been late on this pitch because of the pitch that immediately preceded it. Had the 0-2 heater been placed up, as intended, the outcome may have been far different, given Alfaro’s vulnerability to those two-strike fastballs.

Those two things alone won’t turn Jorge into Buster Posey overnight, but shoring up Alfaro’s defenses against those disappearing sliders from righties and somewhat surprising fastballs from lefties could (ideally!) lengthen his plate appearances and put him into more favorable counts moving forward.