The link and the disconnect between Zach Eflin and Max Scherzer

Share All sharing options for: The link and the disconnect between Zach Eflin and Max Scherzer

As I dug into the books in the wake of Zach Eflin’s rough outing Saturday, I’ll admit I wasn’t expecting to see Max Scherzer’s name come up at any point. But as I opened up my usual slew of research tabs, there it was, staring me down with its miniature, signature, heterochromic eyes.

What started out as a quest to find out why Eflin almost completely abandoned his secondary pitches in last night’s game turned, thankfully, a little more positive: What is it about Eflin’s stuff that’s flagged 2019 Scherzer as such a strong comparable? And what can we learn from this comp that could help Eflin get results that look a little more regularly like Max’s?

Before getting too deep into the weeds about pitch construction and sequencing comparisons, it’s worth noting that Eflin and Scherzer have slightly different arsenals and usage rates. See below.

What Statcast is flagging as Eflin’s slider is more commonly referred to here in Philly circles as his cutter (it breaks a lot). Statcast data also had one Scherzer pitch flagged as a sinker, which I’ve chosen to exclude here, since I suspect it might have been misclassified.

The big standout to me isn’t that Eflin throws about 1-2 MPH slower across the board, it’s that the average separation Scherzer gets between his fastball and change (9.7 MPH) is nearly twice what Eflin is getting (5.7 MPH). Scherzer, because he gets such intense separation, is also able to use his change against RHB, which Eflin clearly hasn’t felt comfortable doing yet, opting instead to stay with the harder stuff and throw sinkers as the arm-side pitch to RHB. More on that later.

Scherzer’s change is further distinguished by a huge dip in spin, dropping from about 2,500 RPM to 1,660, while Eflin’s moves only from 2,180 RPM to 1,900. That sentence merely serves to put into numbers what you could probably already tell just by watching. But while the composition of those pitches differs significantly, they still manage to accomplish nearly the same thing in action.

A very handy tool for comparing tracked pitch movement is Baseball Savant’s Arsenal tool, and with a bit of overlaying, we can compare the movement of Eflin’s (left image) and Scherz’s (right image) stuff, graphically. My editing isn’t pixel-perfect, so please bear the axis labels in mind as you compare the visual. 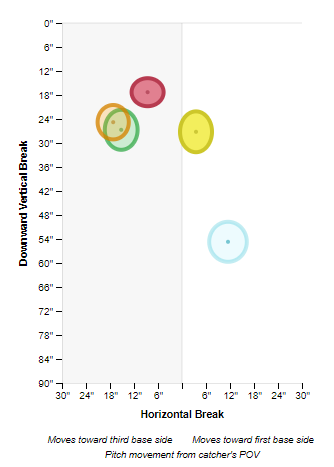 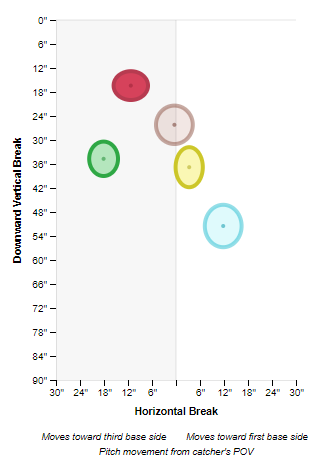 Eflin’s curve may be losing his favor — the only one he threw Saturday was hit for a homer — but he’s obviously not going to stop throwing heaters anytime soon, and despite the difference in total spin noted above, the pitches’ movement is remarkably similar. You can start to see why Savant thinks these two are similar.

But on the other hand, notice hos disparate the green circles are. There’s a clear, definitive separation between Scherzer’s fastballs and changeups not just in speed, but in trajectory. Eflin’s are nearly intersecting, blurring the lines between the pitches and, at times, likely making them look identical.

Let’s look at an example from Scherzer’s last start, on April 7, against the Mets. Leading off the bottom of the fourth, Michael Conforto stepped in for his second PA. In his first PA back in the second inning, Scherzer had started off fastball (called strike), fastball (ball), change (ball), before Confort eventually doubled on a cutter. Scherzer started PA No. 2 with two curveballs, which he did not throw in PA No. 1, for two called strikes. He then went cutter (foul), change (ball), fastball (ball), fastball (foul) to set up a 2-2 count.

Here is that last fastball on pitch six...

...followed next by the changeup that gets Conforto swinging.

Those pitches start out looking like they’re going to the exact same place, and instead end up 9 MPH apart with a foot or so of separation.

Now, let’s look at a comparable scenario from Eflin last night. In the bottom of the third inning, Neil Walker stepped to the plate with the Marlins leading, 3-0, and with Eflin having struck him out in the first on three fastballs and two cutters/sliders.

On the second pitch of PA No. 2, Eflin follows a low fastball that was called a strike with a high fastball that tempts Walker, but ultimately stays well high, leveling the count.

Where Eflin missed is key here. Realmuto set up inside, and Eflin missed over the outer half. Instead of setting Walker’s eyes on the inner half, the hitter’s now tracked a pitch tailing away from him.

Walker then proceeded to do this on the next pitch.

Both the fastball and changeup moved the same way, occupying the same basic flight path with different elevations. What’s more, the separation in speed was only 4 MPH. Essentially, what Walker got to do was see the same pitch three times in this PA — if you include the first-pitch fastball located near the home run spot — with the only discernible difference in velocity just enabling Walker to tee the pitch up, not throwing off his timing.

Now, has Max Scherzer struck out more guys on accident that many others ever will with 110 percent effort? Yeah, sure. And every pitcher would want Max’s raw stuff. But this isn’t to show that Eflin is inferior to Scherzer; it’s to point out that Eflin does have some good raw stuff, enough to draw a compositional relationship between his pitches and Scherzer’s, but is not varied enough with his arsenal to avoid being penalized when he makes locational mistakes.

In this way, Eflin’s transformation into a mostly-fastball pitcher through his first three starts is a bit discouraging. If he’s to keep up a high level of performance throughout this season, he and his batterymate and coaches will need to work on (re-)incorporating and refining a reliable offspeed pitch. Eflin’s next turn in the rotation is likely slated for Thursday against the Rockies, and his pitch mix will definitely be something to keep an eye on in that outing.