Share All sharing options for: How Rhys Hoskins’s in-game adjustments stole a win for the Phillies

Jose Berrios, it has to be said, is nasty. He was — still is, really — my preseason pick for AL Cy Young Award winner this season, and Sunday afternoon did little to dispel those thoughts. For six-plus innings, Berrios barely even allowed medium contact, let alone anything hard-hit, and Zach Eflin’s best efforts looked like they were headed straight for the recycling bin.

But then came Hoskins’s third trip to the plate against Berrios, and everything changed. A loss turned into a win at the flick of a wrist. But that AB wouldn’t have been possible without Hoskins’s ability to adjust to pitchers, something he’s brought with him through his time in the minor leagues and is now putting into practice against some of the game’s best.

After a Bryce Harper walk, Hoskins came to the plate with two out and one on. Minnesota held a 1-0 lead thanks to Max Kepler’s lead-off home run, and Berrios was trying to settle in.

A sinker that rides, but stays high. Berrios and catcher Jason Castro were looking to bust Hoskins inside, but the pitch starts above the zone and doesn’t tease a swing from Rhys.

Berrios is unafraid of throwing his excellent, two-plane curve in any count. He catches Rhys here to level the count.

If you look closely at Hoskins’s head after the pitch comes in, you can see him exclaiming something, probably since that curve was absolutely ripe for the crushing if he had been expecting it.

Hoskins tracks this one well, fouling it off straight back. It’s almost the exact same pitch as the one before, but tails far enough to the outside edge to miss Rhys’s barrel. Berrios hits his spot with barely a move of the mitt from Castro.

A two-strike sinker runs too far inside. Harper ends up stealing second base on this pitch, having timed Berrios well enough to get a good jump despite Berrios’s quick delivery, hard pitch, and quick delivery from Castro.

Hoskins, again, sees that pitch start out nearly out of the zone — no matter which way it was going to break — and doesn’t look tempted to offer at it. He backs out of the way and re-levels the count, now with a man in scoring position.

They come inside again with a fastball, though this one comes out of the hand over the middle of the plate, which is enough to get Hoskins to be defensive with two strikes. He’s out in front and grounds it well foul.

This one gets Rhys to chase, ending the AB in a strikeout.

What’s so devastating about Berrios’s stuff is that his fastball — which breaks arm-side — and his curve — which dips down and glove-side — have these two completely different breaks that come out of the hand looking eerily similar. 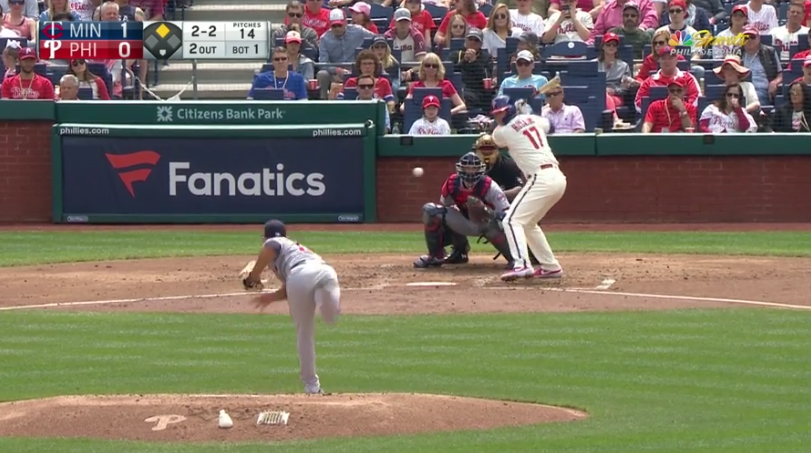 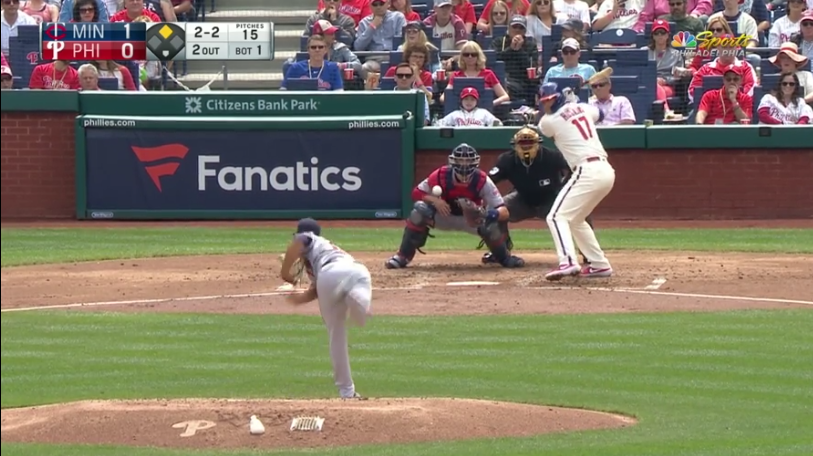 With the ball at a similar point in-flight, and two completely different break incoming, Hoskins gets deceived. Mind you, these were consecutive pitches. Berrios gets the best of the first matchup.

Leading off the fourth inning with the Phils still down by a run — thanks in no small part to Andrew McCutchen’s Hose Report — Hoskins was back for a rematch.

Berrios starts this encounter backward, dropping a hook in to start. Like the 1-0 pitch in the first AB, it’s a hittable pitch...if Hoskins had been looking for it.

Another one Rhys probably wishes he had back. He timed this one well enough, but could only pop it up into foul territory. Twins first baseman C.J. Cron would muff the catch, and the at-bat continued.

A sinker that stays elevated. Hoskins is usually pretty good about laying off high heat, so he doesn’t seem all that antsy on this one.

Berrios and Castro really seemed adamant about trying to bust Hoskins inside. This one, again, rides too far off the plate to cajole Hoskins into chasing, so the count levels at 2-2.

Mmm, there it is again. Berrios gets Hoskins to chase another buried curve, and that’s two strikeouts. I let this gif run a little long to capture to Hoskins exclaiming something, again, after missing this one. Check how his helmet jolts as he starts to walk away.

And you can understand the frustration. Hoskins, though he missed this curve and fouled off a couple other pitches to this point, has been timing things well. He’s not completely fooled, but some of these pitches — that last curve especially, whew — are just filthy. I’m not sure what any hitter is supposed to do with that curveball.

In the sixth, McCutchen walked to lead off, but Segura popped out and Harper grounded out to bring Hoskins back to the plate with two out. Cutch, to his credit, advanced from first to third on the groundout, thanks in part to a defensive shift and (in larger part) to McCutchen’s wherewithal.

So the stage was set.

Berrios and Castro wanted to start this AB off the way they started the second, but the curve stayed high and Hoskins let it go by for a ball.

Doubling up because he can, Berrios gets this one to clip the outer half of the zone and the count goes 1-1.

The ability of this battery to keep pitching Hoskins backward is making an already-tough task that much tougher. Hoskins has gotten himself ahead in two of three PA, and instead of being rewarded with a get-me-over fastball, he’s had two curveballs drop in.

Intended to be another fastball inside, this one gets yanked. Not close. Hoskins goes back ahead in the count.

I think, at this point, all of Berrios’s backward pitching was in Hoskins’s head. Behind in the count, Berrios finally throws a fastball over, and...Hoskins watches it. He leans into the plate as if he was looking for that ball to start tailing away, and instead it comes back and hugs the zone.

A pivotal pitch. Hoskins had already been victimized by two buried curveballs, and the Twins battery was obviously thinking of making it three-for-three. But Hoskins picks up on it, understands how much it’s about to break away from the zone, and holds up.

The pitch above is emblematic not only of Hoskins’s ability to work counts, but to learn from the pitches he sees and adapt his approach. The 2-2 curve above isn’t Berrios’s best, but it does start out its trip toward the plate appearing as if it could hit the zone, and a lesser hitter would probably look to chase and protect.

Hoskins is not a lesser hitter. The count goes full.

I made an agitated noise while watching this pitch live. It looks to be close to where Castro was spotting, but it’s hung. It’s a hittable pitch, even as much as it’s moving. Hoskins is on it, but only fouls it back.

An inside fastball that catches the plate, but not enough of it for Rhys to really do much with if he hoped to keep it fair. He fouls it off down the third base side.

Another one that I’d call hung! And Hoskins fouls it straight back again!

At this point, I’d thought Rhys had seen the only truly hittable pitches he was going to see for the rest of this plate appearance. Berrios had to be thinking that he wasn’t locating his curve the way he wanted to, and he and Castro might have opted to burn a pitch rather than make another mistake in the zone...

This is, by no means, a bad curveball. This pitch would be called a strike if Hoskins let it go. It’s just above the knee, over the outer half, and designed to avoid good contact. Baseball doesn’t always work in strict accordance with the laws of logic, though.

Hoskins, in a pose reminiscent of Jeff Franceour in 2015, is bent over at the waist and somehow, some way, gets this ball to leave the yard. You can give credit to Citizens Bank Park, if you like, but as this is a Phillies blog, I’ll defer credit instead to Hoskins’s offseason weight training.

Pitches like pitch No. 9 above are not the kind you expect to get hit for a homer to the pull field...from a right-handed hitter.

But here we are. Hoskins, having seen and/or swung at 11 curveballs prior, got a twelfth and did not miss it. The fact that Hoskins was able to muscle it out is impressive enough. Keep eating your Wheaties, Rhys. But what might be even more impressive is the untold story that unfolded across these 20 pitches: Rhys learned how the curve traveled, knew where it would hit the zone once he picked it up out of Berrios’s hand, and only then was able to make enough contact to power one out for a go-ahead homer.

Hoskins is an intelligent hitter. He analyzes and absorbs pitchers’ arsenals, and though he might not ever lead the league in batting average, he’s skilled enough to make these in-game adjustments to make his one hit count, if that’s all he gets (for the record, Hoskins added a double later in this game). On Sunday, he did it against one of the game’s emerging stars, and won his team a game in the process.

Just another day at the yard.