He’s getting hot. What changed, and how long can he keep it up?

This was the kind of series we’d been waiting for since the season opener against Atlanta, and the hot streak might only just be beginning.

Bryce Harper stepped to the plate 12 times over the last three days, and almost single-handedly powered the Phillies to a sweep of the Cardinals at home. They settled for just 2-of-3 (they’re 3-0-1 in their last four series), but not without Bryce doing his damnedest to avoid a loss on Thursday.

The raw numbers from this series can make you sweat:

More than just being a hot series, these 12 PAs might turn out to be the springboard that launches Harper’s season up near the heights we’d all hoped he’d hit.

Hey, you wanna take a closer look at the eight hits? Yeah, me too. Let’s do it.

Here’s an early sign that things are settling back into place. It’s a 3-1 count with two down, and Harper represents the would-be tying run. Wainwright, instead of giving in with a fastball, goes backdoor curve. He hangs it a little, but Harper doesn’t overswing like he’s guessing fastball. Whether he’s expecting it or adjusts mid-air — I lean the latter but I can’t really tell for sure! — he stays on it and pulls it down the right field line.

That hit set the tone for what ended up being a comeback win (spoilers).

Next time up against Waino, Harper gets a 2-2 fastball over the outer half at a perfect hitting height. Harper’s had some trouble this year swinging through pitches over (or just off) the outer edge, so this was especially nice to see.

Oh, now we’re cooking. Remember when Ryan Howard would get red giant-hot and smoke line drives and towering dingers the opposite way? Well...this is only a single. But it marked the second consecutive day Harper planted a base hit in LF, after nearly two weeks without a hit of that kind.

He probably won’t do this a lot, even if he stays locked in; it’s more an accidental effect of swinging a good bat than something he sets out to do. If he’s able to get enough on 97 from a LHP on the outer edge to line one that authoritatively, it’s hard to complain.

This was Harper’s second first-pitch homer of the year, and first off a LHP (which he has been absolutely destroying all year, even at his slump-iest). Cabrera’s pitch is part of a minor trend: LHP will throw Harper a first-pitch breaking ball half the time (49 percent). But Harper hadn’t even been in the box for one of Cabrera’s slurvy sliders — he saw four fastballs in his first PA — so being able to track and time this one simply from studying is pretty impressive.

Interesting contrast of first-pitch hits here. With hit No. 4 above, Harper sat back on a first-pitch curveball from Cabrera (in their second matchup of the game), but is still right on top of first-pitch 94 from Michael Wacha on the right side.

You’ll notice that’s a ground ball up the middle; Harper would still wind up getting a double out of it.

Well, hey, what’s this? Another opposite-field hit? Maybe there’s a little something more to that, after all!

He’s late, but the sinker is right over the heart of the plate and elevated, so the barrel still finds it rather easily.

First-pitch fastball from a right-hander again? Those don’t seem to be ending so well for pitchers lately!

To Dakota Hudson’s credit, this is a really, really good pitch. It’s paint, 95 in the low-and-away nook of the zone. It’s going to be called a strike to get him ahead if Harper lets hit go, and he doesn’t have much of any business making as firm a bit of contact as he does here.

Andrew Miller isn’t quite what he once was, but he’s still presenting a challenge for most LHBs he faces (.636 OPS allowed entering Thursday). Miller, like Cabrera on Wednesday, throws Harper a first-pitch breaker. It feels relatively safe to say that Harper’s wise to this pattern right now, because he absolutely looks like he’s expecting that pitch.

Let’s do a quick comparison to highlight why this series of swings is notable. Take the homer off of Cabrera; need a reminder of what that looked like? Okay, sure, why not:

That’s a composed, compact, powerful swing. Now, take a trip back to last week against Jon Lester and the Cubs at Wrigley.

Not quite as tidy, and with 100 percent less contact.

What changed here? What’s the difference? 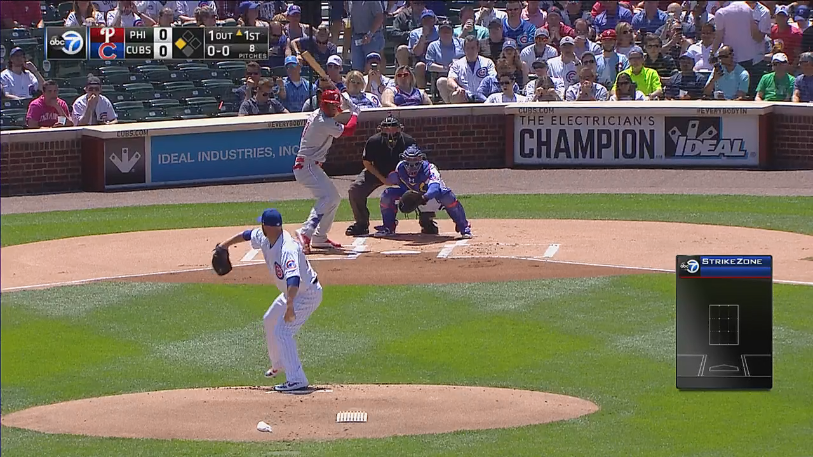 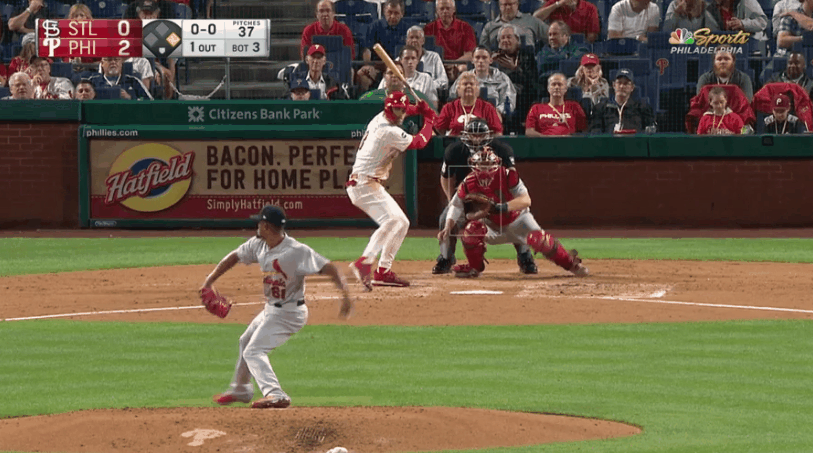 Harper lifts his front foot at the same point in each pitcher’s delivery, so his timing starts off in sync. 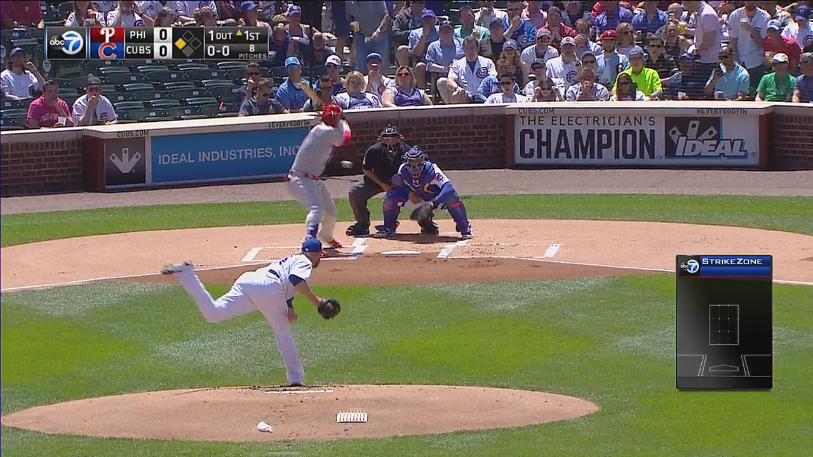 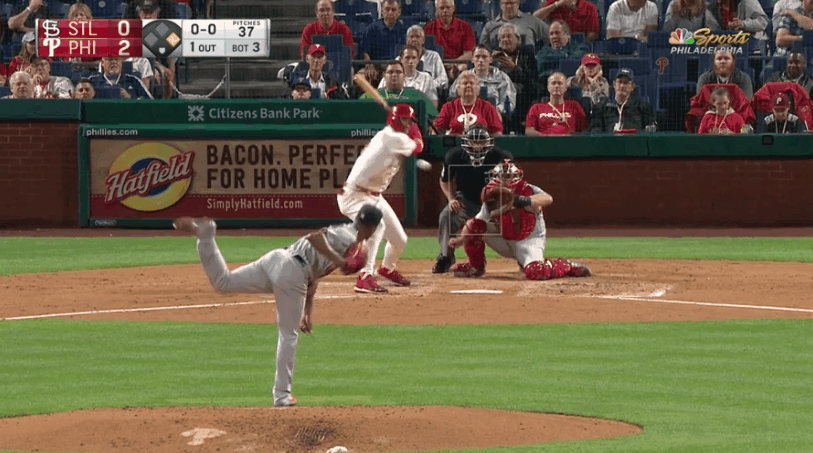 As he starts to begin swinging, we can see a bit of a difference begin to show itself. On the homer, Harper is doing a bit more sitting, his front leg more prominently bent as he starts his attack. 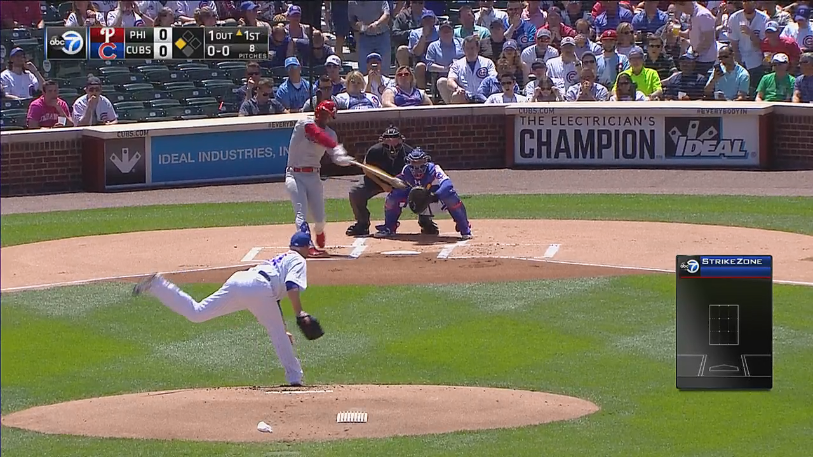 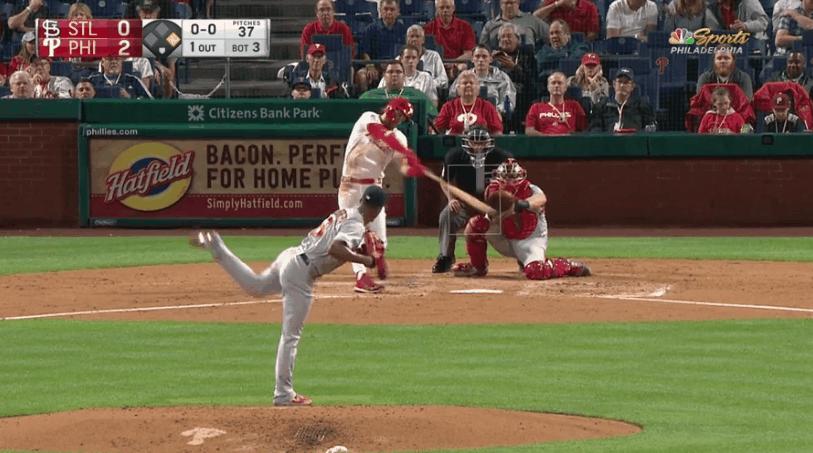 Here, at the point of contact (or lack thereof), we really start to see things diverge. Against Lester, Harper’s upper body is stiff and his shoulders more bunched. You can also see his back foot is off the ground; he’s still grounded on the homer. 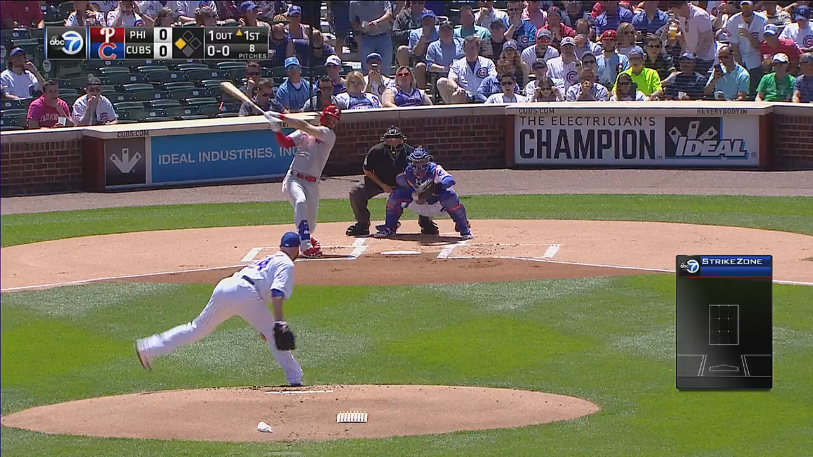 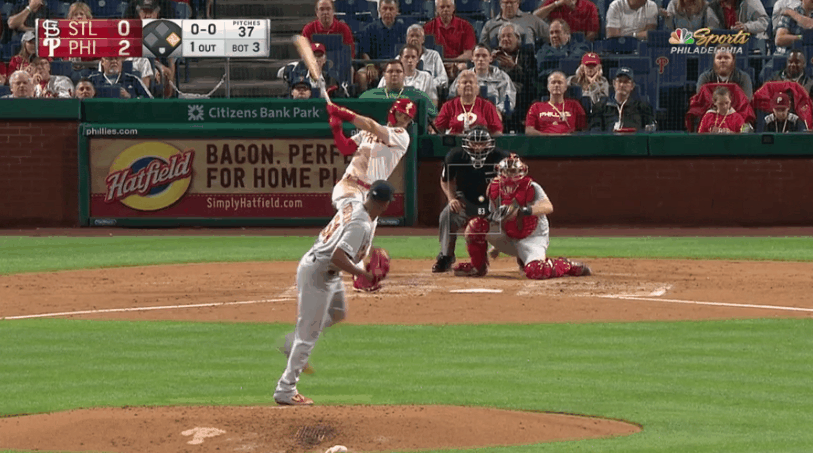 The follow-through is strikingly different. Harper’s right elbow stays tight to his body as he comes through the ball on the home run... 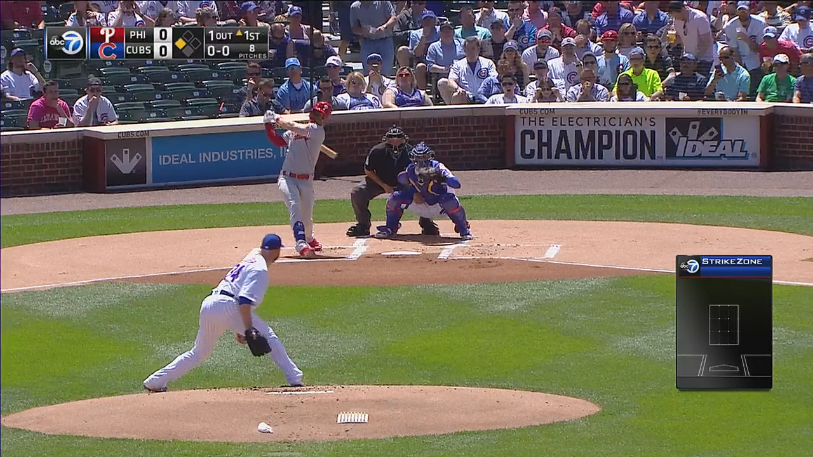 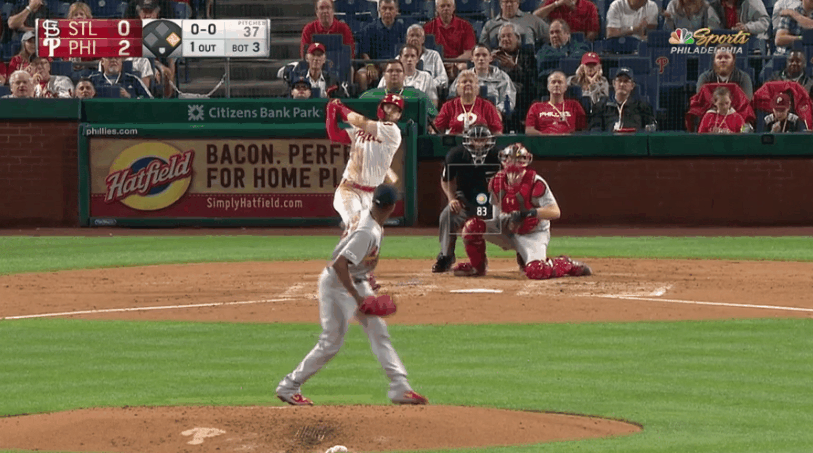 ...and so the bat’s angle is more 11-to-5 at the end than 10-to-4, his right elbow staying cocked at a right angle instead of falling obtuse.

It’s not simply a matter of contact-or-not: Harper has made adjustments, and in the St. Louis series, they paid tremendous dividends. A little bit more of this, and hittin’ season will definitely have arrived for Bryce.