Remember Cole Hamels in 2009? Yep, that’s what it feels like

Share All sharing options for: Aaron Nola’s 2019 is reminding us of another young ace’s season from a decade ago

Aaron Nola has struggled this season. There is really no question about this. Based on his 2018 totals and his third place finish in the Cy Young voting, we all expected him to be better than he has been thus far. In fact, it’s so deep into the season that you might be, like me, beginning to wonder if it will again click into place and he’ll be the Aaron Nola we’ve come to expect. If this is starting to feel familiar, it should. This is almost exactly what it felt like with Cole Hamels in 2009 after the Phillies won the World Series.

We all remember how we were somewhat disappointed in Hamels’ performance that year. We expected to have a homegrown ace leading the team to consecutive World Series titles, and yet it almost felt like his coming up short cost the team that banner. That season, he was famous for his line after his Game 3 World Series loss, the one that sports radio and team writers jumped all over.

“I can’t wait for it to end. It’s been mentally draining.”

In the above linked piece, Justin wrote several years later how it was a season that is typical of a young player, one that he has to struggle through sometimes in order to better himself as a player and person. However, looking at it from a purely statistical standpoint, you might feel like Hamels wasn’t actually all that bad.

Hamels: The Good and the Bad

The only thing that feels really all that different is the amount of hits he gave up, which can be partially explained by the BABIP that went from weirdly low to weirdly high (his career average is .288). Was he the victim of bad luck that year? Without digging too deeply into the question, we can give a solid “MAYBE!”, but in a purely subjective stance, he always felt a little different that season, like some kind of external force was at work, tearing down our baby ace before he could reach his final ceiling.

This season, that same feeling is happening with Nola. He just feels different.

There are a few theories about why he has been struggling. Matt Gelb of the Athletic wrote a wonderful article about it back in April. Since then, people have had their own theories: lost command of his stuff, tired from a larger workload in 2018, etc., but one of the things that some have noticed is that he doesn’t seem to be locating his pitches as well as he did last year. With a guy that doesn’t have an overpowering fastball in the first place, location is key to how Nola approaches pitching. Researching him a little more, I noticed a few things that looked interesting.

Last year, Nola was living at the bottom of the zone. He still does this year, but while he seems to be getting more pitches called strikes at the bottom, he is also missing just under the zone with a little more frequency. 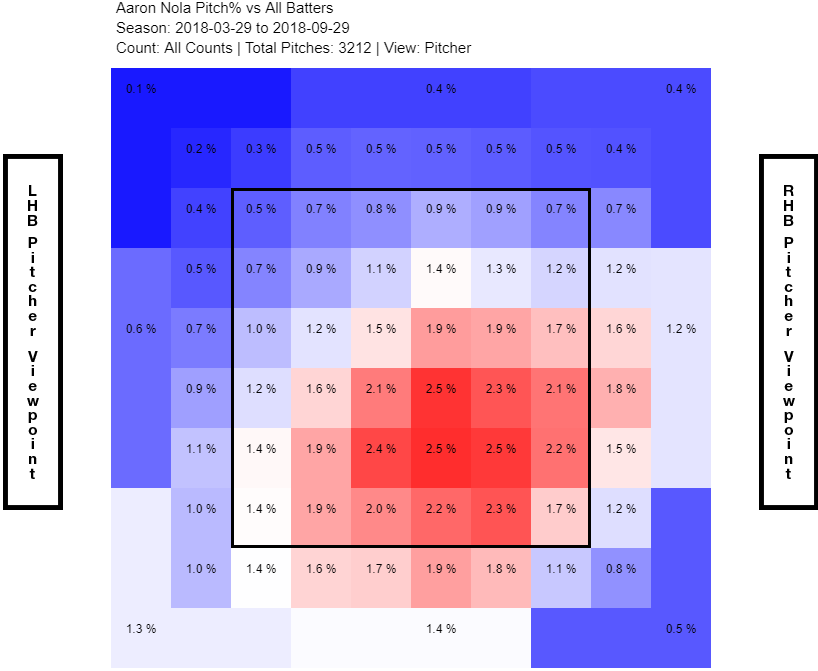 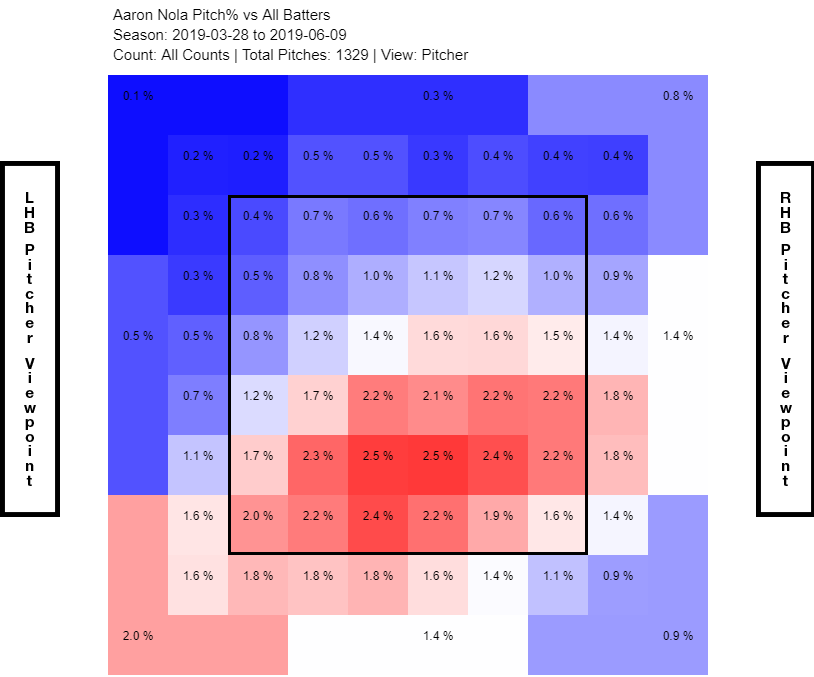 The first image is Nola’s heatmap from 2018, the second from this year. There doesn’t seem like there’s a lot of difference, but instead of focusing on the colors, focus on the numbers. As I stated earlier, he’s got more just under the strike zone in 2019 than last year. This could lead one to conclude that some umpires perhaps are ringing up those borderline strikes as balls instead. So one issue is that it’s possible umpires aren’t calling pitches strikes in 2019 on pitches they called strikes in 2018.

It’s totally fine that he’s working down there too. Of course since he lives there, you’d ideally want him to be inducing some swings and misses while he lives at the knees since whiffs means fewer balls in play. And with this defense, the fewer balls in play, the better. Is that happening? Eh.... 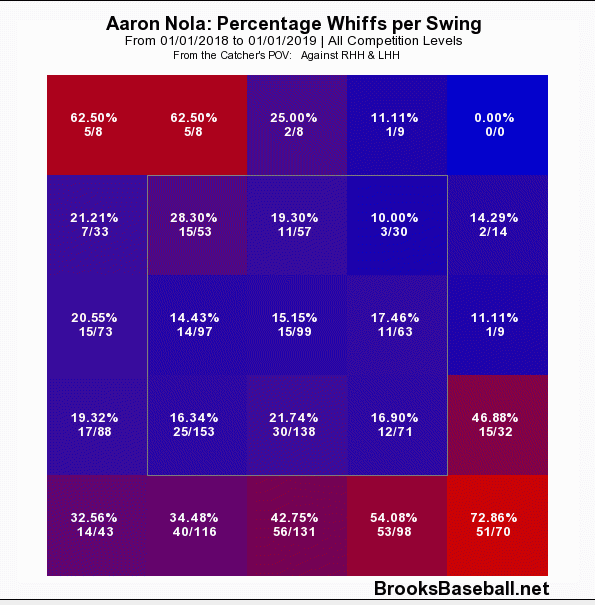 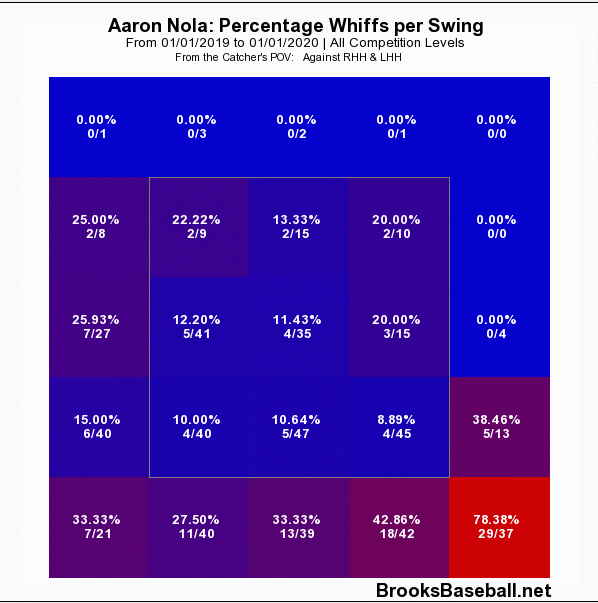 This brings me back to my original thought about Nola’s stuff. He doesn’t seem to harnessing as much as he did last year. Velocity wise, there isn’t too much of a difference from 2018 to 2019.

Even looking at the movement on the pitches, it doesn’t look like there is a discernible difference between the movement on his stuff this year and last. The only one that really stands out is his changeup, but the frequency with which he throws the pitch means it doesn’t make too much of a difference. He makes his bread and butter with the fastball and curveball.

Now, he’s had some struggle with all batters when ahead in the count, particularly with two strikes as Evan Gusz pointed out the other day. Looking more specifically at it, these are the numbers from 2018 on any count with 2 strikes, and these are the numbers from 2019. You can see a marked difference in them. When Nola has a batter set up with two strikes in 2019, he’s throws the curveball nearly 45% of the time. What’s different from this year to last year is that when he does have two strikes on batters and he throws the curve, they aren’t swinging and missing. 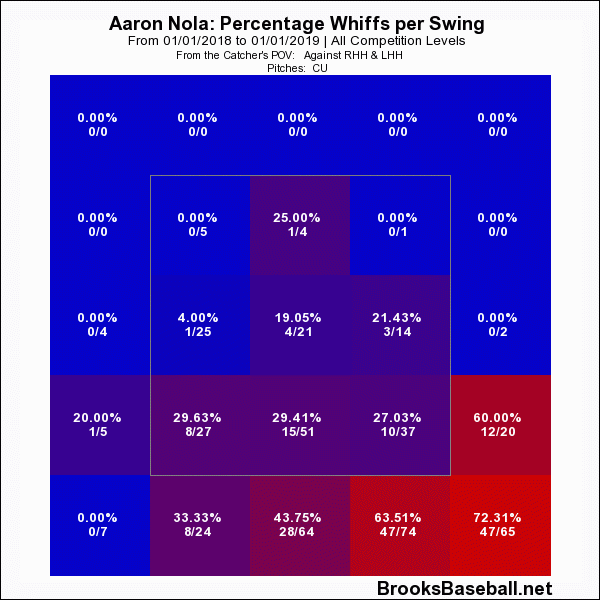 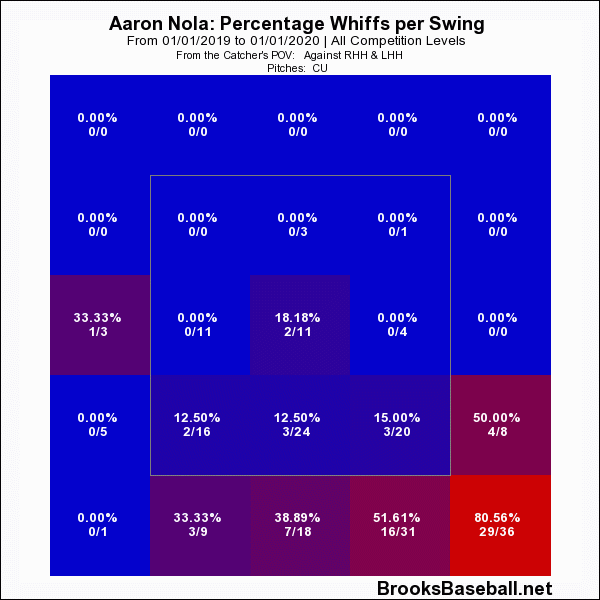 It’s a pretty stark contrast to last year. Hitters just aren’t swinging and missing at the pitch he goes to most often to put away opposing players. While we can’t really point that out as the sole reason he’s struggling, it seems that the batters have gotten the book on him and can recognize his curve and are hitting it with more frequency than last year. It’s something he’s going to have to figure out and adjust, something I’m sure that the coaching staff has already tried to sort out with him.

Nola is having a season reminiscent of Cole Hamels: young ace does really, really well one year and struggles in the next. You could point to more video available, the greater amount of innings that Nola logged last year as compared to the past, whatever. The silver lining and the hope that fans have to cling to is that Hamels adjusted. He would go on to make the adjustments he needed to in order to have success, one of them being developing a new pitch. The cutter was something Hamels created in order to flash something other than the fastball and changeup. Is that a recipe for Nola? That’s for him to decide. For now, though, he’ll keep grinding out starts and hopefully, we’ll see a better version soon. Come October, the team might need him.