Why this lineup, Gabe? Here’s why

When Tuesday’s lineup came out, there were laments. Here’s some possible reasons why it was made this way

Share All sharing options for: Why this lineup, Gabe? Here’s why

For most fans, the playoff chase is over. Being five games behind the Cubs prior to Tuesday’s action and the team playing some pretty uninspired baseball over the weekend, it’s hard not to blame people for being indifferent to whatever lineup trots out these final days of the 2019 season. Even still, when manager Gabe Kapler puts ink to card, there are still surprises. Take Tuesday night!

You can pretty much guess some of the responses.

Oh, we giving up giving up. Got it!

Pirela in stead of Haseley and Sean in place of Franco, ugh.

The consensus was one of disgust and indifference. Many people more or less gave up on watching the game at all. After all, who could blame them?

However, there had to be reasons. After all, Kapler has been steadfast in his belief in individual matchups and putting players in position to succeed. With this in mind, without looking at any results of the game, let’s look at some reasons why Kapler decided on this lineup in the first place.

Who are they facing?

With Dallas Keuchel on the hill, the team would be seeing a lefty that relies on changeups and cutters. He hasn’t changed his profile and heat map a great deal from what he has done in the past, preferring to hit spots low and just outside the zone.

As stated before, Keuchel doesn’t throw a whole lot of stuff that doesn’t move.

So, if the team is going to succeed against a pitcher like this, they’ll have to have batters that have had success with those types of pitches, especially those who are right handed. Coming into Tuesday’s game, Keuchel in 2019 has eaten lefty hitters alive to the tune of a .141/.214/.313 line. Right handed hitters have been better (.281/.354/.424), so it makes sense to have as many righty hitters as possible. So the first part of the strategy is obvious: unless you are Bryce Harper, if you hit left handed, you aren’t facing Keuchel to start the game.

One of the first complaints was that Haseley should be playing every day, especially with the season more or less lost. At some point, we have to see if Haseley can hit lefties with any consistency, especially those like Keuchel who still have flashes of being an elite pitcher. However, looking at it from Kapler’s point of view, he’s still trying to win games. Haseley’s line of .220/.304/.268 proves that thus far, he cannot drive the ball against lefties. It makes sense to start someone else over him if a) a lefty is on the mound, and b) you’re still trying to win games.

Starting Pirela, though, is interesting. Having lost Corey Dickerson for the remainder of the season hurts the team’s offense badly, so choices are limited. Pirela has had nine at bats prior to Tuesday, so we have to look for evidence in previous years to see why he was given the nod over someone else.

In 2018, Pirela received 473 plate appearances with San Diego, so that gives us a big sample size to look at. Pitchers pounded him in the exact same spots that Keuchel likes to hit with his stuff, only he didn’t really do much with it. 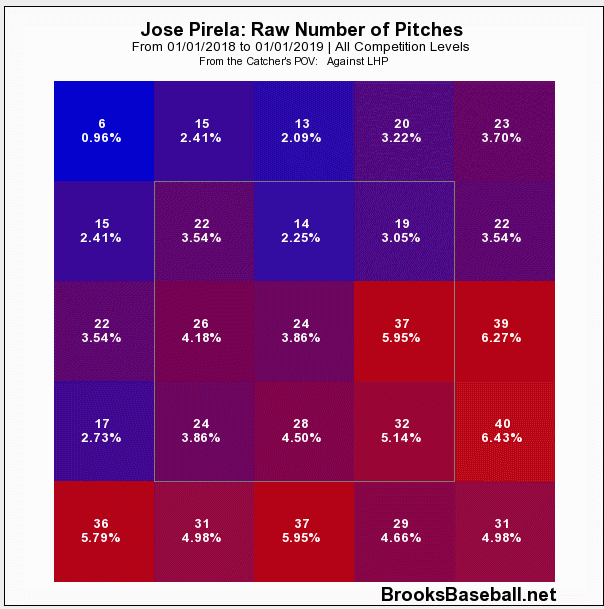 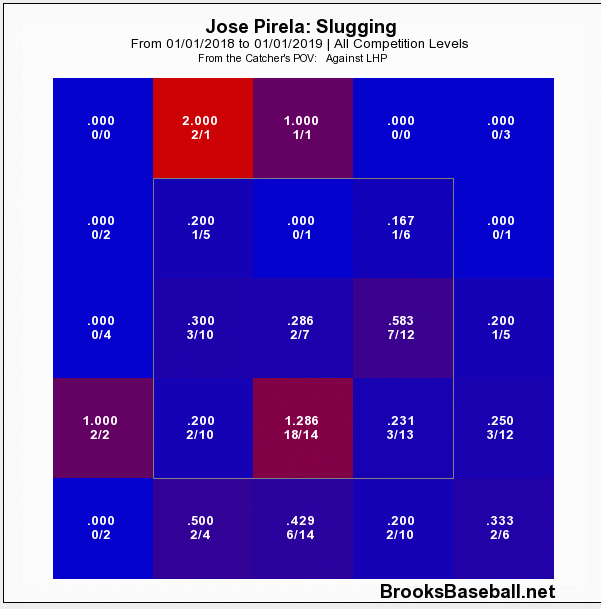 This is probably where most people had a problem with. It’s not like Pirela was all that great against lefties. Sure, his 2018 split against LHP looks ok-ish (.260/.327/.397), but as we see, when he actually had to face a pitcher like Keuchel, he couldn’t do much. So, let’s move to the next decision.

Sean Rodriguez over Maikel Franco at third base

We’ve heard all year how Rodriguez hits lefties well, so this one probably makes sense on the surface. Then you go below the surface and make the “ehhhhhhhhhhh” face. This year, his splits are:

Yeah, it’s not like he’s destroying them, at least not enough to make him the default third baseman against lefties. The problem is that with Dickerson going down, Scott Kingery will be needed in centerfield often, so we’ll probably see a lot more of this moving forward. Why not put Maikel there? His numbers against lefties this year haven’t been bad this year, slightly better than Rodriguez (.237/.318/.433). Well.....

This is what Franco has done against lefties and their sinkers, cutters and changeups, the very arsenal Keuchel has relied on, and what the damage he’s done against them 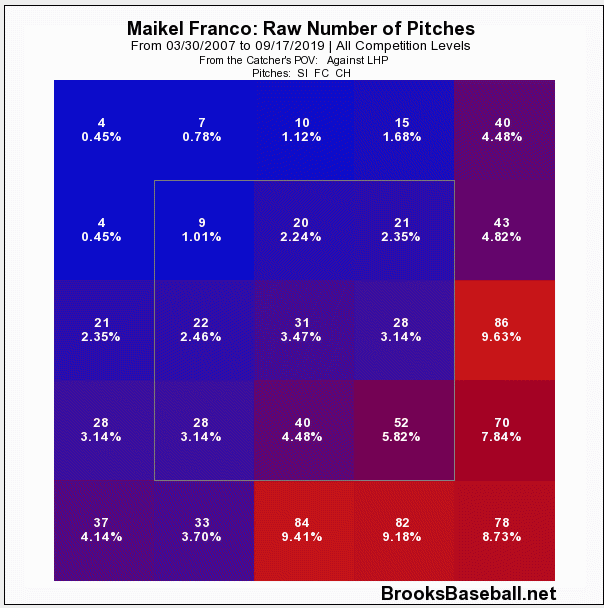 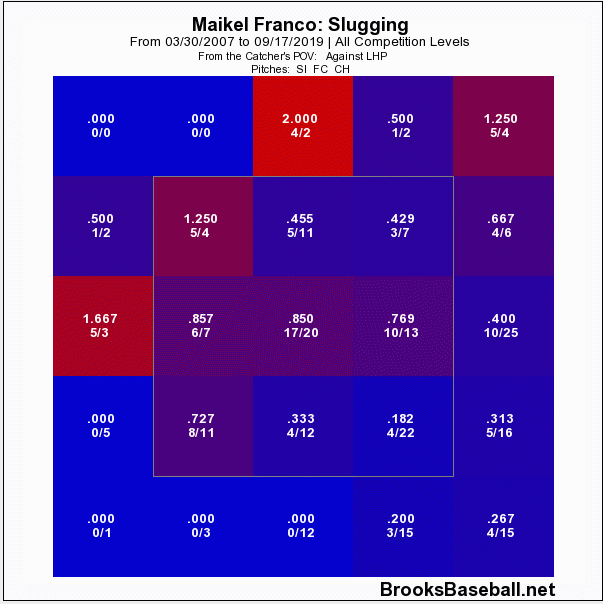 When facing a lefty who has pitches like what Keuchel throws, Franco has been pretty bad with the bat. It suddenly makes a little more sense. Even though Rodriguez doesn’t inspire much confidence, he is probably a better option than Franco.

It’s not like Franco’s defense is something to get worked up over, either. He’s still a below average fielder (career -2.4 UZR/150 at third), so he cannot even use that as a reason to be in the lineup. Put it all together and you begin to see why Rodriguez got the nod.

Listen, I know at first blush, it seems like Kapler is toying with all of us. No one really wants to watch Jose Pirela in the middle of a playoff race, especially when someone like Haseley is the future and will mean a lot more to the team that Pirela ever will. Yet we cannot fault Kapler for trying everything he can to continue to win. If it means making unpopular decisions, so be it. He’s trying to make the playoffs, not win popularity contests. These reasons might be a few of the ones powering the decisions, which doesn’t include some of the advanced stuff the team is sitting on. Based on this evidence, it made more sense to start Pirela and Rodriguez this game against Keuchel than Haseley and/or Franco. There are reasons for what is done in the manager’s office. Sometimes they work, sometimes they don’t. And what do you know?