So what actually happened to Nick Pivetta in 2019?

There isn’t much doubt he’s talented. Most fans think it is a mental issue, but is it? Did the previous regime tamper with a method that shouldn’t have been tampered with?

Share All sharing options for: So what actually happened to Nick Pivetta in 2019?

Nick Pivetta was probably the most hyped player heading into the 2019 season for the Phillies. As I wrote in his year end review, he was also the most disappointing. There was a lot going on for Nick. He started off with three pretty bad starts to begin the year, got sent to the minor leagues to “work on some things”, then went on a stretch where he had five starts of 3.13 ERA baseball, throwing 31 1⁄3 innings, allowing only 7 runs, 11 walks and striking out 29. After this stretch, he struggled once again before being pulled from the rotation permanently in July. He wasn’t happy with the decision, which led to more poor pitching on his part, walking 18 batters in 27 2⁄3 innings as a reliever. It was a lost season for Pivetta, which in turn was a large part in why the team missed the playoffs yet again. Not many teams can go into the season with their second starter being so bad and still have hope of making the playoffs at the end.

So naturally we ask the question: what happened? Where did Pivetta go wrong? Was it a question of stuff? Did he change approach? Where did he go so bad that his entire season was more or less a trainwreck? Even though the ultimate answer to that question probably isn’t so simple, let’s dig a little deeper to see what we can find.

The approach to pitching changed dramatically

In the book by Ben Lindbergh and Travis Sawchik, “The MVP Machine”, the duo look at some of the cutting edge ways teams are approaching development. Since the Houston Astros were so good at cranking out players who succeeded at the major league level right from the minors, they became a team the writers gravitated towards when assessing what teams do right. In the area of pitcher development, they interviewed former Astros employee Mike Fast, who came up with this quote when it came to pitchers throwing their pitches:

This approach to pitching has worked for them thus far, seeing how they’ve had a pitching staff that usually ranks near the top of the league during the past few seasons. So when some of their personnel filters out into the league, it would make sense that they would probably take that philosophy with them. One of those employees was Chris Young, former pitching coach of the Phillies and the one Phillies pitchers would disagree with on a lot of things.

Looking at some of the data available to the public, it’s pretty plain to see that this approach was taken with Pivetta headed into the 2019 season - identify your best pitch from the previous season and throw it more often. In 2018, his best pitch was his curveball. In fact, among 50 qualified starters in 2018, Pivetta’s curveball was ranked seventh overall, ahead of pitchers like Jacob deGrom, Jose Berrios and Zack Wheeler. Seeing as how it was such a good pitch, the team more than likely asked him to lean on it more in 2019, a tip that the data bears out.

According to Brooks Baseball, Pivetta increased the percentage he used his curveball from about 22% of the time to about 35% of the time. There’s nothing actually wrong with this strategy. It makes inherent sense that you’d want to throw your best pitch the most. It’s the one that gets the outs when you need it. Yet it seems like Pivetta lost the ability to get outs with his curve. Hitters improved pretty dramatically against the curveball, simultaneously swinging and missing less,

while also doing more damage against the pitch.

Not exactly the trend one wants to go with when using his best pitch. Yet, it wasn’t just because Pivetta was throwing the curveball more that hitters were achieving more success against him. He also struggled with throwing it in spots that were beneficial to him.

Once Pivetta started to lean on his curve more, it would have behooved him to put it into spots that hitters wouldn’t be able to do anything with. This is the weird thing. Look at where he is putting the pitch in 2019 than in 2018. 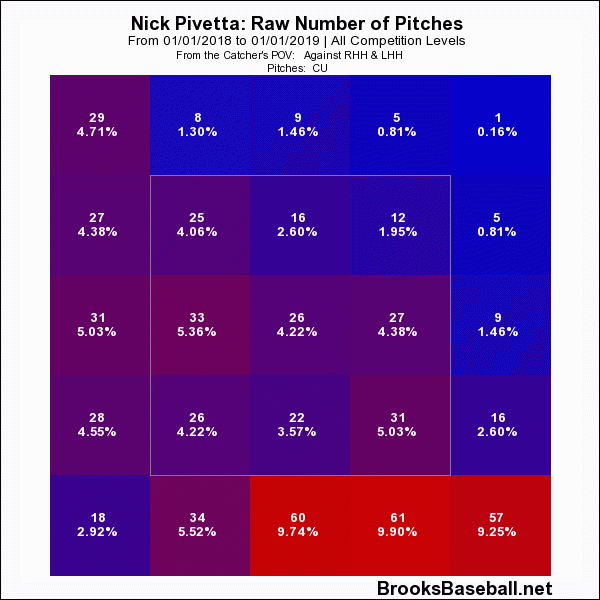 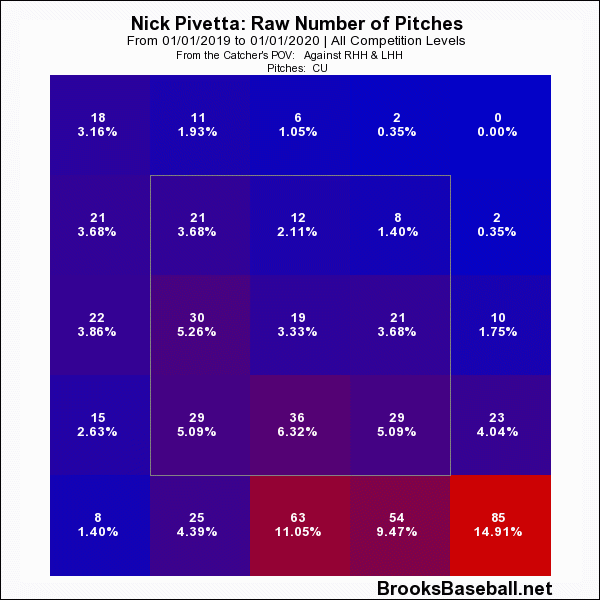 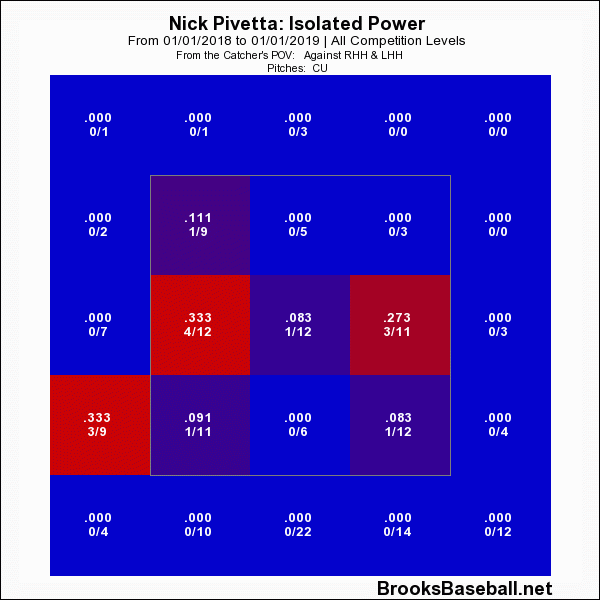 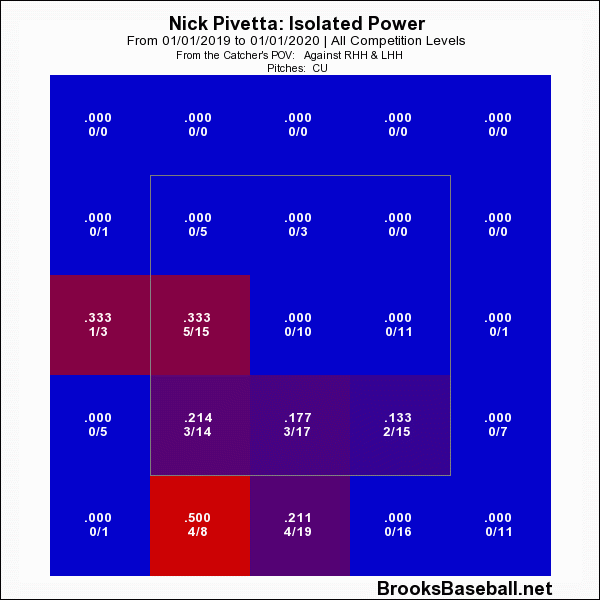 When the pitches were low in 2018, the hitters did nothing with them. When they were low in 2019, they achieved more success. This speaks to the possibility that because Pivetta used his curveball so much more in 2019 than he did the season before, hitters were getting better looks at it and were able to do more damage against it.

I want to go back to something. Let’s look again at Pivetta’s pitch usage chart the past two seasons.

Every pitch went down in usage from 2018 to 2019. We’ve already established that the reason is because the coaching staff was looking to have Pivetta throw his best pitch more often. Yet perhaps the answer is not in his throwing the curveball more often. Perhaps there is another pitch he needs to incorporate more often as well.

In 2018, we can see that with Pivetta’s stuff, he was getting a lot of swings and misses with everything he threw.

The pitch that sticks out to me, though, is his slider. The whiff percentage, though still declining, doesn’t drop as much with his slider as it does with his other pitches. Basically just one percentage point. The other pitches are only dropping two or three points, but his “best pitch” drops the most. Hitters, as we saw earlier, swung and missed less with his curveball; this chart just shows exactly how much more. It’s quite possible that when the team decided to go so far with his curveball, they forgot about the other pitches in his arsenal and how effective he could actually be when using them. Yes this is all small sample size and that it’s probably nothing, but there might be something to it. The answer to his getting back on track could lie in finding that precarious balance that is needed to make him a more complete pitcher.

Of course, one thing that Pivetta has never been known for is his command of the strike zone. It’s pretty well known that he has had trouble throwing quality strikes when pounding the zone, which leads to his giving up the frustrating home run that he seems to be known for. That is the first thing that Price needs to fix with Pivetta, getting him to gain better command of the zone. But there also has to be some things that have to be undone from the previous group that had their hands on him. As stated earlier, there’s nothing wrong with him throwing his best pitch more often. Yet it seems like that philosophy was taken too far to the extreme with Pivetta in 2018. It’ll be up to Joe Girardi and Bryan Price to make sure they can come up with a better gameplan for how Pivetta will pitch in the coming season.

This all might seem like one little thing can explain away Pivetta’s troubles in 2019. That’s not what the point of this is. Anyone who watched him pitch last year saw a pitcher that just wasn’t that good, not even for a team that desperately needed someone, anyone, to step forward. He was given the chance and could not take the reins and run with it. But with a new group and new season dawning, and with no other pitching transactions made thus far in the winter (it’s still young though!), it seems likely that Pivetta will be given one last chance to get it right. There’s a reason teams have reportedly made numerous inquiries into his availability, and there’s also a reason he hasn’t been shipped out of town. Maybe they see a different role for him, maybe they’re going to give him that last shot at locking down a rotation spot. Who knows! This just seems like a viable reason Pivetta struggled so much in 2019. Let’s hope something can be figured out to make him better able to use the obviously quality stuff he still possesses.