David Phelps was supposed to be good!

Share All sharing options for: David Phelps was supposed to be good!

There was nothing really good about Phelps’ tenure with the Phillies in 2020. He was brought in at the trade deadline to help prop up the leaky bullpen, having put up good numbers in Milwaukee prior to the trade, and good numbers overall since 2016. He was going to give reliability to a group that had none.

Sure that strikeout rate is pretty good, but is that what we’re going to cling to? How many guys he struck out in 7 2⁄3 innings as a Phillie? I guess we’re going to have to if we want to find any redemption in his season.

He was supposed to be good.

I mean, the numbers speak for themselves don’t they?

There was never a game where Phelps came in and as a fan, you felt that the lead was safe. He was constantly walking some kind of tightrope that he fell off of and landed on his face. He was just that bad.

Alright, before we move forward, I have to ask:

What happened to David Phelps?

It’s not as though some kind of “bad pitcher virus” was running rampant through the team’s clubhouse, but again, maybe there was. It could help explain why he went from being an effective reliever for the past four seasons to essentially becoming the last guy you’d want to see trot out of the bullpen (well, second to last).

So what exactly happened?

Taking a brief scan of his usage patterns and whatnot, he seemed to veer away from using his four-seam fastball in favor of a sinker in 2020, something that didn’t exactly give him the results he had seen in the past.

While his sinker usage was going back to his pre-2016 levels, it wasn’t exactly the worst idea in the world for him to be doing it. It’s not like players were killing the pitch. In fact, one might even argue that trading in more sinkers and using fewer four-seamers was the right idea. Here are contrasting barrel percentages for the pitches. 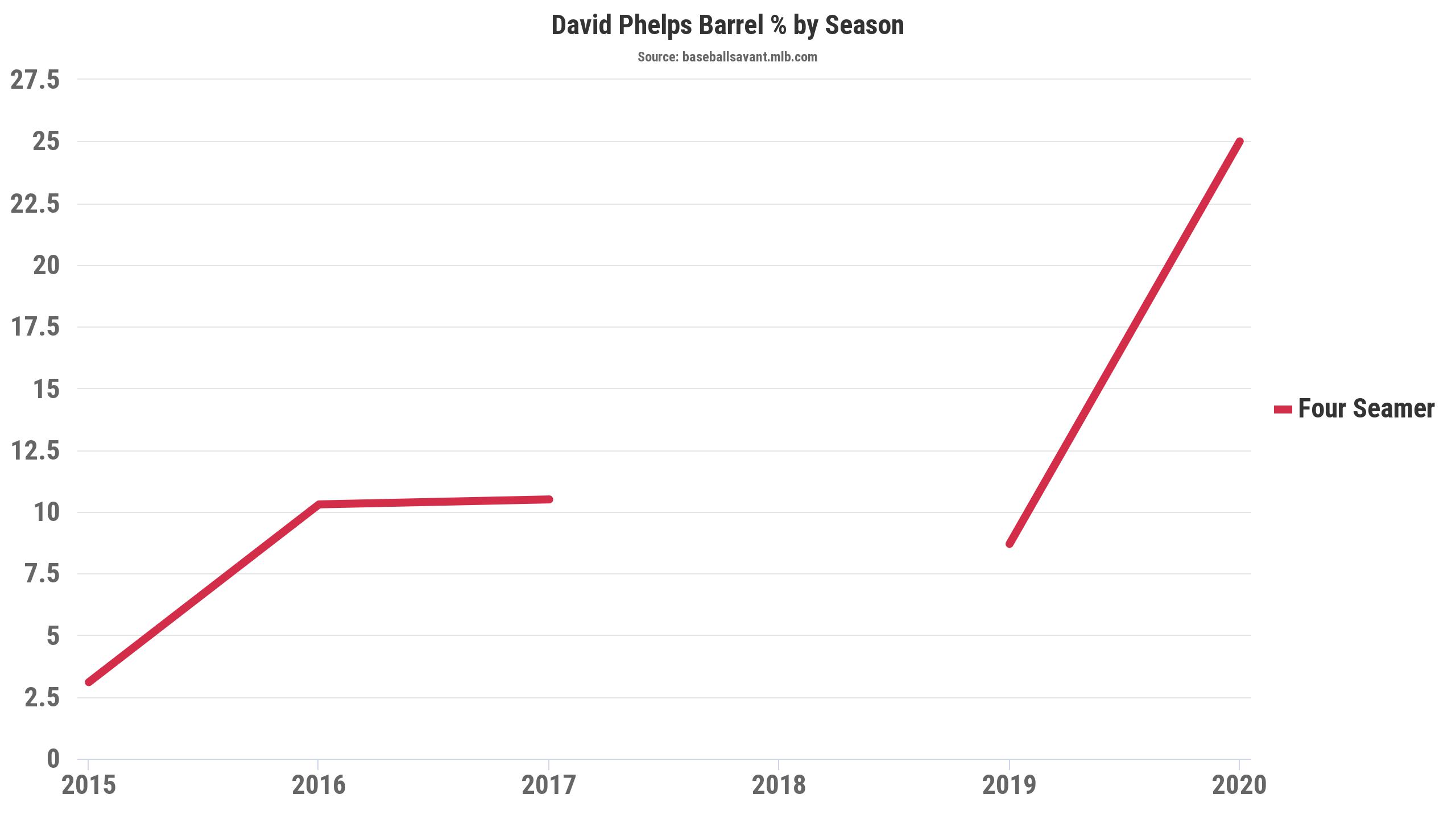 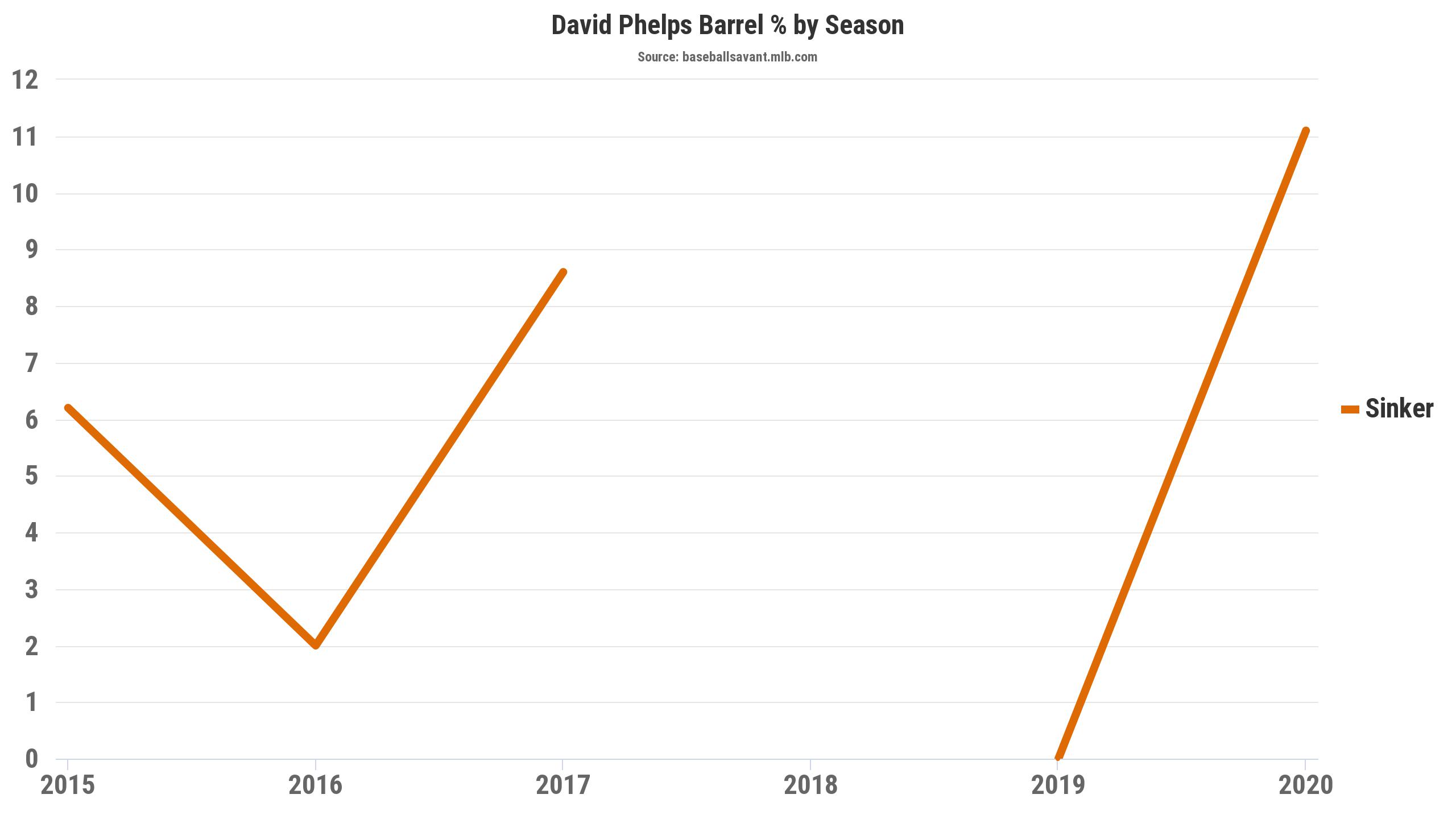 While yes, the sharp increase on both is concerning, I’d much rather that a ball sinking as it approaches a batter be barreled than a four seam fastball. Those tend to leave the yard more often.

Oh, and in case you were wondering?

Yes, everything was getting barreled up in 2020.

There is a quick and dirty way to kind of explain all of that barreling up as well. It is kind of obvious that when a ball is left in the zone too often, or at the very least near enough to the strike zone, it’s going to get hit and get hit hard. Part of Phelps’ problem in 2020 was that he wasn’t where he wanted to be with his pitches. 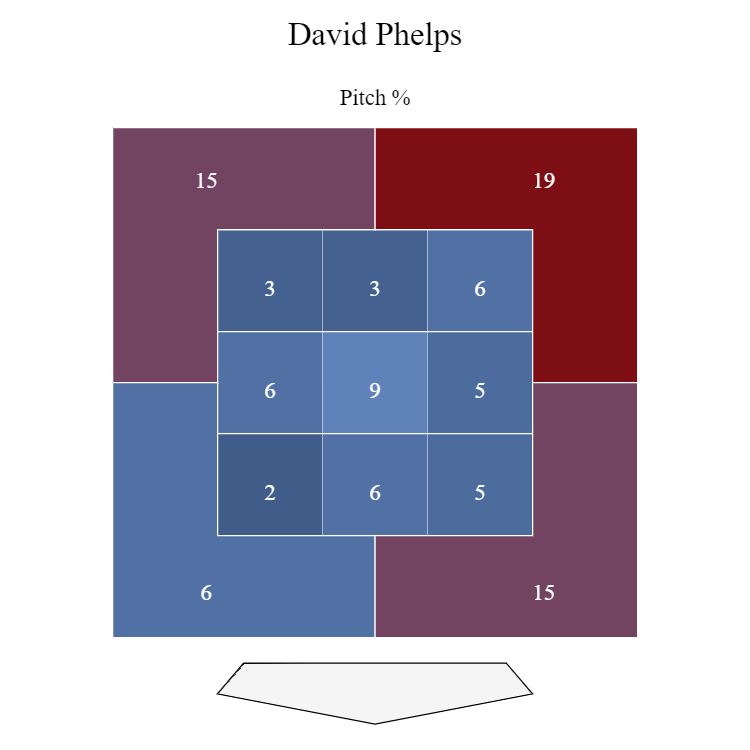 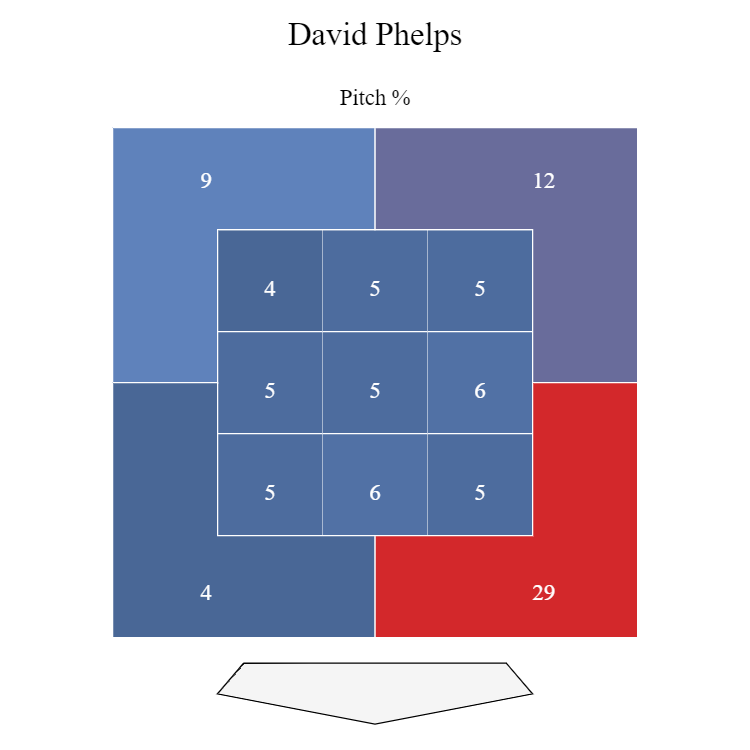 The image on the left is where Phelps’ pitches were located in 2020, the right obviously being 2019. He was finding his pitches way to close to being hittable more often last year than he was in 2019 when he was a very effective reliever. This has been a pattern as well. Using Baseball Savant’s zone data, you’ll see that Phelps was far more likely to live in the outskirts of the strike zone than he was to reside closer to the middle.

This is something that can be corrected with more time. Having an abbreviated spring training and subsequent season probably affected more pitchers than we know. Phelps was possibly one of them and with more time to work his command, he’d more than likely revert back his mean of being a good relief pitcher. The team has a $4.5 million option on him in 2021 and with their needing as many relievers as possible, that cost certainty might be enough to get them to pick up that option in the hopes he’d be a bargain. Of course, with the coming payroll cuts, you just cannot know what the team will be thinking, especially since his performance left such a sour taste in the team’s mouth. They’d probably be wise to pick up that option.