Share All sharing options for: What did J.T. Realmuto need to prove in 2020?

Realmuto was at his usual best with his bat last year. His 123 OPS+ was sixth among those catchers in 2020 that had at least 125 plate appearances (third in the NL). His defense was stellar, if a little bit of a drop from his heights on 2019. The advanced defensive numbers dropped off a bit from where he was, but he still was one of the elite catchers with the glove, being an above average pitch presenter and a strong armed receiver that halts a running game.

HIs peripherals, save one alarming one, were all quite good when compared to 2019. 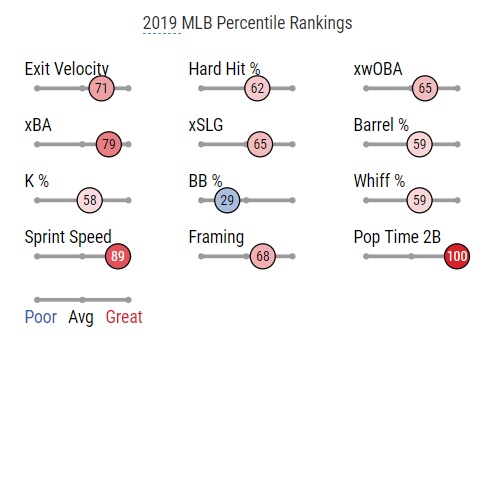 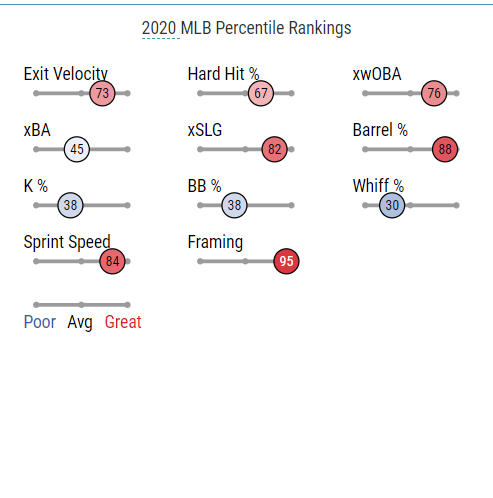 Seems like a lot of his season was the result of some bad luck and perhaps some residue of the injury he suffered that caused him to miss some time.

Now, let’s be fair here. His dropoff with those advanced numbers has to be a bit concerning. We’ll get into his future in a second, but the fact is that Realmuto will be entering his age-30 season and saw a slight decline with his glove. His reputation as the “best catcher is baseball” is still intact, but it’s not like he holds that title by a country mile. There are still several catchers that present a similar skillset that are catching up with him.

Digging a tiny bit deeper in those advanced stats, we can see that his position among the top catchers with regards to framing fell out of the top ten in the game from 2019 to 2020 according to Baseball Prospectus. Switching over to Baseball Savant and the picture gets a little less concerning. According to their research, Realmuto was actually second among all catchers in 2020 when it came to presenting pitches, an improvement over his sixth place finish in 2019. The only issue with that is 2020 presented much fewer chances for players to fall or gain places as there were simply fewer pitches thrown last year. That makes the 2020 data a little unreliable. Not enough to throw it out the window, but enough to take it with a grain of salt.

Offensively, the biggest wart of his season was the large jump in his strikeout rate. Not something you want to see from a player of any caliber, but it could cause a few red flags to fly for evaluators.

It’s the big question, isn’t it?

Rarely has the fate of the franchise hinged so much on one player and how the team approaches him. On the one hand, if the team does re-sign him, they gain a lot of traction in their bid to making the postseason as Realmuto would help a lineup that currently doesn’t project to get much of anything from the catcher position. Adding him is adding somewhere from 4-6 WAR next season alone.

On the other hand, not re-signing him could have a ripple effect on the roster and the fanbase. While the organization should rarely heed the advice from people commenting on the team, they are not so stupid as to ignore to possible revolt that could happen if Realmuto goes elsewhere. Interest in the team would likely plummet as well as the on-field product as they’d be ripping away a vital piece of the team and replacing him with quite literally replacement level players.

There is also the argument that no re-signing him may be the right decision as investing in a catcher that is about to enter his 30’s may not be the wisest use of “limited” funds. There are plenty of people that have made the argument that the team would be better served by not getting Realmuto, taking that money and applying it elsewhere and honestly, it’s not the worst idea to have.

It’s an extremely difficult decision, made all the more difficult that it seems the team’s financial outlook is having more of an influence than perhaps it should. The team, the one that signed Bryce Harper to a $330 million contract, that laid off 80 people at Thanksgiving, that is going out of its way to make sure people know they aren’t flush with money, quite literally isn’t sure if they can afford Realmuto and may have to content themselves with the sight of his walking out of the door with no return.

People might take his departure a little openly if the team used the savings of not paying him and reinvested it in the team, but until we actually see that plan in action, we’d have to assume the team has gotten worse with no idea how to get better.

It’s easily the biggest issue of any team this offseason. Let’s see where it ends up.