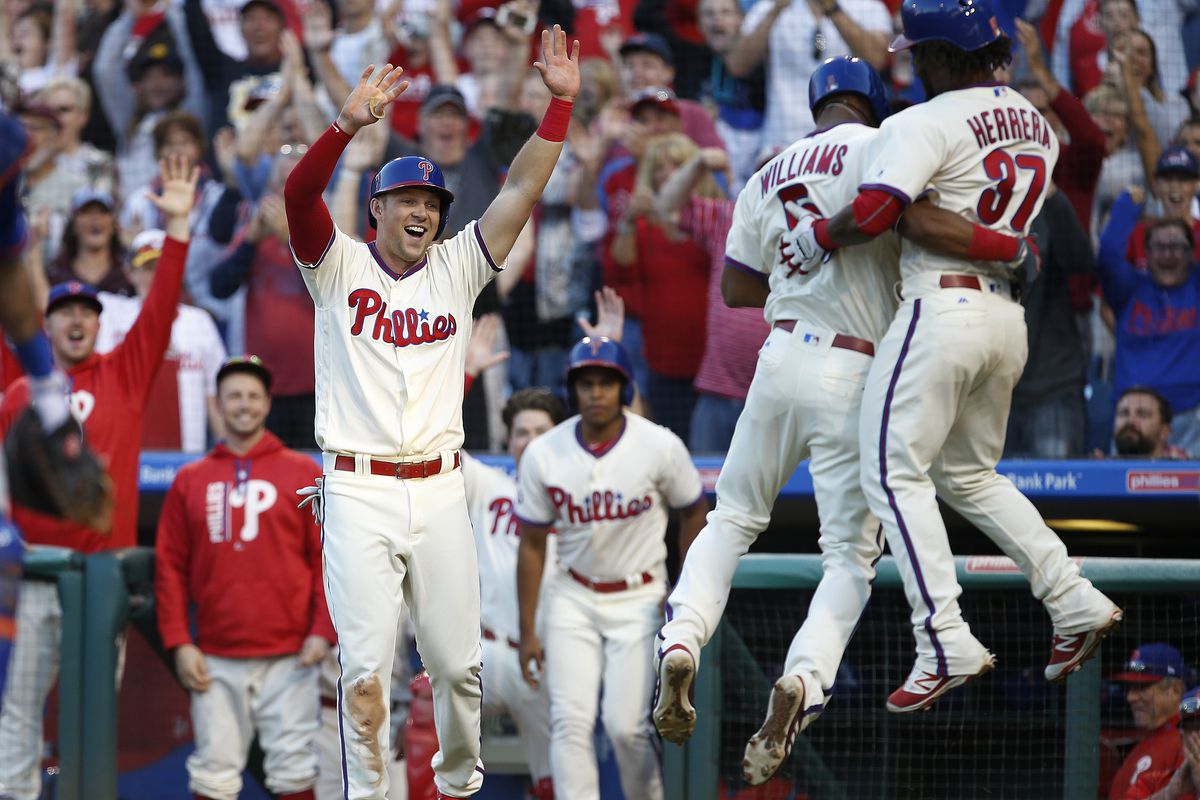 A mediocre team at the surface, the 2018 Phillies were a surprisingly fun team to watch when they got hot.

Takes some time to think of good ideas for a post these days, huh?

Anyways, as I've been getting prepared for 2021, and whatever maniacal plans the duo of Sam Fuld and Dave Dombrowski have in mind for the team, I thought back to last season. Remember the jubilation that team brought us? With returning potential stars Aaron Nola and Rhys Hoskins, and the shiny new faces of Bryce Harper, J.T. Realmuto, the always reliable David Robertson, and the former MVP Andrew McCutchen, this team looked to be destined for big things. Maybe not a title just yet, but a promising 95+ win season? Wouldn't have been too crazy.

Yet, they crashed and burned terribly in the final months, kicking themselves out of first place, then out of second, then out of the playoff race altogether. Sure, injuries played a big part in that, as 90% of our bullpen was being carried off the field via helicopter each week, and that meant inexperienced filler names needed to come in and save us, like Drew Anderson, Austin Davis, and... who could forget this absolute Adonis of a man: The legendary, luscious, luxurious... 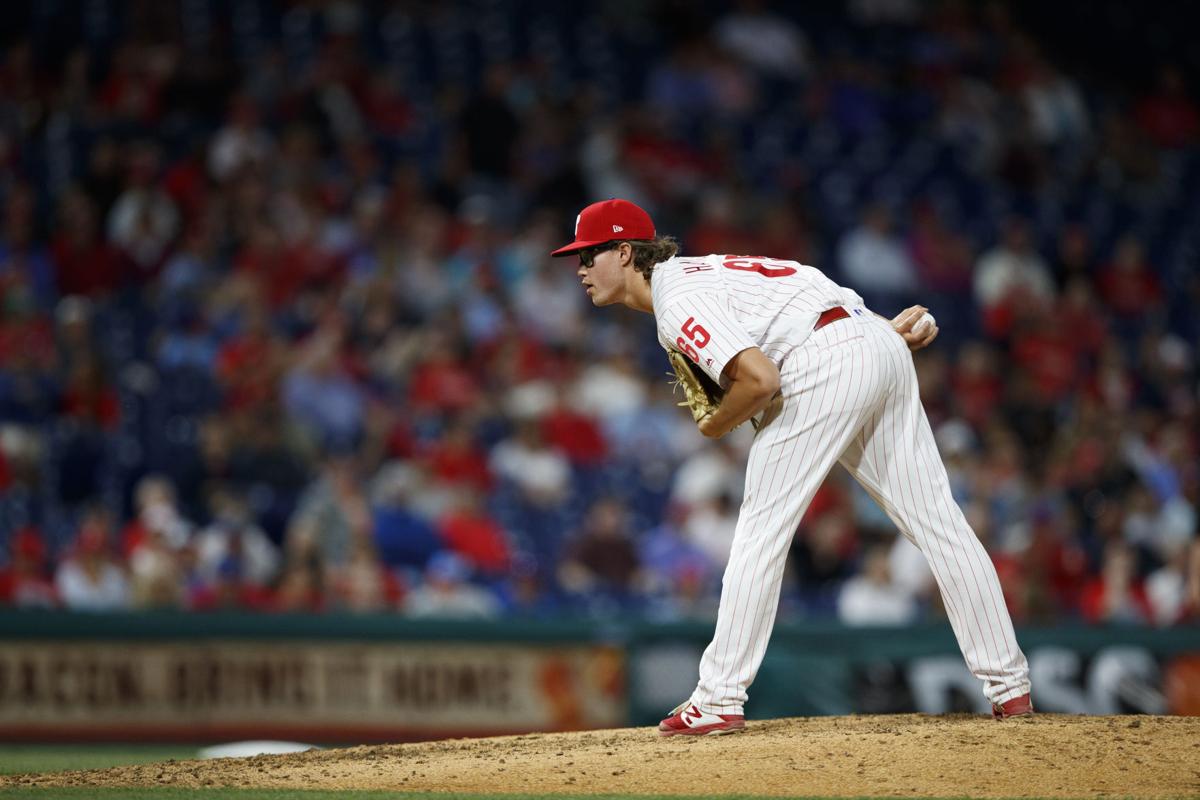 If you can't tell, I really like the dude. But my undying love for J.D. Hammer is for another time. Let's get back on track.

The 2017 Phillies were 66-96. And not too much on the roster was different enough to make them contenders.

Sure, we had Jake Arrieta, and Tommy Hunter, a reliable bullpen arm, and Pat Neshek back, plus a new manager in Gabe Kapler, but compare the 2017-18 offseason to the 2018-19 offseason. They weren't extremely aggressive like they were in the 2018-19 offseason, as they weren't pushing to be a serious contender yet. The 2019 Phillies were more designed to be contenders, and had the big names to do so.

Which FINALLY gets me to the main point of the article.

Although the 2018 Phillies had an even worse, and on paper, a more crushing finish than the 2019 Phillies, they were still arguably more fun to watch get hot. *ducks* Ok, fine. They were still one of the more fun Phillies teams to watch in recent memory, when they were hot. So allow me to sell you on that idea.

Well, OK, rag-tag probably isn't the right term to use. They weren't entirely just a bunch of dudes thrown together on a team for 162 games. But comparing them to the Phillies team from a year later, or, hell, even now, and you'll begin to see why not a whole lot was expected of them, maybe around 75 wins at best.

(*Arrieta was injured at the time of the announcement, but had a start scheduled for April 8th, and well, he was here for the whole year basically, so I'm including him, damnit)

At face value, you probably can see why expectations for the 2018 Phillies weren't too high. A Bleacher Report article from February 9th (to be fair, it was before Arrieta signed with the Phillies, as well as before Yu Darvish and J.D. Martinez were picked up by the Cubs and Red Sox, respectively) placed the Phillies at 73-89, with not much to say other than that them and the Braves were at "similar points in their respective rebuilds" and were "still in the process of developing and assessing their young talent" but were "seeing some of the fruits of their labor in the form of a few more notches in the win column." The Braves only finished ahead of us in their prediction by one game, at a 74-88 record.

You can't really look at a team's roster as time goes on during a season (unless there is a site than can do that and I'm just dense), so I guess you can look at the box score of the final game and try to fill in some blanks.

So, what did the lineup look like for that final game?

Well, here's everyone who played that game:

Aaron Altherr was sent down, but recalled in September. No traditional starters were used, but some are obvious and can be picked out easily. Aaron Nola, Nick Pivetta, and Vince Velasquez all pitched 30+ games, so we know they LIKELY were on the team the whole time. Eflin and Jake Arrieta pitched most of the season as well, so let's throw 'em in the mix as well. Luis Avilan, Luis GARCIA, Yacksel Rios, and Pat Neshek I am willing to bet were still part of the team come September, especially Garcia and Avilan (a trade acquisition from the White Sox). Asdrubal Cabrera was a trade acquisition as well, and otherwise, a bunch of people, like J.P. Crawford, Mark Leiter Jr., Austin Davis, etc. may have been a part of the team as well. But remember: In 2018, September Call-Ups was still a thing, meaning for that month, rosters expanded to 40 players, so that kinda creates a big mess, doesn't it?

By all accounts, you'd think I was crazy to even PROPOSE the idea of the 2018 Phillies being more fun to watch (at their best) than the 2019 Phillies. Truth is, I probably am, but that's besides the point. Check out some of these stats about the teams pulled from Baseball Reference (plus a little more 'cause why not):

I know. I used two different types of WAR. But, one of my friends, a writer for a few different sports sites, AND a host with many of our friends on a baseball podcast (Base-ically Baseball), explained to me how bWAR, or rWAR, or however you wanna say it, is better to use for pitchers, while fWAR is better for position players. So, there. Don't kill me just yet. Besides, no one was really close to either in the top of the team WAR leaderboards for either site. Anyways, yet again, I'm going off topic.

Which brings me to our final point: Star power.

The 2019 Phillies have the BCIB, Bryce Harper, Aaron Nola, Rhys Hoskins, Uncle Larry, and STILL get outpaced in WAR by the 2018 Phillies, and their mostly in-house players.

The 2019 Phillies had the star power. They were supposed to be monsters. In fact, David Robertson, one of their other big acquisitions of the '18-19 offseason ISN'T EVEN HERE. If he didn't get hurt, and kept up with career norms, he would've been an absolute threat.

Now let me go back to what I had said at the beginning of the article (remember that?):

"The 2017 Phillies were 66-96. And not too much on the roster was different enough to make them contenders."

The expectations and attitudes about the team in 2018 and 2019 were, as one would expect, WILDLY different. In 2018, they were pretenders. In 2019, they were contenders.

Let's wrap this up. I need to sleep, and I'm going off the rails.

Yeah, what a buzzkill, and probably a waste of your time. Sorry about that.

But, as I kept writing on, that's what I began to realize.

By value, the 2018 Phillies were fairly comparable to the 2019 Phillies. Similar records, similar most amount of games over .500, similar best months, similar late-season collapses.

The 2018 Phillies had pretty low expectations. Not much was expected of the team, they were just expected to slowly build towards contention a little more. Their team was comprised of some promising youngsters, but not really any big name stars. The 2019 Phillies, however, made huge splashes, got one of, if not, the most coveted player in free agency, a top tier catcher (now the BCIB), and at this point, Aaron Nola just became an ace, and quite possibly elite, entering the season. So, for the 2018 Phillies to still make some noise in a comparable way to the star-studded (kinda), promising 2019 Phillies, is pretty damn incredible.

But, the 2019 Phillies had some great moments the 2018 Phillies can't provide. Sure, the 2018 Phillies saw Trevor Plouffe hit a walk-off homer in a 16-inning marathon against the Dodgers, off of UTILITYMAN Kiké Hernandez, and yes, the 2018 Phillies could ACTUALLY beat the Marlins (including a 20-run beating (they scored 20, not won by 20. I think they won by 17, but at that point, what difference does it make?)), but look at the excitement the 2019 Phillies brought. They racked in the 10th most fans in the MLB at home, and, well, look at the opening day attendance. Remember Rhys Hoskins' grand slam, right after Bryce Harper was intentionally walked? Remember when the team was so good, Maikel Franco, our 8 hitter, was still producing solid numbers? Remember Scott Kingery's red-hot first half, or Harper and Realmuto's dominance in the second half? And of course, you'd be foolish to forget Harper's LEGENDARY walk-off grand slam. What a moment. What a team. And hey, the 2018 Phillies didn't have J.D. Hammer pitching for them, did they? Didn't think so. An automatic +100 cool points to the '19 Phillies.

So, after a admittedly way-too long post, it's time to wrap this up. The 2018 Phillies were good. Like, way better than we remember. But, who can forget what the 2019 Phillies gave us? I don't know if I can truly pick a favorite year out of the two. I somehow managed to un-convince myself that the 2018 Phillies were more fun at their best. But, it's all subjective. Whichever team you prefer the most, we can agree that both teams were good fun, and gave us some good (and bad) memories and snapshots we will remember for some time. Maybe. Maybe more from 2019 than 2018, but... shhhh.

I hope you all had a fantastic Christmas/Kwanzaa/Hanukkah/Boxing Day/whatever you celebrate. I wish you all good health going forward, and here's to a HOPEFULLY better 2021. Remember to stay clean, stay safe, wear your mask (over you nose too), and have a happy and safe New Year's celebration, whether you're with friends, family, or just yourself. Take care!

(Fun side note- This post had been in development for so long the third paragraph went through 3-4 changes to account for the time of year and the Phillies' front office hirings. Sometime, I'm gonna get something done on time. I promise. Hopefully.)