Zack Wheeler isn’t striking anyone out and that’s alright

The Phillies’ #2 has been very good, but in a different way we would have expected

Share All sharing options for: Zack Wheeler isn’t striking anyone out and that’s alright

When the Phillies targeted and signed Zack Wheeler to a huge free agent deal this offseason, it was with the purpose of adding a pitcher who was capable of striking out a batter whenever needed. At the time, the only one who was able to do so was Aaron Nola and the lack of that ability had been a glaring weakness of the starting rotation for the past several years. So adding a strikeout artist topped Matt Klentak’s wishlist as the offseason kicked into gear. Once Wheeler was in the fold, he spoke of how he could be using his stuff a little differently to unlock any potential he still had left. In his introductory press conference in December, Wheeler mentioned that he believes his stuff is similar to Gerrit Cole and that the Phillies’ analytics team would help him reach that peak:

Wheeler said he and Cole are “comparable stuff-wise” — uh, debatable — but he also conceded that Cole is an elite-level hurler while he is not... Or not yet elite. Wheeler said: “I read [Cole is] throwing more four-seam fastballs up in the zone. His slider spin got a little tighter. Stuff like that. That’s stuff I can do also. I just haven’t done it yet because it hasn’t been translated to me that way. So I think now we’re starting to figure that out and hopefully I can take that next step when I start working that into my mix.”

He went on to state how his four-seam fastball might need to get used a little more since his two-seam fastball wasn’t as effective:

“I don’t think it’s a secret these days, so I can say it,” Wheeler said. “My two-seam gets hit a little bit more than my four-seam, so maybe it’s throwing more four-seams. It’s not a big speed difference, so it’s no secret, but maybe it’s throwing more four-seams. That’s one of the smaller things that you can do to get better without having to change too much and get in your own head.”

It makes a lot of sense. When you see one of the best pitchers in the game dominating his competition with an arsenal that is very similar to what Wheeler brings to the table, it would be foolish to not look at what Cole is doing and somehow copycat it. Now that the season has started, it seems that Wheeler has followed through with his intention of trying this theory out, increasing his four-seam usage by about 11% over last year.

Studying this chart, we see that his slider, the famed “Warthen slider” he learned in New York, has seen its usage drop a lot, as well as the changeup. His curveball usage has risen slightly, but he seems to be a two pitch guy right now, relying on those variations of fastball and the slider to get him through the season thus far.

It makes sense to be doing this. As we stated earlier, if Cole can dominate with this stuff, Wheeler should be trying to do so as well. If he was going to copy Cole, you’d also be safe in assuming that the strikeout totals would be higher than they currently are since Cole is one of the premier strikeout pitchers in the game right now. Yet following Saturday’s start, Wheeler’s strikeout percentage sits at 15.7%, a far cry from the 23.1% he had in 2019. Seems strange all things considered, but if you dig a little bit deeper, it looks like instead of the analytics team trying to get him to rack up the strikeout totals, they want him to do almost the complete opposite and use his stuff to involve his defense more often. So what has changed between December and today?

The first thing that’s changed for Wheeler this year is that he isn’t really getting hitters to swing and miss as much as he did in the past on the hard stuff, seeing dips in his whiff percentage for four-seam and two-seam fastballs. What has gone up is the whiff rate for his secondary stuff.

As we saw previously, Wheeler is throwing his offspeed pitches less. This would mean that if hitters are facing his high octane fastballs more often and whiffing less, the strikeout totals won’t be there as much.

The second thing that is different is where he is in the zone. Remember, in December, he stated that it was possible that he needs to throw up in the zone to be more effective with that four-seam pitch. Yet looking at his zone profile, the complete opposite has happened. 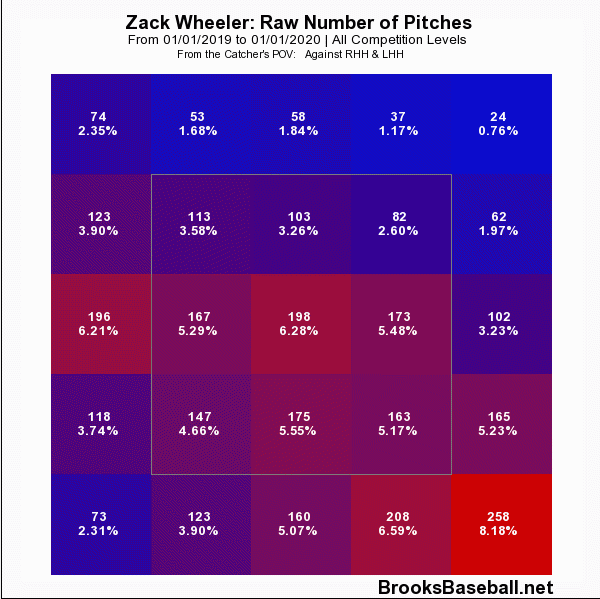 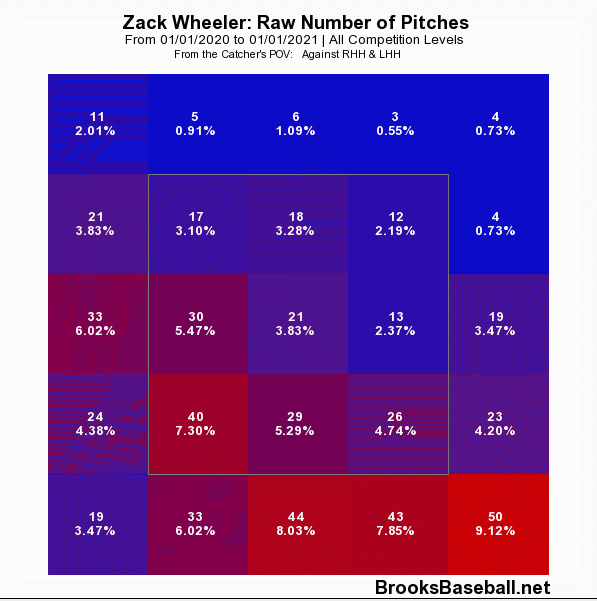 Right now, Wheeler is living in the bottom of the zone. Of course we have to account for sample size between the two years, but it looks as though Wheeler is making a conscious effort to put his arsenal to work at the bottom of the strike zone. Hitters haven’t been able to adjust as his average launch angle has decreased for his four-seam (20* in 2019 vs. 8* in 2020) and his two-seam (8* vs. -3*) over the past two years.

None of this is to say that what Wheeler is doing is wrong, or that it can be narrowed down to these two things. It’s more than likely that there is a lot more going on for Wheeler to help explain his superb start to his Phillies career. There’s no doubt that getting to work with Bryan Price and his philosophy on pitching have had an influence on Wheeler, so that is also a factor to consider. So, perhaps it is imperative for any fan that had an expectation for what kind of pitcher Wheeler should be to change his or her expectations. Whatever Wheeler is doing has been effective so far. He should keep doing it until the opposition adjusts.